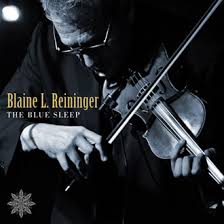 Brand new studio album by the Tuxedomoon man, mixed in Athens last year by producer Coti K. Three tracks from this record were written for the stage production Caligula. LTW’s Ian Canty hopes his scrappy pass at O Level Maths will help in reviewing a LP that has lyrics that were generated algorithmically…..

I wrote about Blaine L Reininger’s second album here and now we find ourselves at the (almost) opposite end of his career, with this brand new 18th LP (that is counting both compilations and soundtracks), The Blue Sleep. There is a sense of continuity however, even with the passing of the years, as Reininger works tirelessly on his muse and burnishes the material often with his trademark violin flourishes. This record mixes both stirring and gentle instrumental themes cut alongside fast and demonstrative synth-rockers, with some detours down some strange roads along the way…..

We commence with a dream-like quality on album opener Public Transportation, slowly moving and eternal, with Reninger’s solemn violin gradually emerging to take the lead. There’s an other worldly, filmic beauty to this which is a thread that continues through the album as a whole. It plays restful instrumental sections against the more up-tempo sounds very well. The bubbling title track provides a showcase Blaine’s deep, almost crooner-ish voice and We’re Tearing Out is a definite highpoint – the mix of electronics and a nice scratchy-sounding guitar having a bit in common with Wire when they re-emerged in the mid-80s.

Lost Ballroom has a neat Eastern feel, a motif that Reininger returns to on the “Twin Peaks in the Orient” that is the beautiful and meditative instrumental Jacob’s Ladder (no link to the Monochrome Set song of the same name). A prominent bass line and stately piano part provide the musical accompaniment to Dry Food’s puzzling story of abusive love and Camminanda Qui is a mess of music, but an appealing one where a scrambling rhythm anchors a volley of competing sounds. The Dull Sea comes over as more a spoken word piece, soberly intoning “The king is dead” to an ominous backing track.

The album finishes with another eerie but lovely drone in Moelcular Landscape and the final track Odi et Amo. Along with Lost Ballroom and Jacob’s Ladder, the latter was written for a theatre production of Caligula. Though your guess is as good as mine with regards as the lyrics (appropriately they are in Latin), even so this is a moving performance vocally by Reininger and the rolling piano and bass power the music along.

The Blue Sleep is a novel musical experience, an album of moods and atmosphere that is not afraid to lead you musically down some seldom trod paths. It’s not full of tracks that would have the milkman whistling on his round (if that still was a thing that happened), but that is not really the point. Blaine L Reninger has added to his already smart canon elegantly with The Blue Sleep.