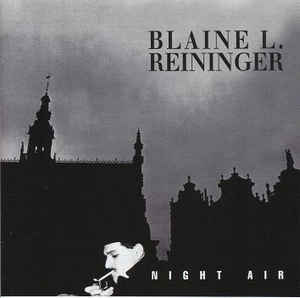 Reissue of the second solo offering of ex-Tuxedomoon Man Reininger, first released in 1983. This version comes complete with a full bonus CD from a live performance taped in Bologna in 1984, plus associated single tracks…….LTW’s Ian Canty feels the chill air of the modern dance……

San Francisco’s Tuxedomoon have been making waves since the late 70s, possibly peaking with the tremendous electro-Punk No Tears single in 1978, but with a great deal to recommend since their debut recording, the Joeboy the Electronic Ghost/Pinheads On The Move single, right up to the modern day. Originally a duo comprising of Steven Brown and Blaine L Reninger, in 1979 they were joined by bassist Peter Principle and later by singer Winston Tong. They issued their debut album Half-Mute on the Residents’ Ralph Records imprint in 1980 and had released a further two LPs by the end of 1982, all of which garnered critical acclaim. Wildly experimental and at the forefront of the electronics scene, Tuxedomoon continued to push through barriers, always following the mantra to “create music that sounded unlike anything else before”.

A year after their third album Divine band leader Blaine L. Reininger decided to leave and joined with guitarist Michael Belfer of the Sleepers to record the LP Night Air (actually his second solo LP having recorded Broken Fingers in 1982 before the split). It was not a complete break with Tuxedomoon as Brown and Tong both featured as guest artists. Also the production of the original album was overseen by Gareth Jones of Wire and Depeche Mode fame.

Ah Depeche Mode….actually quite a good reference point for this recording and those unfamiliar with Blaine/Tuxedomoon. Reininger’s work on Night Air does bear some comparison to what Basildon’s synth tyros were about to do in the near future, shifting from their initial pure Pop freshness to something more gothic but still appealing and electronic. There’s a bit of the “electro torch songs” of Soft Cell about Night Air too. In fact if the stars had aligned we could have been greeted by the odd spectacle of someone so determinedly “left-field” being welcomed into the UK charts. It didn’t happen of course and BLR had to be content with scoring on the Indie listings and lavish praise in the music press.

The kind of beautifully chilled, instrumentally ornate Pop Music that is the benchmark of Night Air is best portrayed by the moving Birthday Song, though it’s not without claws lyrically. “What’s wrong with those half-witted morons?” Reininger exclaims at one point, bluntly articulating his frustrations. Again proving that it wasn’t all sweetness and light, the doomy and foreboding Ash And Bone has echoes of Magazine in the bright rush of sound that acts as a relief against the austere atmosphere. Night Air itself is Gothic Electro incarnate, spooky and exotic.

Night Air features some instrumental tracks that although wordless are quite lyrical in their own way, like the film music of Intermission or the violin/guitar jangle of L’Entree De L’Hierophante. There’s also Beak People which pre-empts the kind of sound Wire perfected on their return at the end of the 80s and some great “New European Pop” in Mystery And Confusion. Overall a very satisfying album that strikes out in a different direction to Tuxedomoon without seeming totally out of character.

The bonus tracks that come with this disc include a single take of Mystery And Confusion and a couple of versions of Crash, a nice piece of fast instrumental Synth/Punk. You could say that Vini Reilly’s jangle of The Sea Wall is not unlike the sound the Smiths came up with around the same time and the stately Electro of Bizarre Bizarre recalls Berlin-era Bowie.

The live album that accompanies Night Air contains material from both that record plus previous album Broken Fingers. It is a solid addition to this set. Reininger seems in relaxed form, ably supplying deadpan adlibs in front of an appreciative Bolognese audience. Spiny Doughboys is driven by a manic violin and crackles with a similar sort of strangeness to the Stranglers circa Meninblack and also Jean Jaques Burnel’s solo adventures. If anything the live version of Ash And Bone betters the studio takes – a slowly emerging beauty that suits Reininger’s almost crooning vocal to a T.

The alarming Downtown mines a similar psycho horror seam as early Suicide, contrasting sharply with the slow (in fact barely moving at all) Sons Of The Silent Age and Magnetic Life’s Pop pulse. It all comes to an ends with a brief but faithful blast through of That’s Amore from the gig’s soundcheck.

This edition of Night Air has been beautifully put together (bit of a trademark of Les Disques du Crepuscule) with the bonus tracks and live set all enhancing the original album in fine style (there is an informative sleeve-note within too). The live material offers a decent introduction to Reininger’s work, including the cream from his first two albums. Kitted out with a new remastering job, Night Air sounds great. It gives Reininger and his band sparkling audio quality and the material on offer is diverting, delightfully odd almost-Pop Music. A hidden jewel, revealed for you to see.