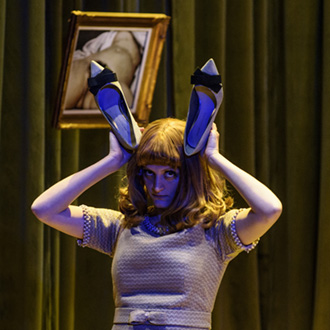 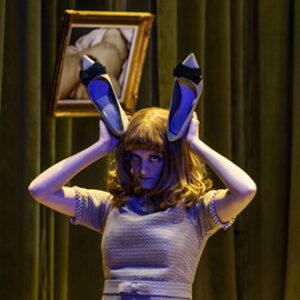 Music recorded between 2015-2018 for dance and theatre productions by Tuxedomoon man Blaine L. Reininger, including his work for Angels, Caligula, The Kindly Ones, Reigen, Picnic With the Devil and Who’s Afraid of Virginia Woolf?, this set is a sequel to his 2014 set Commissions. LTW’s Ian Canty looks to take things a stage further……

This new collection takes in various recordings for stage productions by Blaine L. Reininger, violin supremo of post-punk legends Tuxedomoon. Consisting of pieces developed for stage presentations of Angels, Caligula, The Kindly Ones, Reigen, Picnic With the Devil and Who’s Afraid of Virginia Woolf?, this is a document of a highly productive three year period in the world of theatre for the man. This work included, among other feats, Reininger being the devil with a uke in The Master and Margarita and appearing as a one man band providing musical backing to Caligula’s unsavoury acts.

The acid test of Commissions 2 is whether it works as a coherent listening experience and that the musical pieces can stand on their own away from the plays and dance shows they were constructed for. This is something that isn’t a given, bearing in mind the number disparate projects the music is drawn from. Different moods and sounds for different stories and presentations and all that. Having listened to it, for me they seem to fit together fairly well and have been appropriately sequenced to achieve the best effect. Each disc is different though, with disc one having more in the way of brooding, cinematic instrumentals, whereas the second disc offers more in the way of actual songs, particularly towards its conclusion.

Commissions 2 begins with Im Eiswind, from The Kindly Ones by Elli Papakonstantinou. Its deep bass sounds, piano and electronics evoke the feeling of a slowly and elegantly constructed atmosphere. Coming from Caligula, Freak Jazz brings to mind Tuxedomoon’s Ralph Records labelmates the Residents in its twisted Avant Garde approach, strings being applied expertly throughout. Interluce, from the same show, is more spacey in both senses, with what sounds like a hurdy gurdy picking out the notes.

The title track from The Master and Margarita nicely sketches an emotional map through drones and a lovely acoustic guitar line and Twilight Fields, again coming from the soundtrack of The Kindly Ones, possesses a neat choir effect offset against some harsh noise and muffled whistles. It works very well indeed and the first section of this set ends with Don’t Forget Of Me’s distorted voice and synthetic landscape.

Now to move on to disc two, which is heralded by the gentle electronics of Because It’s Me. This is taken from the Who’s Afraid of Virginia Woolf? stage show and is really the first true vocal/song of the set and a good one too. The fuzz of Dark Alley is a lovely doom-scape minded from the same show, with some sweet bells sounds working well against the roughness. Novvy Kover follows having some sweeping, tremulous synths to give it an orchestral feel and the electric guitar strum of Dialogismos is melodic, hypnotic and dreamlike.

In contrast Terrible Father appears thrillingly haunted, with the kind of slow but steady momentum giving the creepy feeling one may have when being pursued by a ghostly apparition. Rilke Elegy hangs in the air with a static, eternal beauty and Mombalaya (taking as a starting point Hank Williams’ Jambalaya) has a distant voice keening against a lovely musical background, which brings Commissions 2 things to a fitting and theatrical end.

Overall this is a satisfying collection that one can enjoy without the visual accompaniment of the stage productions. Commissions 2 successfully combines the work of six shows into something that runs in a logical and pleasing fashion, hitting peaks and then delightfully ebbing away. A different kind of listening experience for sure, but one that is very rewarding if you give yourself the time and environment to enjoy it in.