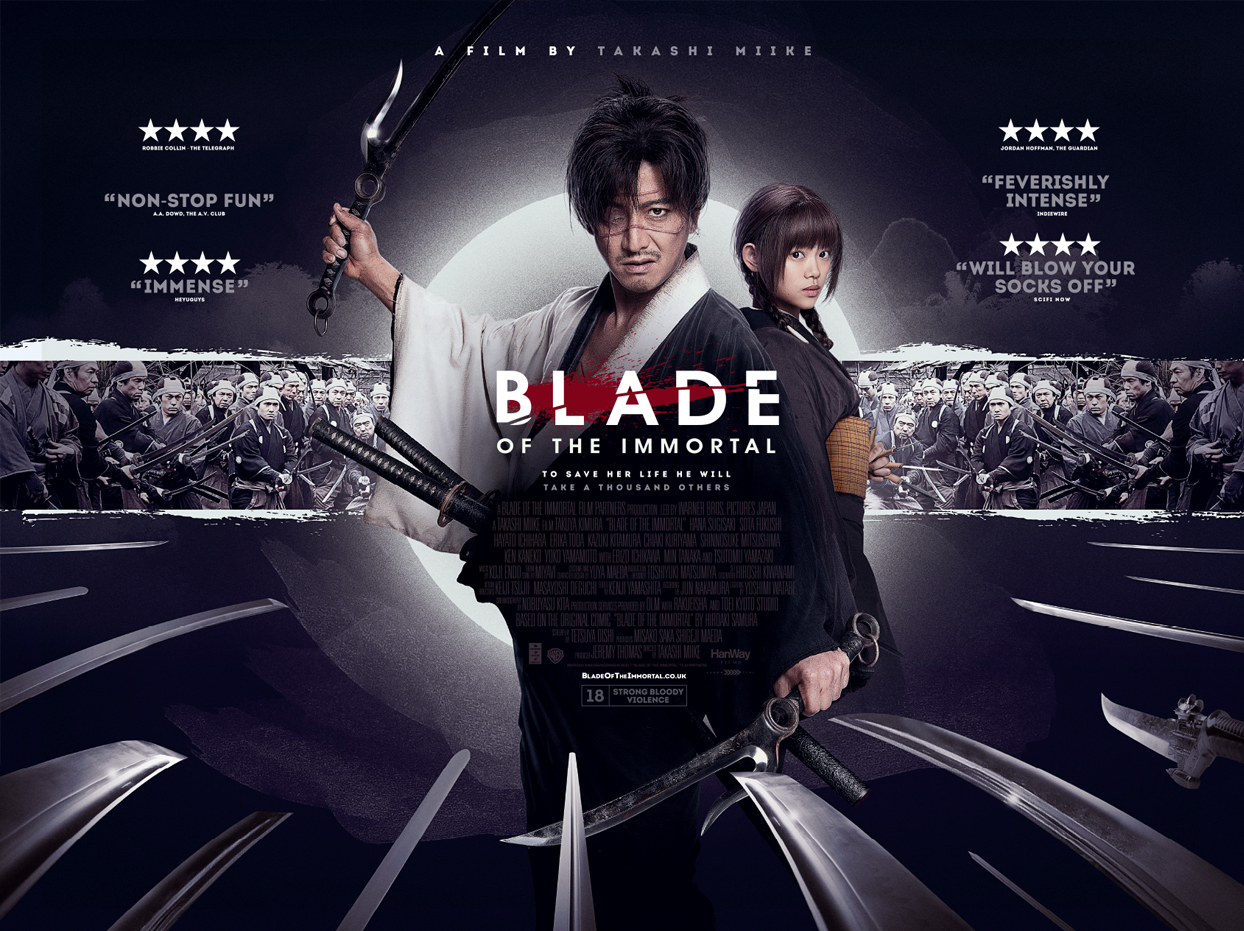 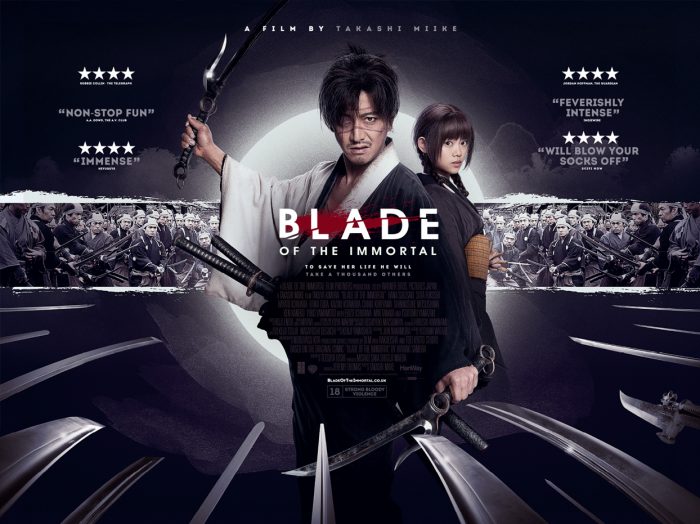 Even those with no knowledge or interest in the Japanese samurai Manga comic series by Hiroaki Samura, upon which this Jeremy Thomas produced picture is based, will derive great pleasure from Japanese director Takashi Miike’s one-hundredth motion picture. Yes, Takashi Miike, born in 1960, has directed 100 movies!

Those familiar with just a fraction of Takashi Miike’s previous work – Audition (1999), Ichi the Killer (2001) and the incredible 13 Assassins (2010), to name but a few – will know the Japanese director never fails to take everything into the glorious realms of excess, no matter what genre he happens to be working within. Aided and abetted by English producer Thomas (who previously produced Oshima’s Merry Christmas Mr Lawrence, ‘Beat’ Takeshi Kitano’s Brother, Bertolucci’s The Last Emperor and Miike’s 13 Assassins), Takashi Miike delivers yet more cinematic overkill. Yet the great cast, witty script, amazing cinematography and choreography make this admittedly long picture (140 minutes in length) a thrill from bloody start to mind bending climax.

Japanese pop superstar Takuya Kimura is excellent as the extremely dexterous samurai, Manji. A ‘hatamoto’ samurai who serves the Shogun, Manji becomes an outlaw when he kills a corrupt superior and six of his bodyguards. Unfortunately, one of these men is the husband of his younger sister, Machi, who consequentially loses her mind. Afterwards, brother and sister find themselves on the run. 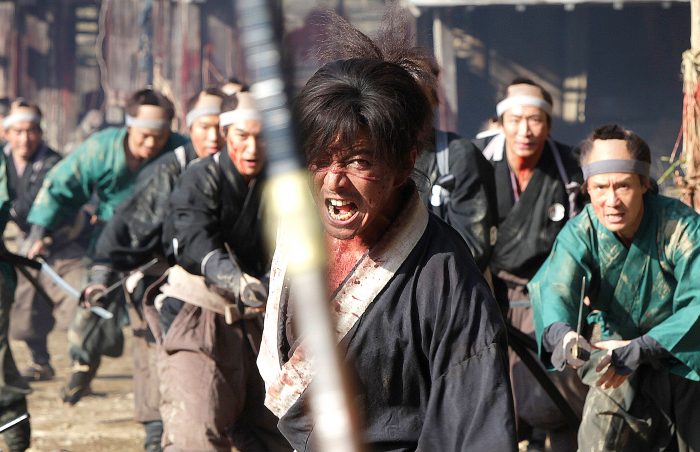 Having fought an epic battle against at least a hundred enemies to avenge the murder of his beloved, mentally ill sister, at the point of death Manji is visited by a clocked, ancient, witch of the woods figure, Yaobikuni. The crone pours vile Sacred Bloodworms of the Holy Lama into one of Manji’s many wounds, ensuring that he is blessed, or cursed, with immortality. Manji realises that only by fighting for justice will he eventually be able to redeem his fractured soul.

Fifty years later: the now legendary Machi is approached by a girl named Rin Asano (Hana Sugisaki), who bears an uncanny resemblance to Machi. Rin was the only child of Tadayoshi Asano, head of the ‘Mutenichi-ryn’ school of fencing, with the reputation of being the most influential dojo in Edo. Young Rin was training to become the head of the school, but one fateful night the ‘Mutenichi-ryn’ is overrun by the messianic Kagehisa Anotsu (Sota Fukushi) and his ruthless followers. The anarchic Anotsu, who adroitly uses a bizarre looking axe, leads the Itto-ryn style of fencing that does not acknowledge any other school or discipline and utilises many deadly techniques. Wishing to make all the schools of Tokyo serve under his dictatorial leadership, he gives Tadayoshi an ultimatum: submit to the Itto-ryu school or die. When Tadayoshi refuses, he is killed, his wife raped and abducted, while the whole Mutenichi-ryn school is destroyed. Only Rin Asano is left alive.

Sworn to avenge the murder of her parents and the destruction of the school, Rin Asano eventually persuades the initially reluctant and cynical Machi to help her. Cue endless sword fights, fountains of blood and severed limbs, all liberally laced with dark gallows humour.

Also, somewhere amongst the outlandish story and sword/axe/chain and staff fighting, there is a moral to be gleaned from Blade of the Immortal concerning the quest for violent revenge and the true meaning of mortality.

If you have a strong stomach, and enjoy watching copious, ultra-violent, black humoured Samurai massacres, Blade of the Immortal is just the ticket as the perfect antidote to traditional Christmas festive cheer. The less you know beforehand, the more you will probably enjoy Blade of the Immortal, so just brace yourself for cathartic carnage.

Blade of the Immortal is released in the UK on 8th December by Arrow Films.

To find a screening near you visit the film’s website here: bladeoftheimmortal.co.uk.