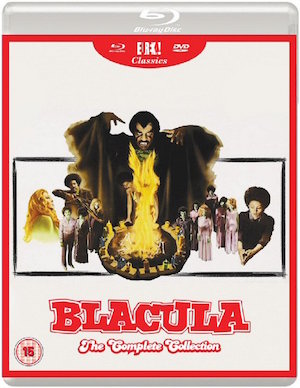 William Crain’s classic 1972 film Blacula gets a reissue thanks to the brilliant Eureka.

Over the past few months a number of big Hollywood box office hits have featured black actors such as Denzel Washington (The Equalizer) and Morgan Freeman (Lucy) in leading roles. It’s doubtful anyone would raise an eyebrow at that statement but rewind to the very start of the 1970s and this scenario would have been much more unusual.

Something extraordinary happened as that decade got underway and the phenomenon quickly dubbed blaxploitation played an integral part in giving black actors, producers, writers and directors a chance to prove their worth in popular movies such as Super Fly, Shaft and Foxy Brown.

Soon blax crossovers were in vogue, an early example being Blacula, directed in 1972 by William Crain. The film went on to become one of the highest grossing hits of the year in the States, so successful that it spawned a sequel, Scream, Blacula, Scream, that found its way into cinemas just ten months later.

Due to its jokey title, I’d previously assumed that Blacula was likely a comedy featuring Dracula’s soul brother, a badass blood sucka with the sharpest threads in town – and the sharpest fangs too – but while there is some humour in the film, this is far from being played for laughs, in fact, from the very first scene it becomes apparent that some social commentary will be accompanying the horror.

Blacula opens in the eighteenth century with African Prince Mamuwalde and his wife Luva (Vonetta McGee), travelling to Europe in order to campaign for the abolition of slavery, an intriguing idea suggested by the actor playing the title role of Blacula, William Marshall.

Seeking out the support of Dracula in his Transylvanian castle might though be a little hard to believe – I’m guessing the chances of an Eastern European Count holding much sway on the matter would have been minimal – but it does give the character of Mamuwalde some instant nobility, a trait that Dracula does not remotely possess. He tells his visitors bluntly that slavery has merit and its ending is unrealistic. 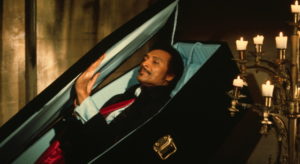 An argument on equality climaxes with a neat twist when Dracula metaphorically enslaves Mamuwalde; the Prince ending the evening sealed in a coffin, one of the undead and destined to become a slave to his monstrous desires.

Two centuries later, he rises from that coffin after being brought to America as part of a job lot by two gay antique furniture dealers who will become his first victims – and while the film strives to present a positive portrayal of African Americans, the treatment of homosexuals isn’t as enlightened.

Here on the streets of modern day LA, where the Afros are high and lapels and trouser bottoms are wide, Blac can just about fit in and actually looks rather debonair in his cape. He has a droll sense of humour too, “A bloody Mary” he answers in a club when asked what he’d like to drink and he’s charming too. Well, at least when his thirst for blood isn’t getting the better of him.

Soon he meets Tina Williams, a woman he believes to be the reincarnation of Luva (both roles are played by Vonetta McGee) who just happens to be a friend of one of Blacula’s victims and whose sister Michelle also just happens to be the girlfriend of Gordon Thomas (Thalmus Rasulala), an LAPD pathologist who is investigating the death and who is stunned to find that it is consistent with a killing in vampire folklore.

Is the film frightening?

Well, watching the first half or so of Blacula was about as scary as a ride on the ghost train at Blackpool’s Pleasure Beach but then one scene did give me a jolt although I won’t spoil it by going into details.

Despite its outlandish premise and almost comical coincidences, Blacula is well worth seeing for a number of reasons.

Marshall playing cinema’s first black vampire is truly memorable in the role with a great physical presence and booming baritone reminiscent of Hammer Horror’s vampire of choice at the time, Christopher Lee.

The movie is accompanied by a very good soul/funk soundtrack that features music by Gene Page and several songs at a local nightspot where The Hues Corporation appear to be the house band. The ending is unpredictable too, and poignant, and you certainly couldn’t really knock American International Pictures for wanting to revisit such a success.

Directed by Bob Kelljan, Scream, Blacula, Scream is arguably a finer film than its predecessor.

This time round Blac is resurrected courtesy of some ropey exposition set out early on when following the death of his Voodoo Queen mother, Willis (Richard Lawson), is spurned by his fellow cult members, who insist in installing his stepsister Lisa (Pam Grier) as their new leader.

Hellbent on revenge, Willis comes into possession of Mamuwalde’s old bones but his plan to raise him from the dead to help him achieve some payback backfires and, before the night is out, Blac is back in an LA and Willis has a pair of large bite marks on his neck.

Yes, some of the plot devices are again on the clunky side and to modern eyes the transformation of Blacula into a vampire bat might veer on the laughable but it was made over forty years ago and before the existence of CGI.

Once more, the movie’s good points though easily outweigh any negatives.

There’s some great acting talent sharing the screen with Marshall, especially Richard Lawson’s turn as the most irritating vampire ever and the Queen of Blaxploitation herself, Pam Grier – who Blacula finds himself attracted to and not just for her good looks.

While in the first film Blacula’s main aim was to reunite with his reincarnated wife, the sequel sees him determined to rid himself of his vampiric curse and he quickly realises that with her powers, Lisa might just be able to exorcise that curse.

The voodoo element helps ensure that this isn’t just some rehash of the original and the action sequences are much tighter too. The ending is, like Blacula, unexpected and imaginative, but the film somehow didn’t perform as well as expected which is a pity as I could have happily watched a third outing for Blacula.

Blacula – The Complete Collection is an absolute must for fans of blaxploitation as well as 1970s horror enthusiasts on the lookout for a fresh spin on the vampire genre but there’s something to enjoy for everyone here.

Extras include: Trailers for both films, a new and exclusive introduction to the films by Kim Newman and a 32-page booklet featuring new writing by Josiah Howard.