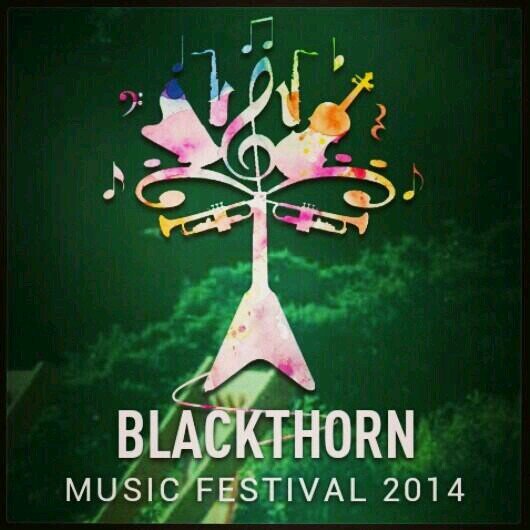 Yesterday we brought you a report from day one of Blackthorn Festival, the Stockport Festival which “seems to work as a microcosm of your traditional festival experience.” Here Dave Beech reports back from day two, which featured another wealth of local talent.

As Saturday rears its not-so-ugly head, we relish in the fact that our silver tongues have managed to alleviate us of today’s shift, and as such we can treat ourselves to an early tipple, something which, when we arrive on site a little after midday, it’s clear many other punters have partaken in as well. What’s also clear, is how many more people have descended on Blackthorn Farm than yesterday, though given the weekend’s line-up this of little surprise and is something organisers should bear in mind, should they want a more consistent attendance next year.

The first band we catch today are No Hot Ashes; young punk / funk upstarts who have taken both 2014, and the exposure the year has brought them, in their stride. Living up to the hype surrounding them, the band play a tight 30 minute set which features a new iteration of fan-favourite ‘Skeleton’, something which has been missing from their sets of late, whilst newer tracks such as ‘Goose’ and ‘Skank’ seemingly improve with every airing. It’s a shame their stage-time is as early as it is, as they’re a band who undoubtedly would have impressed even the most fragile audience members. Isaac Taylor is a frontman in his own right; his limitless energies make for a captivating watch, and one can only imagine the charisma he would exude given bigger stages and crowds. With a visit to Gavin Monaghan’s studio booked in for September, it’s clear No Hot Ashes are a band with a great work ethic, something mirrored in both their tireless gigging and fervent song-writing. Expect big things in the next year or so.

Taking a break in the music, we opt to grab a couple of beers and sit in the sun, taking full advantage of the breeze which seems non-existent underneath the stifling corrugated metal of the Main Stage’s roof. Next up, however, are Manchester’s The Slow Readers Club whose Editors-esque atmospheric post-punk can quite clearly be heard across the site causing us to rush back to the barn to bake indefinitely. And bake we do, but not without reason. This is the first time we’ve managed to catch The Slow Readers Club live, despite following them for over a year, and we’re not disappointed. Their ominous and emotionally-fraught song-writing might be a far cry from the beating sun and summer optimism upheld by the crowd, but it’s a solid set that makes it easy to see why they’re one of Manchester’s most sought-after acts and with tracks such as previous single ‘Forever In Your Debt’ going down as well as they do, it’s easy to see them being far more than just another cult Manc act.

Keeping things local (as smaller festivals like this should) next up are Manchester’s Maisetto whose blend of contemporary alternative rock and light pop-punk draw one of the biggest crowds yet. It’s nothing we’ve not heard before, mind you, quite literally in the case of the two covers the band drop in. Both of these do go down well with the younger crowd however, many of whom seem to be experiencing a festival for the first time. Fall Out Boy‘s ‘Sugar We’re Going Down’ is nailed almost to the point of it being indistinguishable from the original whilst Green Day’s ‘American Idiot’ feels somewhat anachronistic though; the political message ten years too late and lost on those young enough not to have heard the song countless times before. This shouldn’t detract from the set however, Maisetto are a young band with buckets of promise and a shrewd sense of how to play to a crowd and with some more experience behind them, their name could potentially go on to adorn the backs of the Kerrang! crowd everywhere.

Next up are the awfully-named yet awesome sounding Mohawk Radio. Channelling a time when rock music was actually exciting, a lesser band may well have come off sounding derivative, but thanks to a powerhouse vocal from Mia Page, Mohawk Radio actually well … rock. Usually I would cringe at the cliché behind that last clause, but hearing her belt out balls to the wall rock anthems before lapsing in to almost-ballad territory really is impressive. Page also brings a young girl on stage with her for a rousing rendition of ‘Highway to Hell’; the younger girl ballet dancing, the older, strutting her stuff.

Due to work commitments once again we have to wrap our night up early, and make the decision to catch one more band before heading home. Fortunately that one band is Manchester’s Puppet Rebellion, a band I’ve been lucky enough to see on plenty of occasions and have seen them go from strength to strength over the last 18 months or so. Opening with the eponymous ‘Chemical Friends’ from their debut EP, the band’s set is littered with almost both current EPs in their entirety. Newer tracks from a forthcoming release do make an appearance however; standing out above older songs, penultimate track ‘Tame Imposter’ goes down brilliantly whilst fan-favourite ‘The Greatest Lie Ever Told’ closes their set on a nostalgic note. And so too, for me anyway, it closes the festival. Heads could only get hazier, hangovers notably more severe, though safe in the knowledge I would have to spend the day in work tomorrow. I think I made the right decision.

Festivals like Blackthorn are becoming ever more apparent on the Festival Calendar, and whilst they might not be the same epicentres for drunken debauchery and drug-fuelled weekends of overindulgence, they are fantastic ideas that, for the most part, really are family friendly. Other smaller festivals might cater for a younger crowd a little more than Blackthorn did, but it’s because of that that the focus was really on the music, and the bands playing there. They play an integral part in raising the profile of smaller bands quite significantly, whilst also sparking an interest in music to a much younger crowd than the likes of Leeds Festival or Wireless cater for. And it’s for that reason that I think festivals such as this will only continue to see their popularity grow.