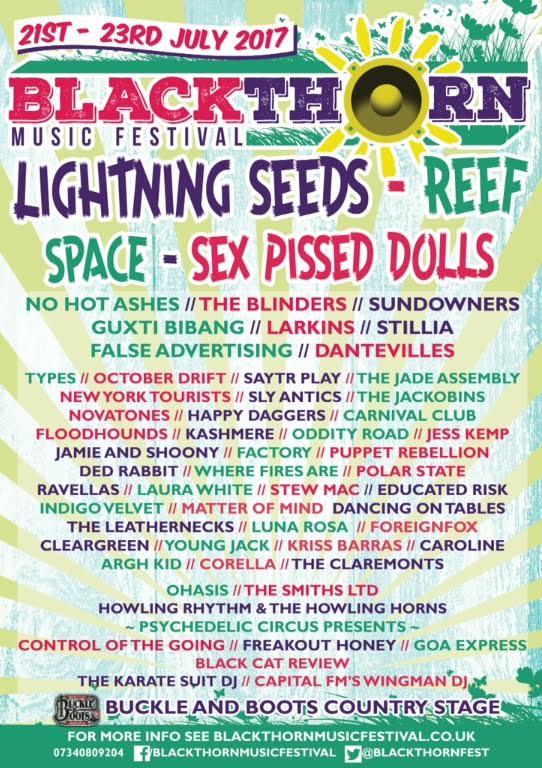 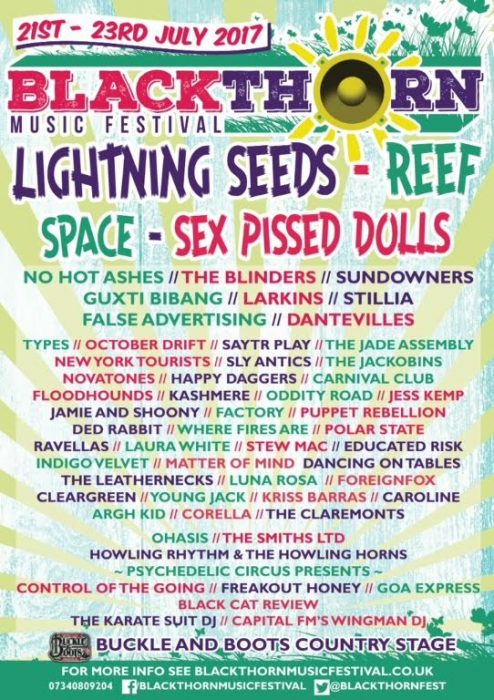 It barely seems a couple of months ago that we were last at Whitebottom Farm, basking in its rural idyll while drinking in the sound of some of the UK’s strongest unsigned bands. The fact remains though, that it was nearly a year ago. And while many people are gearing up for Glastonbury, our eyes our set firmly on one festival only. Blackthorn.

Situated in a Stockport suburb on the fringes of the Peak District, Blackthorn operates in a strange yet welcome bubble of its own. Managing to feel both boutique and DIY, it’s a festival that celebrates not just homegrown talent, but the local community as well.

Though this year’s line-up is arguably its strongest to date, we’ve just about managed to condense the line-up down to fourteen bands we think you should be checking out ahead of the festival on 21st – 23rd July.

Arguably a band who need no introduction, Glossop’s Larkins played a blinding set last year on the Paddock Stage. A lot can happen in a year though, just ask the band. Fresh from a sold out single launch at Manchester’s Gorilla in February, the band will return this year with more tracks, more riffs, and more hair!

Blackthorn favourites No Hot Ashes return once again to lay the funk on thick and heavy. Fast becoming a Manchester institution, the four-piece garner rave reviews almost every time they step on stage and if you’ve seen them live before, you know why. Absolutely not a set to miss this year.

TYPES made their live debut at Blackthorn last year, and have played only a handful of gigs since. While intense is a word that could easily be used to describe the band, bizarrely so, is ambient. Dealing heavily in atmosphere, TYPES’ are a band who thrive on ambiguity; their tracks, both rich and desolate, always open to interpretation. Expect big things.

October Drift seem to be on an ascent that no-one can slow down. Having just finished a European tour, the Sheffield/Taunton four-piece are set for a Summer full of festivals, with Blackthorn being no exception. Making their debut, you can expect what’s arguably going to be the most intense set of the weekend. Not one for the faint hearted but an absolute must see.

Following a calamitous set last year that kickstarted Sunday with multiple mosh-pits and a collapsed barrier, it was a no brainer to invite the Sale-based four-piece back for round two. Though fresh-faced in comparison to some of the line-up, you can guarantee that The Claremonts’ set is going to be nothing short of chaotic, in the best way possible.

How many bands can add Status Quo to their list of fans? New York Tourists can. Having kickstarted the year in top fashion with their most recent single ‘Feels So Good’, the band went on to tear Manchester’s Deaf Institute a new one with an explosive single launch. Catch these guys now for major bragging rights.

Back for the second time following a funk fuelled debut last year, Leeds’ Happy Daggers are a must see if you’re a fan of funk and soul. Expect serious grooves and aching legs the following morning because there aint no way you’re not dancing.

Hailing from Sheffield, Oddity Road are another band to make their Blackthorn debut this year. Managing to encapsulate the youthful energy of indie-pop and give it a somewhat darker, more mature twist, the four piece offer a quiet intelligence to their songwriting that’s not often seen in indie-pop.

All the way from Edinburgh, Indigo Velvet offer a hugely frenetic brand of tropical pop that’s sure to provide a taste of summer regardless of the weather. Built around calypso melodies and a huge pop sensibility, the band’s aesthetic is arguably one of the most upbeat of the weekend is sure to get anyone in attendance dancing.

Another band from Scotland making the trip Southwards, Dancing on Tables are less tropical but harbour an equally frothy pop sensibility. Expect vocal harmonies aplenty and the occasional sixties inspired groove from the Dunfermline five-piece.

Having already earned praise from Huw Stephens and Steve Lamacq, Liverpool’s Polar States bridge the gap between melody and intensity, effortlessly combining a radio-friendly indie vibe and a brooding post-punk aesthetic. The band make their debut at this year’s festival and aren’t one to be missed.

More of an institution in Manchester than a band, Puppet Rebellion should need little introduction. Appearing for the second time after taking a year out last year, the five-piece promise to provide a frenetic set that’s both atmospheric and uplifting.

Making a trip down the M56, Runcorn’s Factory take the funkiness of Madchester, combine it with rock ‘n’ roll attitude and give it a distinctly contemporary twist. Harbouring sleaze and swagger in equal measure, the four piece’s take on classic genres is both timely and timeless and is something you need to see after a pint or six.

With deep grooves and tongues in cheeks, Sly Antics embody a rock ‘n’ roll spirit without ever taking themselves too seriously. Falling somewhere between Maroon 5 and The Darkness the Manchester trio are firm favourites in the city thanks to their wry take on timeless genres. Sure to get you dancing and put a smile on your face.