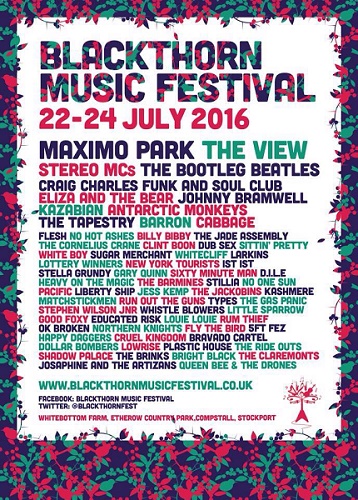 While most small festivals seem content in resting on their laurels, booking only small local acts year in and year out, Blackthorn Festival seems intent on annually outdoing itself. Tucked away in a sleepy Stockport suburb, the three day event borders on the boutique without any of the added pretence that goes with such a label and as a result, is a welcome and refreshing addition to anyone’s festival calendar.

This year the festival has expanded its reach and appeal once again, with organisers booking a plethora of acts across the three days. Genre-spanning cover bands make up Friday evening’s entertainment for the most part, while Saturday and Sunday will see the best bands from both across the region and further afield descend on Etherow Park in a celebration of the UK’s independent music scenes.

Food will of course be available from a variety of the region’s street food stalls, but we all know it’s the music (and the beer) that are the weekend’s real stars. Louder Than War have put together a list of 10 acts you should absolutely be checking out over the weekend.

A band who arguably need no introduction, Newcastle’s Maximo Park will close the festival on the Sunday night, with singer Paul Smith’s trademark mic swings and high kicks keeping punters entertained as they tear through a career-spanning set. Having caught the band just before Christmas, we know they’re not ones to miss.

Another band who shouldn’t need an introduction, are The View. Hailing from Dundee, the Scottish four-piece first appeared almost a decade ago, and have since released a slew of well received albums and embarked on numerous tours. Having not seen the band since the days of them wearing their jeans for longer than they should, we personally can’t wait for the Saturday night.

Self-proclaimed snot-poppers Flesh are a band that have been making waves almost constantly since their inception. Don’t let the name fool you, they’re far from the black metal band it suggests. Instead the band opt to peddle in a contemporary form of brit-pop, harbouring much more bite and swagger than the genre’s initial period could muster. A must see.

Another band who’ve made a name for themselves impressively fast are Manchester’s Cabbage. Having created their own brand of deliciously wonky, psych-influenced post-punk, the five-piece are one of the city’s breakthrough artists of the last twelve months and are one act that whose name you’ll be seeing a lot more over the coming months.

Given the current speed of this band’s ascension, it’s unsurprising that Stockport indie-funkers and Louder Than War favourites No Hot Ashes will once again return to the festival. With the first part of their year taken up with a slew of excellent support appearances, and a summer season packed full of festivals, you know they’re going to bring their A game.

Another Stockport band who manage to embody the spirit of rock’n’roll without ever feeling like a cliché are Kashmere. Though they’ve not even released a single yet, the band are already causing quite a stir on the city’s live scene. With their debut not far off, you know the buzz is only going to get louder. Catch them if you’re cool enough.

Easily one of the strongest bands in the North West at the moment, Bolton’s Jade Assembly will be bringing their idiosyncratic brand of indie rock back to Stockport. In tow will of course be the ever-present Jade Army, and of course the bags of indie rock attitude the band harbour themselves. Their set will prove a popular one, and if you don’t believe us, get down and check them out.

Another staple of Manchester’s current scene, is Salford’s Sixty Minute Man. A six piece indie band for whom melody is of equal importance to a cocksure swagger, the band recently supported Factory Records’ Space Monkeys at Gorilla, earning them more than a handful of new fans. With plenty of cross-over appeal, you can be sure of an diverse crowd all with one thing in common. Great taste in indie bands.

One of Manchester’s best kept secrets, Ist Ist are a post-punk outfit that occupy the darker recesses of the city’s scene. The band’s latest single White Swan prefaced a handful of received shows that culminated in a closing slot at the recent Dot to Dot Festival in Manchester. They’re not likely to remain a secret for much longer however, so catch a set that promises to be full of brooding melancholy before they blow up.

Another band for whom the big time seems inevitable, Manchester’s Larkins are a frenetic four-piece steeped in indie tradition, and harbouring more than their fair share of contemporary aesthetics. The band’s upbeat and bouncy indie-pop is sure to win them some new fans over the weekend, but those already in the know, will be looking forward to what promises to be one of the weekend’s many highlights.