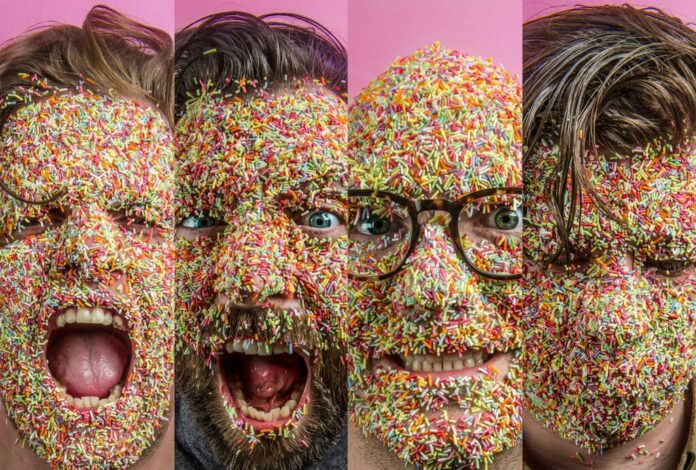 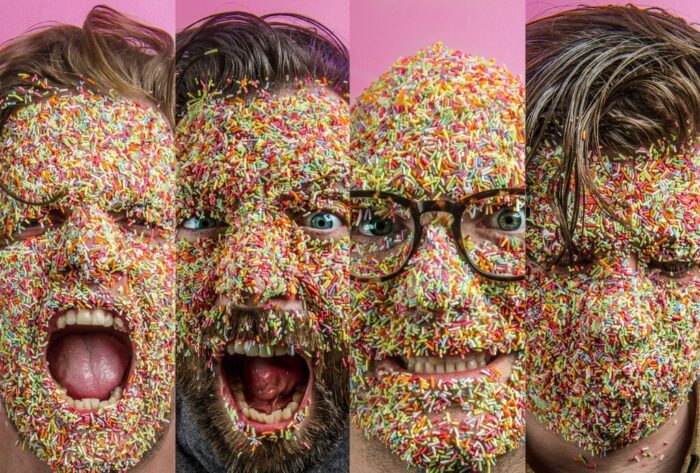 Blacklisters have a new album out very soon! On 18th September in fact, via Smalltown America. As a pre-curser to that we thought it’d be fun to find out a little more about the band’s influences. Their (perhaps not too surprising) choices (not that we’re complaining, every pick’s a winner in our book!) can be found below, after a bit of spiel about the band and a stream of their latest video, Shirts.

Leeds quartet Blacklisters, who number Pulled Apart By Horses amongst their nearest and dearest, have impressed Louder Than War from the first time we heard music by them. Their debut album, BLKLSTRS, was one of our favourite albums in 2012, and its release was met with no end of well deserved critical acclaim.

The band, Billy Mason Wood (vocals), Dan Beesley (guitar), Owen Griffiths (bass) and Alistair Stobbart (drums) have earned a reputation as an explosive live act through their aggressive, confrontational performances riddled with dark humour, and a cursory (or even lengthy) listen to any of their music will make you realise that the comparisons people  draw between them and the likes of The Jesus Lizard and Pissed Jeans are absolutely bob on.

Before we jump in with the band’s influences it seems only fair to get the ball rolling with the latest video by Blacklisters themselves. It was created by Pulled Apart By Horses members Tommy Davidson and Tom Hudson aka Snake Eyes and the band’s frontman Billy Mason-Wood has these wise words to say about the subject matter of the song:

“This song, Shirts, is a song about shirts, about wearing them, about needing them, about loving them. I didn’t wear a shirt once and this is what my world looked like. Always wear at least one shirt.”

These are probably by and large a good shout as to who our whole band is influenced by. But all the other music that we listen to has played its part. Whether it be bands like Liars or Battles or country and blues or the inordinate amount of Hip Hop that our drummer, Alistair, listens too, the net is cast wide. You shouldn’t just stop at the end of your genre, but if I am to, then these would probably be them:

I think I’d say more than any other band we probably say the words “you know, like Kong” more than any other band when it comes to writing songs. We were lucky enough to share a label with them and tour with them and can still call them our friends. But even now I am still a massive fan boy, I think ‘Snake Magnet’ is the best album I have ever heard and that Kong, at their pomp, were the best live band I’ve ever seen. All hail Magpie, Lulu and Krem, gone before your time.

There was a time when we first started writing noise rock that every idea we would throw out there would be sound like ‘My Black Ass’. 1000 Hurts, At Action Park and Terraform are must own albums for anyone who even slightly likes music, let alone those who like noise rock. This band opened doors to all of the other bands who make this kind of music, whether it be Rapeman, U.S Maple….

My Black Ass by Shellac…

Yep it will come as no surprise that this band are instrumental in our sound. The dynamic between bass and drums and guitar and vocals is the dynamic that we looked to when we were forming what we wanted to sound like. We don’t take as much from them as you’d think, at least not these days, but they are a fucking amazing foundation that there is no getting away from. They are too good.

Mouth Breather by The Jesus Lizard….

For the others more than me, although I do love them. The Melvins are a phenomenal band, they have literally done everything, made whatever music they’ve wanted, changed whenever it has suited them and in general done whatever they’ve wanted. I didn’t get them until I saw them live and the moment I did, I regretted all those years I denied their brilliance.

Night Goat by The Melvins…

I’d say that this isn’t a musical influence but for my money no band has had a bigger impact in terms of introducing us to the diverse music scene in Leeds. Through them we met Brew Records, we met Kong, we met These Monsters, we met Pulled Apart by Horses, we met That Fucking Tank etc etc and it changed the outcome of what, to be honest, was a pretty useless bunch of 20 somethings who had no idea what they were doing, still don’t really. And ‘I Hate This Do You Like It?’ is a fucking killer song

‘I Hate This Do You Like It?’ by Chickenhawk…

Before The Jesus Lizard, before Shellac, there was Devo and they wrote brilliant songs, we wanted to be like Devo more than any other band, we failed to be like them, we will never forgive ourselves.

Another band that brought us together. Gang Of Four were a gateway band getting us discord and dissonance, a groove and a strong rhythm section. This band had it, and for me no more so than in ‘Anthrax’, that song is what all songs should be.

Anthrax by Gang Of Four…

I remember stumbling upon the single ‘I Don’t Need Smoke To Make Myself Disappear’ and thinking I had discovered to the key to all music. I bought everything they had made up to that point and threw it at the band. There way of writing  both incredibly direct verse chorus verse, weird and interesting and laugh out loud funny songs sometime all at the same time is a game changer.

These guys like Shellac and the Jesus lizard were pivotal at the start, when we stumbled on Noise Rock and Post Punk we couldn’t get enough, we ate it all. When we want to write a direct straight to the point song we look no further; angular, abrasive, disco drums.

With this last album we listened to a lot of Daughters. In particular Daughters by Daughters. it is an incredible album. With our first album we had taken influence from a lot of the same places. But when it came to the second we had learned a lot, listened to a lot more bands and bands like daughters, Young Widows and Big ’n brought a lot to the table. Daughters are amazing . Get them in you.

The Virgin by Big Black…

Pre-order the new album ‘Adult’ on LP / CD (with an INSTANT download of the album) here: independentmusic.com/products/555690-blacklisters-adult