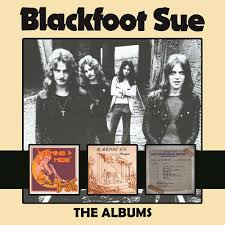 The recorded works of 1970s Birmingham Glam/Hard Rock Band Blackfoot who scored a top ten UK hit in 1972 with “Standing In The Road”….LTW’s Ian Canty looks at Brum’s answer to Slade……..

Make no mistake by the start of 1972 Slade were a, or perhaps even the, big noise in the UK. They already had scored their first number one and would go on to dominate the British charts with their no-frills, hook-laden, street level Rock ‘n’ Roll. So as a result the A&R people up and down the country began the inevitable search for similar outfits that could meld hard-hitting sounds to winning tunes in the same way as Noddy and the lads.

Blackfoot Sue (who should not be mixed up with the similarly monikered Lynyrd Skynyrd spin-off band Blackfoot) seemed to fit the bill to a tee, but were originally passed over by United Artists. However they did manage to attract the attentions of Noel Walker, an in-house producer at the label, who would become their manager. The Birmingham outfit were at the time working under the name of the Gift (there’s a Weller-tastic coincidence with this band that is too delightful to pass up – Blackfoot Sue beginning life as the Gift and then being signed to the DJM Records off-shoot JAM records!). Forming way back in the 60s around the Farmer brothers Dave and Tom originally as the Virus, the line up was completed by guitarists Eddie Golga and Alan Jones. Prior to their change of name they had featured in the BBC film “What Kind Of Life” playing the song “Celestial Path” (which would eventually end up as the flipside to their hit single).

They were far from just a copy of Slade though; Blackfoot Sue could definitely rock and while for expedience sake they could effect the fashionable Glam trend, they also had some winning melodies and different tinges to their sound. In Tom Farmer had a singer, that admittedly didn’t have the one-off Holder holler, but could sing both harmonic vocals and a raw Blues Steve Marriott rasp if required. Blackfoot Sue were also fond of “Magic Bus” style percussion interludes which also chimed in with the Glam stomping punch and coupled that with a typical Brum no-nonsense tough Rock attitude. They made an immediate impact: their first single “Standing In The Road” had echo drums, a rolling piano and the kind of hook-line Slade would have been proud of, all of which meant of a big Top Ten hit for the band. The follow up “Sing Don’t Speak” is probably the band at their most “Glam”, with an exotic drum beat that even threatens to turn into “Gary Gilmore’s Eyes” at times!

Though obviously pleased with the level of success achieved with their first two singles, they were not that enamoured with the “Teen Scream Scene” or Glam so sought to re-position themselves more as an “album act”. With their debut album “Nothing To Hide” for the most part they succeeded. The truth was they were far more a rock solid Rock group in the mode of the Faces or Stones than some Pop minstrels anyway. They came to the scene fully formed, which meant that unlike some “Glam” outfits, their debut album consisted entirely of original compositions with no recourse to Glammed-up 50s Rock ‘N’ Roll cover versions. Also, such was their faith in their own material, when it came to issuing their first LP they left all of the singles off. Unfortunately this may have contributed to the album not reaching the charts, but on the other hand it was value for money for the more hardcore fans who were rewarded with a varied and promising effort (Happily on this reissue you do get all the a and b sides of those early singles and very good they are too).

The album itself is fine display of hard rock with many little quirks and eccentricities which may have resulted in Blackfoot Sue never going onto be mainstream Pop stars but also means plenty of variety to keep one hooked. There’s the hint of the “Psycho Killer” riff in their kiss-off to the movement they were briefly drawn into (probably against their own wishes) “Glitter Obituary” which has a little of the same spirit as the Stones 70s and early Queen. Pride of place goes to “”The Spirit Of 69”: Blackfoot Sue were never too proud not to delve back into a bit of Psych here and there and this one does “quiet/loud” decades before Nirvana. Ok there is a little bit of “Stairway To heaven” in there without doubt but it’s a novel take on that kind of thing with some great harmony vocals and pile-driving guitar menace.

Though the failure of “Nothing To Hide” to chart was obviously a bit of a setback for Blackfoot Sue, they pressed forward and recorded the follow-up album (or “sophomore” album if you will) “Strangers”. Taking up most of the second side was their version of Tchaikovsky’s 1812 Overture with the truncated title “1812”, a grandstanding high-spot of their live shows but perhaps testing at 11 minutes here. Away from that track “Strangers” was a very good second album and it is a head scratcher as to why it was never released at the time. By this time Blackfoot Sue had honed their Soulful and Funky Rock to perfection. Fast paced farewell to their hometown “Bye Bye Birmingham” was a natural single but somehow missed the chart as did the bonus track “You Need Love”, despite being a Proto-Metal/Soul dazzler.

Near title track “Shoot All Strangers” manages to work Gospel vocals into a Funky Faces/Kinks work out and there is hints of Thin Lizzy’s swagger on “Care To Believe”. Missing is one track that eventually came out as part of the LP in 1977 (only issued in the US as well) “Tobago Rose”; this was seen as a studio experiment by their manager and not a Blackfoot Sue track, so the band members understandably didn’t want it on this box set of the band’s work. Even without this makeweight “Strangers” is a good record and one that shouldn’t have been maligned and cursed to such a limited, after the fact, release. Unfortunately on that score, worse was yet to come.

Although 1975’s “Gun Running” was never released, it was a logical follow up with a whole bunch of fresh-sounding Rock ‘N’ Roll vigour. With “Strangers” only gaining a limited release three years after the fact, it is not surprising it remained unissued at the time, but that is no reflection on the contents. They used the harpsichord perhaps a little too much on this album (extensively on “Wanted Gun” and “Pick Me Up Put Me Down”), but it was an interesting innovation for a Hard Rock act. By this stage their snub-nosed riffs could have been seen as a forerunner as the type of Street Rock Eddie and the Hot Rods and even the mighty Only Ones would perfect (albeit with not quite the songwriting skills of a Peter Perrett).

After Blackfoot Sue folded in 1977 the Farmers and Eddie Golga decided on a swift change of direction was called for, hence their new Soul/Dance band Liner, who received with a decent level of success with a couple of near hits in the late 70s. Then came a “New Wave” outfit called Spoilers (two singles for MCA). Later still, into the 80s, the three tried once more with the more generic Pop/Rock band Outside Edge (who recorded extensively for the Virgin Records spin-off label 10). You can’t say they weren’t triers!

In summary Blackfoot Sue were a fine Hard Rock band with a knack for a catchy tune and a yen to do something a little different – it is a shame that they probably more suffered than benefited from the early hits, people (and management) may have expected the chart records to keep coming but they did not want to play that game. BS saw themselves in a more creative way than just a Pop jukebox and the evidence here proves they were right in their approach. They were a consistently good Hard Rock/Blues/Proto Metal band and perhaps could have attained a level not far short of the wonderful Faces – they certainly had all the tools at their disposal and this boxset is well worth hearing.