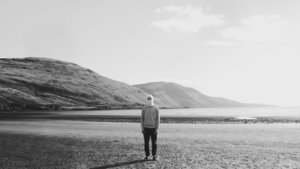 Ioan Humphreys has a listen to a brand new release from Black Fly, the Vermont electronica artist working from a rural haven. He finds heaps of potential in a track that may benefit from being longer.

Black Fly  is no stranger to this writer as I had the privilege to review his last release here. Black Fly is an artist who records from his bedroom in the backwoods of Vermont, surrounded by a vast area of woodland scattered across mountains covered in snow. Dipped follows debut single I Don’t Know and is again mixed by David Tolomei (Beach House, Future Islands, Dirty Projectors).

The track starts with subtle keys that lead into an insistent throbbing electronica beat. The laid back and barely audible vocals come in with the refrain of “I take two steps back”. Black Fly sounds drunk whenever he sings. I like that!

There is a pause to proceedings that lead into the final third of the track. It’s only then that it becomes a truely danceable track that is suddenly over before you know it! I think it could last at least three times longer and be a substantial dance floor filler in its own right. Add remixes to that, and Black Fly has found his niche. Potentially great stuff.

Black Fly can be found on his Soundcloud.