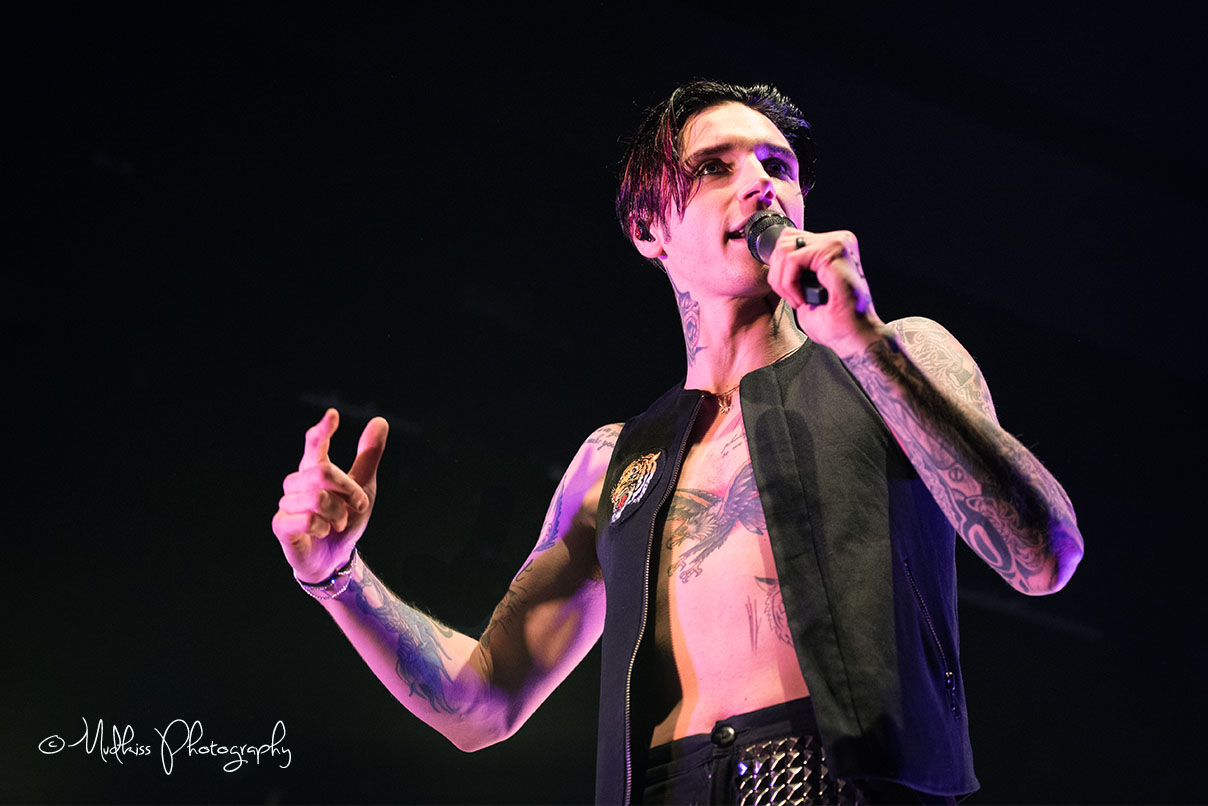 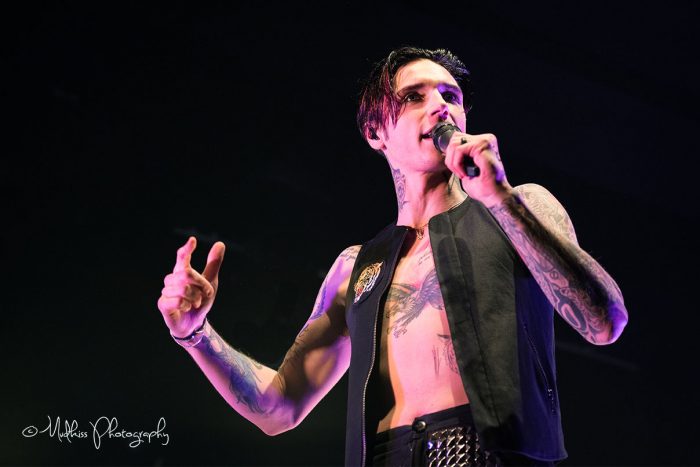 With new music and a new sense of vigour Black Veil Brides and Asking Alexandria announced a shared headline tour at the end of last year. The Resurrection Tour arrived in the UK for a brisk four date run and Louder Than War’s Melanie Smith (photographer) and Katie Clare (reviewer) went along to check out these two heavyweights of the heavy music scene’s 2018 revival at their sold-out Manchester date.

The Black Veil Brides and Asking Alexandria co-headline Resurrection Tour was announced along with details of new albums from both bands and was certainly met with excitement. The tour would give fans an early opportunity to enjoy some of the new material live and catch two well-regarded bands in one show. Manchester Academy date sold-out: fans creating a flurry on social media with ticket requests. With such large fan bases, The Resurrection Tour could have filled the Manchester O2 Apollo at least. 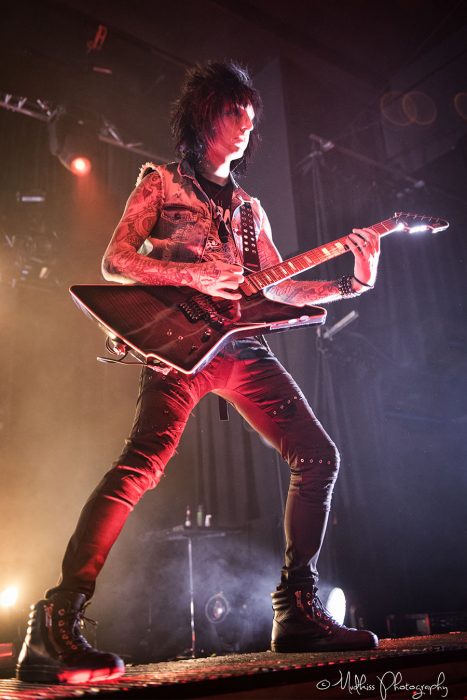 The Black Veil Brides have undertaken many artistic changes both stylistically and musically: from mere tweaks to significant shifts over the past twelve years. Vale, the band’s fifth studio albums has come three years after their eponymous fourth long-player. Vale is an affable even catchy affair that see’s the Black Veil Brides providing their most accessible release to date.

After a protracted stage change the electricity in the air has reached and passed maximum momentum by the time the Black Veil Brides take to the stage and not until the opening track Faithless and Coffin have resuscitated the audience is the energy rev’s up again.

We are three tracks in before we get our first dip into Vale with, Wake Up. Like much of the album, Wake Up has all those quintessential rock ingredients riff-heavy guitar solos and anthemic chorus which has the audience bouncing with arms in the air, singing in unison and grinning while they do so. The power of enjoyment being experienced is unquestionably the most significant way to assess BVB’s music, than valuing it by any critics thoughts.

Andy Biersack explains that there are some issues with the sound the band are hearing through their earpieces, however, thanks to the audience singing at such volume they are able to remain guided. It is a testament to Ashley Purdy, Jinxx, Jake Pitts, CC Coma and of course Biersack’s musicianship that had they not told us there was an issue no one would have guessed. Rebel Love Song is a rollercoaster with no drop it builds and builds the audience bouncing along with all their might until there is no-where to go the song concluding with deafening cheers. 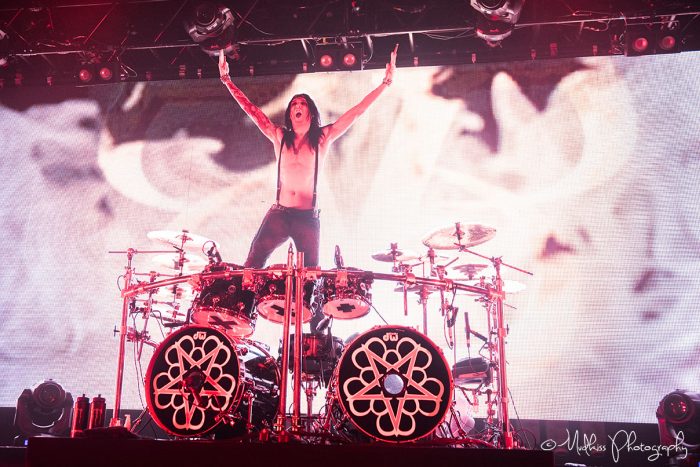 A personal favourite from Vale: When They Call My Name is included in the set. It is a track that would be easy to poke holes in, if we are being honest like most of BVB’s catalogue, it is somewhat derivative and the lyrics are as clichéd as they come. However, the combination of Biersack’s endearing near flawless emotive vocals blended with a poignant melody and stunningly executed guitar riffs: I’m 100% buying into it. Looking around Manchester’s Academy it is easy to see I’m certainly not the only one.

Plunging into their back catalogue BVB hurtle energetically through Lost It All, The Legacy, Wretched and Divine, Knives and Pens and with the venue’s curfew only minutes away; the audience are chanting for more before the band have managed to even temporarily leave the stage. It seems like techs have a final go at correcting whatever the issue is or was with the equipment which makes the wait seem to go on longer than it should. Just as there are murmurs that it’s nearly 11 pm – the stage lights go up and the band are back. 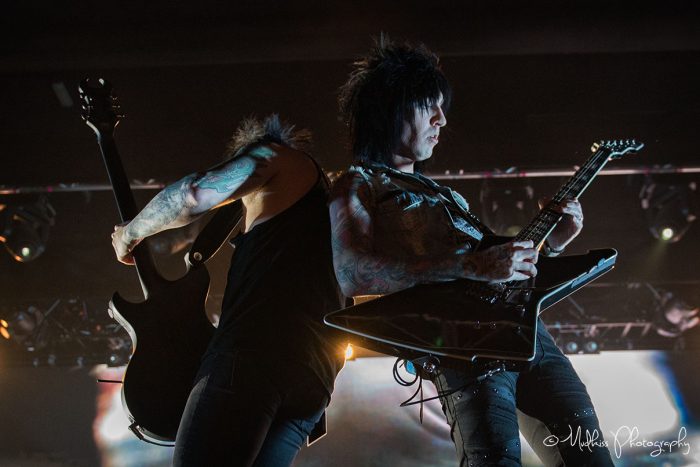 Treated to an unexpected three-track encore, Perfect Weapon sounding much fresher than expected and the crowd understanding we’re enjoying extra time throw all cares aside springing up and down in harmony for Fallen Angels and In the End. Screaming and cheering till the band had waved their last goodbye and left the stage. It is the combination of the band’s dynamism and dexterity along with their vibrant style and thrilling performance (ok yes maybe that imitative facet too) that together makes BVB so bloody enjoyable.