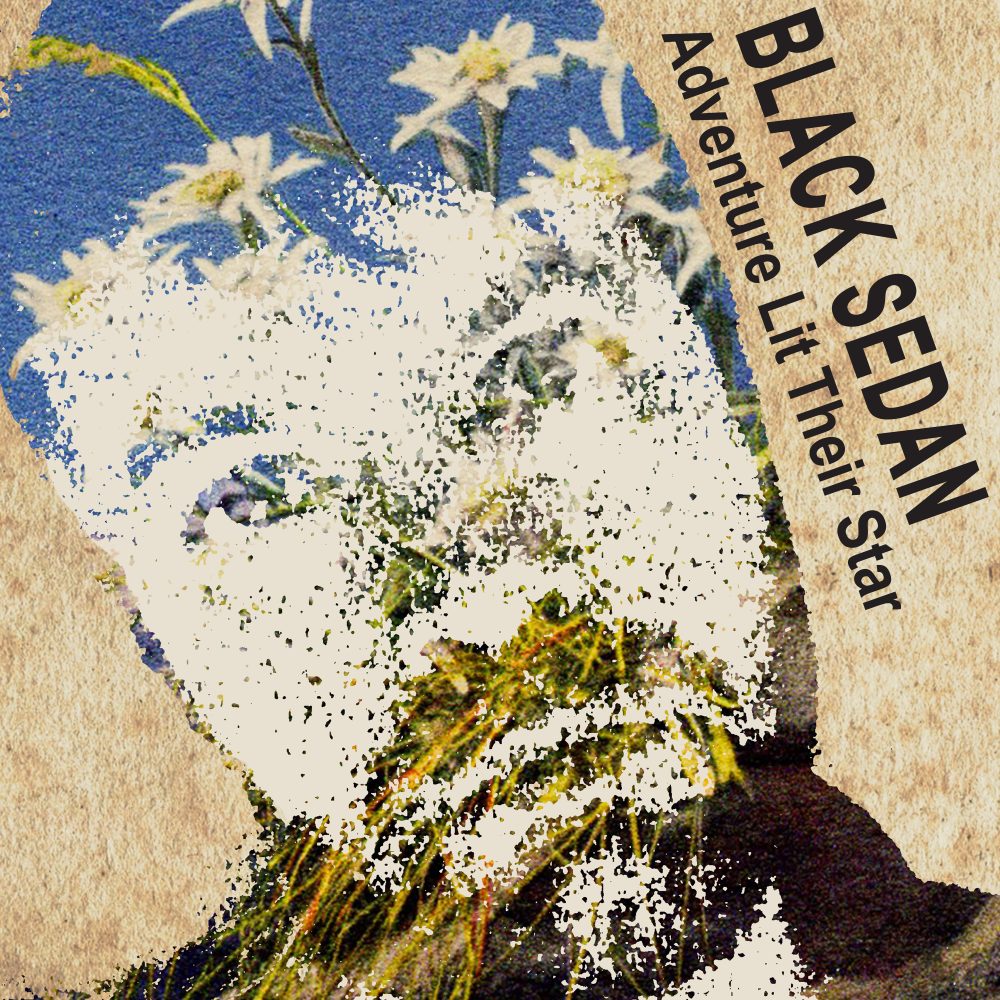 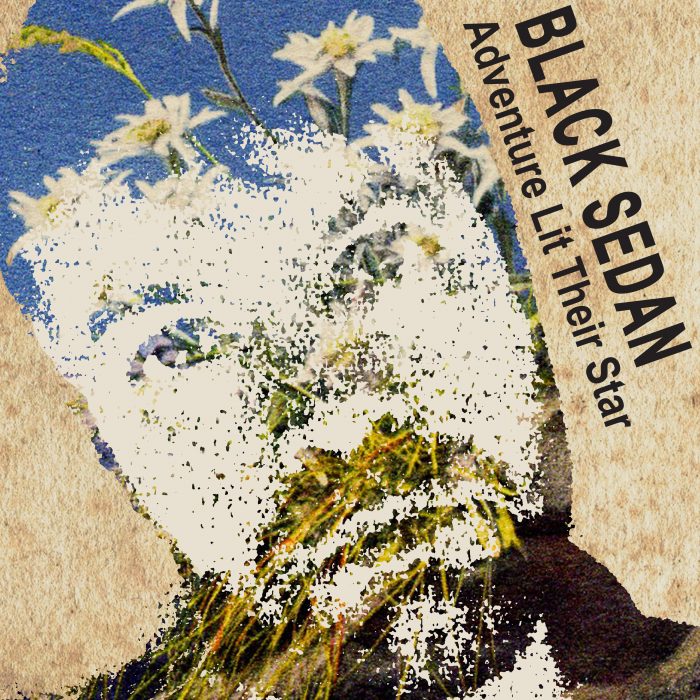 Black Sedan is a collective of musicians rallied by the journalist/author/publisher, Mark Hodkinson. Mark was previously at the helm of Black September who released some superb music back in the early 00’s.

Mark began the project two years ago. He explains the name. ‘‘When I was growing up, there was a record shop in town [Rochdale, to where his family had moved from nearby Manchester] called Black Sedan. I often got close to the door, smelling the patchouli oil and hearing all these great sounds, but was too intimidated to actually go in. By the time I’d plucked up the courage, it had closed down.’’

The album, Adventure Lit Their Star, is furiously varied with no less than five vocalists and upwards of 30 contributing musicians. In its down tempo, cut-up moments it has been said to evoke Boards of Canada, The Avalanches, UNKLE, The Sound Defects, Tommy Guerrero or Christopher Goze but when it’s upfront and at-you, it’s as simple and direct as power pop maestros Nada Surf, Material Issue, Army Navy, Oh Sees or The Shout Out Louds. And, of course, there’s always Hawkwind – Black Sedan cover Robert Calvert’s The Right Stuff, and This Is Your Captain Speaking: Your Captain Is Alive is, near enough, a tribute to space rock’s finest.

‘‘Almost always, you can tell what an album is going to sound like after the first two or three tracks,’’ says Mark . ‘‘I think a record should be eclectic and challenging, every song taking you somewhere else. I am a huge music fan with thousands of records and two iPods full of music. I’ve tried to bring a bit of absolutely everything to the record.’’

The opening number is Love on Love featuring lengthy samples from Charlie Chaplin’s famous speech in the film, The Great Dictator. ‘‘I saw the film about

10 years ago and became obsessed with the power and prescience of the speech. Since then, I’ve tried numerous ways to make it work properly as a song. At one point I set it against David Bowie’s Be My Wife but his management wanted a huge portion of the publishing, so I had to start all over again,’’ he says.

The new version, produced by the highly respected Sean McGhee (Alanis Morissette, Sugababes etc) has a chorus ‘borrowed’ from Nada Surf’s Blonde on Blonde. ‘‘I’ve had permission from Chaplin’s estate and Nada Surf, and, with Sean’s invaluable input, I think we’ve now framed perfectly the message within a haunting three-minute pop song.’’

Singer on Love on Love and four more tracks is Kellie While, better known in folk circles for her work with Thea Gilmore, Richard Thompson, Fairport Convention, Martin Simpson and the out-there, Reel and Soul Association.

The other main vocalist is John Matthews, frontman with the newly-re-formed Manchester band, The High. ‘‘Kellie is a great singer,’’ says Mark ‘‘She’s not as steeped in the indie shtick as I am, so she takes the songs off somewhere completely unexpected. I’ve loved John’s singing for years and years, right back to when he played in a local [to Manchester] band called Turning Blue. His voice is unusually vulnerable and as honest as he is.’’

Other major players on the record include Geoff Read, Miles Moss, Christian Brett and Terry Eves. ‘‘Everyone brought with them their own style of playing or interpretation of what I asked of them, and then trusted me to shape it into a great big slab of lovely, thought-provoking music,’’ says Mark. ‘‘I’ve been told the album is a ‘hard sell’ which is disappointing because originality should be coveted and then supported, not considered a fearful challenge.’’

After the album is released Mark faces a busy 2018. His new novel, That Summer Feeling, is published in August.

Can you tell us a bit of your background?

I was born in North Manchester to a typical working-class family. Brought up to be pragmatic, decent and hard grafting. I’ve worked as a musician and journalist/writer all my life. My novel, The Last Mad Surge of Youth, contains autobiographical elements drawing on my experience in music.

Elvis Presley. My dad played his music almost every day when I was growing up.

I suppose the D-I-Y ethos of punk rock and the experimentation of earlier bands such as Hawkwind. Anything goes, that be the mantra!

What instrument did you first pick up?

Guitar. I loved how they looked and then the electrified noise they made when plugged into amps, via echo units, fuzz boxes etc. I was as happy playing with the amp controls as I was strumming the guitar.

When did you first start writing music and why?

I started writing ‘songs’ long before I could actually play. It seemed perfectly natural. I’m always surprised that people who can play instruments well don’t write. I recorded an album (on cassette) within about a month of buying my first guitar – it was all noises and banging but I liked it.

Were you in bands before Black Sedan?

I was in a group called Untermensch at the age of about 15. We were political and punk. After hearing The Smiths and The Chameleons we morphed into The Monkey Run and played with the likes of The Stone Roses, The Wedding Present and, appropriately, The Chameleons – Dave Fielding produced our single, Falling Upstairs. We released two singles, an EP and recorded a Radio One session. After The Monkey Run I joined a group based in Hebden Bridge called The Last Peach.  We were Melody Maker’s tip for 1993 along with Suede and Pulp (who we supported). We recorded two brilliant EPs, Jarvis and String-Like.

Can you explain how black September formed?

I didn’t want the hassle of being in a ‘proper’ band anymore, having to book rehearsal time, hustle for gigs etc, so I just called on mates and asked them to contribute to songs I was working on.

Black September recorded a stunning album with John Matthews, lead singer of The High. How did you unite with John? At the time of the album John hadn’t been heard of since the early 90’s.

I was aware of John from way back. I worked as a journalist at the Oldham Evening Chronicle in the late-1980s and did the paper’s pop page. My timing was exemplary – the town had lots of great bands breaking through. My favourite, by some distance, was John’s group, Turning Blue. I loved John’s voice immediately and how he performed, standing rigid and putting so much into every line. I tracked John down for Black September and he was happy to help out. He has since become one of my best friends. He’s not like most singers; he’s almost completely without ego.

We’re you a fan of The High?

A massive fan. Somewhere Soon is one of my favourite albums of all time. And that means a lot said by a music obsessive such as myself, where I have thousands of albums and seek out new music constantly.

You’ve now released your latest album. How did this come about?

I’d had enough really after the almost nil response to the last album. And then I heard Charlie Chaplin’s incredibly speech in The Great Dictator. I spent years trying to best frame it within a pop format and finally felt I’d achieved this last year. I realised it would be a good excuse to bundle it with other tracks I’ve been working on and so the project became an album, Adventure Lit Their Star.  I’ve changed the ‘band’ name to Black Sedan.

Can you run through some of the songs of the new album and their influences?

It’s an absolute mish mash of everything I like: the power pop of Nada Surf; electronica of Fragile State or Bonobo; the  new wave angst of The Cure – I’ve tried to meld the lot together and I’m really pleased with the results. I know, whatever the critical response, I’ll be able to put the CD down in front of anyone, even 20 years from now, and know I wouldn’t change a note or beat or lyric. It’s absolutely what I wanted it to be, down to the typefaces used on the sleeve.

Will you be going out on tour in support of the album?

Nah, I’m through with touring. I was never particularly enamoured with it, the first time around.

What do you hope to do next?

I’d be happy to sell enough albums so that it makes sense to do another. I’ve already got about five tracks written. I can’t help myself!

You can find more details regarding Black Sedan at their own website.