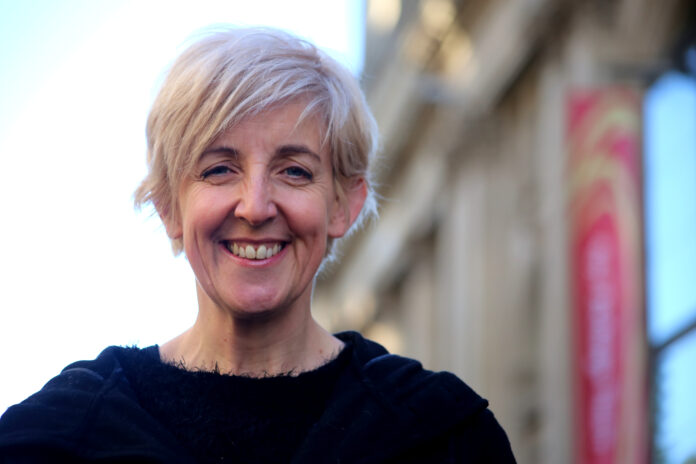 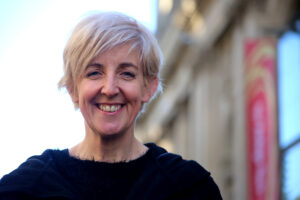 The small darkened theatre, seats full. The stage an armchair in the middle of the stage stood on a rug, edged by a path of faux grass.

The “park noises” of birds singing and gentle wind brought us into the quiet scene of Sylvia (Julie Hesmondhalgh) and Sophie (Rachel Austin) walking into the space.

Sylvia took the armchair, cradling her mug of tea; and in a calm and almost matter-of-fact way, cheerfully told how Sophie was growing up as a child. Sophie’s character then chipped in, in beautiful poetry telling of her way she looked at the world through the eyes of a young, independent, loved child. Explaining how she grew and changed, and developed a relationship with Rob, how they lived together; and onto the horrific description of how Sophie met her death.

The amazing honesty in the spoken words between the two made us feel like we were being let into their private mother/daughter relationship.

In a mixture of breath-taking poetry and heart wrenching honesty many of the onlookers were moved to tears; you only had to know any teenager, remember your own feelings at that age, have a friend that’s a bit “out there” or even to just be able to listen – to understand the story. The “story” that really happened.

Both Julie and Rachel’s performances were outstanding, made me tingle, and sob … Couldn’t’ve been performed better in fact. The rant/poem in the middle of the piece by “Sophie” was hair-on-the-back-of-ye-neck-standing-up stuff.

Julie’s natural and truthful acting didn’t seem like acting at all.. I guess that’s the best nod to her skill I could give, she was Sylvia for 50 minutes, and her tears were as real as mine and the people clutching their tissues on the way out.

This play SHOULD be seen by everyone that can, I came home and hugged my teenagers a little tighter, how special and unique these people are.

Have we said the wrong word?
Have we made the wrong turn?
Have we strayed from the path?
Have we stepped on their patch?

Do they find offence
at the studs in my lips,
or the rings in my ear?
Are they morally outraged by what we wear?

We are kindly creatures, peaceful souls,
but something of our life aggravates theirs,
something in their lives despises ours.

The difference between us is what they can’t stand.

So the blows fly in
with that level of fury
which needs to hurt
that depth of anger
which goes for the face,
which desires to maim,
and when they have finished
knocking the stuffing
out of my man,
kicking his skull
for all they are worth
and I nurse his broken head on my knee,

one turns on me.

Oh God he comes back and turns on me,
a plague of fists or a swarm of feet,
the boot going in again and again.

doesn’t know me from Adam,
not even my name,
but detests every atom
of what I am.

Nothing I scream for can make it end.