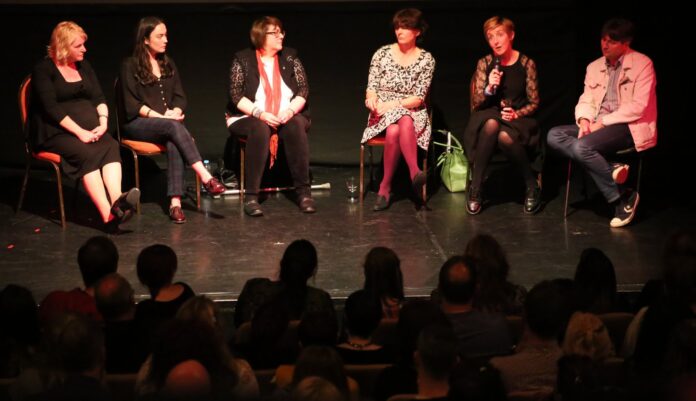 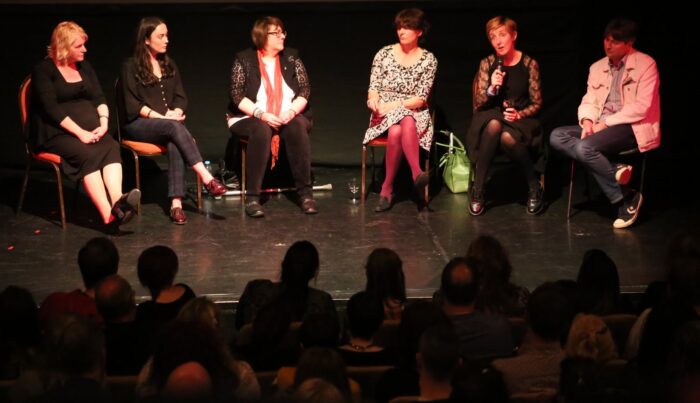 In case there are people who don’t know the back story to this film it goes like this: in 2007 Sophie Lancaster, a 20-year-old ‘goth’, was attacked and killed in a Lancashire park by a gang of feral youths. Poet Simon Armitage wrote a long prose-poem titled ‘Black Roses’ about the incident which was further devoloped first into a book, then a play for radio followed by stage and now into a film. The latter had it’s premiere at The Dancehouse Theatre in Manchester last night, from where Elspeth Moore reports back with both words and pictures.

The evening was a sell-out … and we came from all walks of life and with varying degrees of age, wisdom and naivety to watch it. Many of the people had heard the play on the radio or seen the stage performance but we were still grabbed by the heart at this outstanding piece of film theatre.

Having seen the play myself in the Royal Exchange, Manchester, I was almost expecting the film to be not as good, but oh no, it was as powerful and stunning as it was on stage.

The film is a two person story of the life and death of Sophie Lancaster. Sylvia Lancaster, Sophie’s mother, was played honestly in spoken documentary form by Julie Hesmondhalgh and Sophie was performed by Rachel Austin. The words were by Simon Armitage, taken from Sylvia’s own recount of Sophie’s birth, life and death. 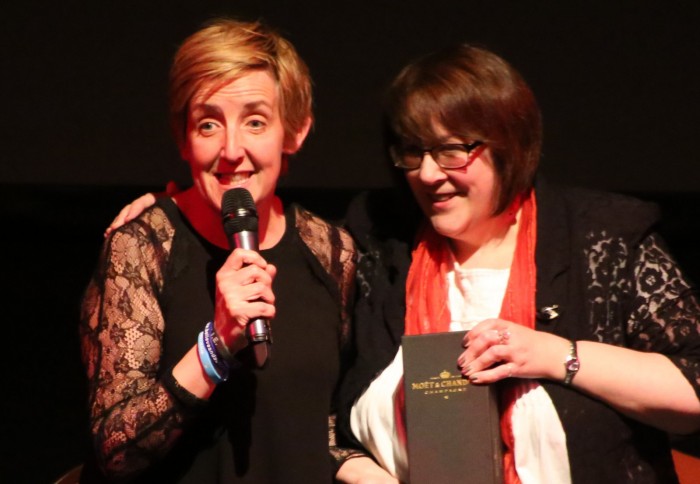 The film and play were produced by Susan Roberts and it hauntingly took Sophie through hillsides, streets, waste grounds and city nightlife, her words spoken in rhyme and with a rhythm that flowed; it took you on her journey and as a viewer you felt you knew Sophie.

Julie (Sylvia) sat hands clenched and wringing as she spoke to us. We listened as she told us of her beloved daughter and about how completely delightful, stubborn, creative and kind she was. She occasionally stopped for a sip of tea, or to rub her face as though she was washing it. When she cried, we all cried.

This film is more than a story of the murder of a beautiful young woman – it’s powerful and shameful and it has a lesson for us all to learn.

The Q&A that followed the film was with Sylvia, Rachel, Kate, Susan, Julie and Simon.

The questions were varied and often brought tears. The final word came from Susan. It was to thank the BBC executive Katy Jones, whose tireless support was amazing. Katy sadly died a couple of weeks ago.

The least said about the raffle the better haha.

It’s a film that should be seen by everyone.

All words and photos © Elspeth Moore. More photos by Elspeth on Louder Than War can be found at her author’s archive, whereas her personal website for more great photos is here.