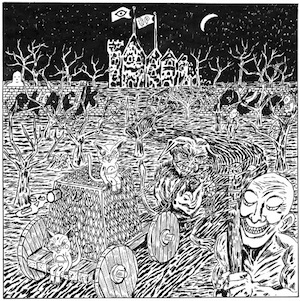 It had to happen right? With names like that? Thrill Jockey label-mates and kindred spirits Black Pus and Oozing Wound have joined forces for a limited vinyl-only split LP release featuring brand new tracks from each! The split LP is presented as a double A-side pressed on virgin vinyl with free download card and cover art from both Brian Chippendale and Sam Nigrosh (Oozing Wound’s visual companion) and will be released on the 16th June 2014.

Louder Than War are fans of both artists; Black Pus’ ‘All My Relations’ album was included in the LTW Top 50 Albums of 2013, whilst the recent Oozing Wound album ‘Retrash’ earned very favourable reviews from Paul Scott-Bates; as such a split release has really got us excited!!

Apparently the project came to fruition when in May 2013, The Empty Bottle in Chicago hosted one of the nastiest line-ups in the history of the venue: Chicago thrash upstarts Oozing Wound opening up for Black Pus, the raucous and otherworldly solo project of artist and famed Lightning Bolt drummer Brian Chippendale, whose All My Relations had been released just a month prior.

An instant bond was formed that night between the Pus and the Ooze, and it wasn’t long before plans were set in motion for these kindred spirits to occupy the same slab of lovely vinyl. The Black Pus/Oozing Wound split captures both bands energy in a raw form.
Intended as a limited edition record, the split is not a mere raw blast, it shows a new side to Black Pus and is a teaser for the monster second album from Oozing Wound due out later this year (a follow up to 2013’s Retrash). 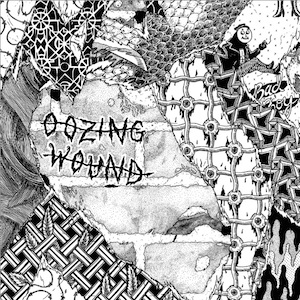 ‘Blood Will Run’ which opens the Black Pus side of the LP, is the first Black Pus track to feature clean vocals, free of the distortion and hiss that has always masked Chippendale’s vocals be that live or on record. Chippendale chose to record the vocals unaffected in order that they could be up front, in the listener’s face. The song deals with the senseless shooting of Jordan Davis by Michael Dunn after a disagreement over loud music coming from an SUV that Davis was a passenger in. ‘Total Eclipse’ is a 14-minute epic that, in classic Chippendale fashion, is driven by his galvanic drumming and caked in glorious noise.

Oozing Wound provide three tracks that are pure studio creations, the product of editing down 4 hours of audio into one concise 15 minute blast of primitive riffs, bass moans, and lurching drums. ‘Ganja Gremlin’ and ‘Aging Punk’ retain the bands signature reckless abandon and humour, but deviate from the format of the bulk of the songs on the band’s debut Retrash. ‘All Things Must Pass Out’ is pure, sludgy riff worship.

You can read the Black Pus’ blog here and listen to more by him on Bandcamp here. You can also find him on Facebook here and he tweets as @AhaFan88.