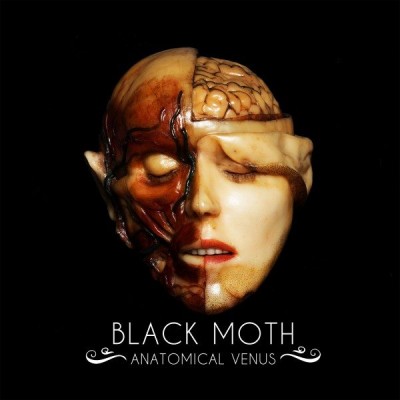 Seduced by their previous album, Condemned To Hope back in 2014 complete with Roger Dean designed cover, the Leeds/London quintet return with album #3 that delivers a healthy slab of hard driving hard rock tuneage with enough hints of  doom and stoner to sate the appetites of the hordes of Mothites.

Guided as per by the upfront and downright intensely passionate vocals of Harriet Hyde but cleverly avoiding the ‘female fronted’ tag, Anatomical Venus finds the influences still there; the darkness of Sabbath with the bleak edge of The Stooges and Nick Cave and travelling a path trailblazed by the likes of fellow British doomers, Electric Wizard and some of the psych rock guardians of the galaxy. All’s well with the world.

The change of personnel with the addition of guitarist Federica Gialanze might have changed the sound a smidgeon, but we’re talking evolution, not revolution. Black Moth have evolved, not…revolved…., tightened things up a bit and made the direction a tad sharper although Harriet Hyde has called the album “heavier than anything we’ve done before.” That said, there’s a definite sense of melody, none more so than in album opener Istra whose familiar crunching riffs are tempered by some heavenly moments. Along with Moonbow and the space rock intro that gives way to a devilish march in Sisters Of The Stone, it’s an impressive return as the Moth indulge in getting out there with some sinuous and sinister meanderings.

The studio pairing of Andy Hawkins and Russ Russell have twiddled their knobs and brought a clarity to the standard dense and overdriven wafts of contemporary psychedelia while allowing the band to maintain their trademark swirling and electric arrangements.

Federica’s credentials playing the Iommi parts in a Sabbath tribute come to the fore with a vengeance on Severed Grace while lyrically there’s a side step borne of necessity in setting some of the music to poems written by band friend Jessika Green that lend a more, erm, poetic sense that might previously have been unchartered territory. The short, sharp stab of A Lovers Hate however is very familiar, evoking early Maiden; an attitude and a vibe about as punky as you can get without the safety pins and the gobbing, in contrast to Tourmaline that ponderously lumbers a path of monolithic depth charge chording and slowly tolling and tumbling notes.

If it ain’t broken, why fix it, maybe just add a little polish. Anatomical Venus shows a few changes to the Black Moth ethos, yet may prove to be the album where they are finding their own path. One that courses them on their way to fulfilling their ever evolving destiny.

You can watch the video for Sisters Of The Stone here: