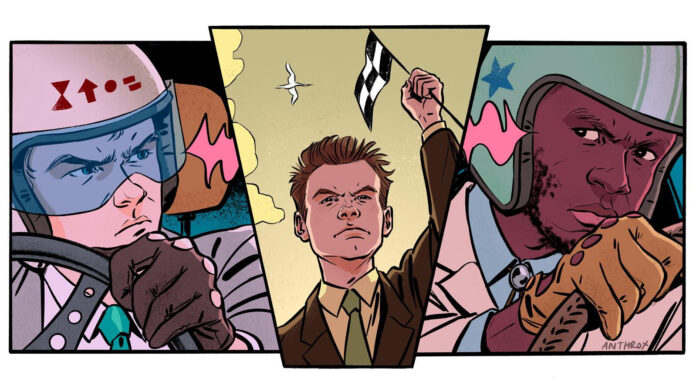 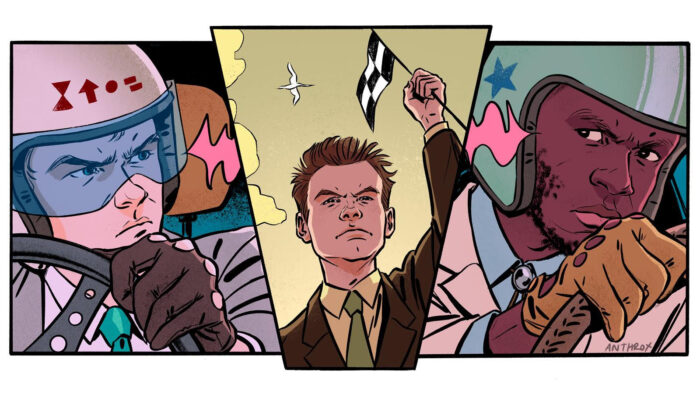 The weird, bonkers and wonderful black midi are back with a cracking new album after the glorious disjointed experimental debut of Schlagenheim. You think that was it? Well think again. They’ve stepped up a few notches on the weird-o-meter and make a mind melding racket of clued up noise. Read on…

black midi announce Cavalcade, their new album out May 28th on Rough Trade, and today offer its lead single/video, “John L.” Cavalcade is a dynamic, hellacious, and inventive follow-up to 2019’s widely-praised Schlagenheim, “a labyrinth with hairpin-turn episodes and lyrics full of dourly corrosive observations” (New York Times, Best Albums of 2019). It scales beautiful new heights, pulling widely from a plethora of genres and influences, reaching ever upwards from an already lofty base of early achievements. black midi — Geordie Greep (guitar, primary vocals), Cameron Picton (bass, vocals), and Morgan Simpson (drums) — picture Cavalcade as a line of larger than life figures, from a cult leader fallen on hard times and an ancient corpse found in a diamond mine to legendary cabaret singer Marlene Dietrich, strolling seductively past them. “When you’re listening, you can imagine all the characters form a sort of cavalcade. Each tells their story one by one and as each track ends they overtake you, replaced by the next in line,” comments Picton.

Album opener “John L,” available for 12” pre-order today with b side “Despair,”  has a massive sound, driven by some gutsy Discipline-era King Crimson thrust, and energy wrought by the inclusion of Jerskin Fendrix on violin. The group tease the raging track to the point of nonexistence before leading it through caverns of reverb and gauzy snareskin landscapes, just for it to return, hitting hard as hell once more. The story painted is a jet black comedy about what happens to cult leaders when their followers turn on them. Its equally massive video was directed by choreographer Nina McNeely, known for her work on Rihanna’s “Sledgehammer” and Gaspar Noe’s Climax.

The groundwork for Cavalcade was laid in 2019 — musical sketches that had been brewing since the release of Schlagenheim began muscling their way into black midi set lists and finally became individual entities. But with this album, there was a “yearning” to be more considered and record something that was more harmonically interesting and challenging. “It’s easy to get wrapped up in the improvisation myth of divine intervention, that if a song doesn’t happen in the room naturally without it being guided by someone specifically, when we’re all just feeling the vibe, then it’s not proper and it’s not pure,” says Greep. “That’s kind of a dangerous thing because you end up never trying something different, or you just abandon an idea if it doesn’t work at first because you’re always waiting for that thing to arrive perfect.”

With this new approach in mind, half of Cavalcade was written by individual members at home and brought to the table in rehearsal. Simpson confirms it was to their advantage: “The experience this time round was completely the flipside to Schlagenheim. A lot of the material was really fresh but that was something that played into our hands and we relished it.”

After initially recording “John L” with producer Marta Salogni in London, the band found themselves in the aptly named Hellfire Studios, in the Dublin mountains, in summer 2020 under the eye of John ‘Spud’ Murphy. Geordie comments: “It worked really well with John. We wanted a natural, open sound combined with fourth wall breaks – for lack of a better expression. Do you know on record when you can hear the tape screeching, the things that make you aware that you’re listening to a recording? [With a lot of records] it feels like either you’re listening to the ECM, high-fidelity, 25 mic amazing sound or you have the lo-fi album full of crazy effects. And I thought, ‘Why not have an album where you combine the two?’ That was one of the main ideas going into it and John was very keen on that idea.”

With original band member guitarist/vocalist Matt Kwasniewski-Kelvin taking time away from the group to focus on his mental health, black midi chose to augment their sound on Cavalcade, rather than replicate it, with saxophonist Kaidi Akinnibi and keyboard player Seth Evans.

Last week, indie retailers collectively curated a list of 10 songs for black midi to consider for a cover. Beginning today through March 25th, fans can vote for their favourite potential cover on black midi’s website. There will be 5 uniquely curated polls, resulting in 5 unique flexi disc options; one each for US indies, UK indies, Tower Records in Japan, Rough Trade Shops and International. A limited amount of standard album pre-orders will come with the market-specific flexi.

black midi will be performing live at Alexandra Palace Theatre on Nov 11th.  Tickets will be on pre-sale from 31st March and General Sale from 1st April.