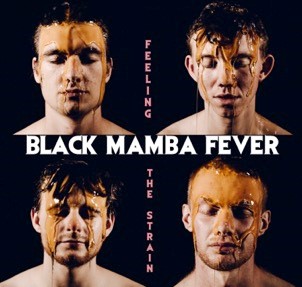 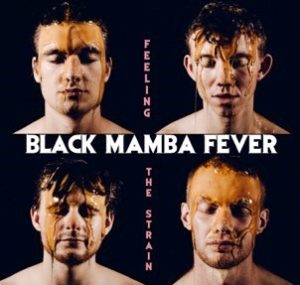 Conjuring up visions of the sweats and salivation caused by the world’s fastest snake gives you something to live up to. If it’s the psychoactive drug causing prison riots Sheffield’s Black Mamba Fever might want to cancel that Johnny Cash style gig.

At the Tramlines Festival in their hometown debonair front man Louis Ashman took to the street outside the pub. As one of the huddled masses with his nose pressed against the steamed up Tramline window it’s an experience I would very much liked to have witnessed. 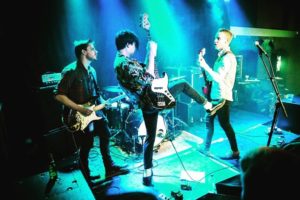 These days its full steam ahead as the band release the physical hold in your hand version of rollicking debut single “Feeling The Strain” on January 13th. Proving that primal trumps progression this was the first song the band wrote and revolves around an insistent riff from guitarist John “Regular” Travers. Add some time honoured backing vocals to an immediate chorus and the ingredients for a proper 45 are here.

A “Psycho” style shower scene in a video with enough stray syrup to heal the post Bake Off divide lets Ashman put the performance into his art. Playful with a hint of menace lyrics well suited to his channelling of a little bit of inner goth. The B-side may even help with the “ice cream headache”. “Fake Blood” allows the band time to breathe during the eminently reasonable premise that horror films are better company than people.

With some serious reference points in the likes of the Cramps and Jonathan Richman the song could be the sort of thing Alex Turner got all misty eyed about before he disappeared up Josh Homme’s exhaust pipe. It even overcomes the songs professed affection for all things eighties by sailing right over my head. Really it wasn’t good, ironically or otherwise. Even Wham.

Other genres get endless platitudes for endless repetition whereas loud guitars will always soundtrack any onscreen tear up. Come on Attenborough give the Sigur Ros a rest and get Black Mamba Fever on board.

Available to order here and here.  The band are on Facebook.