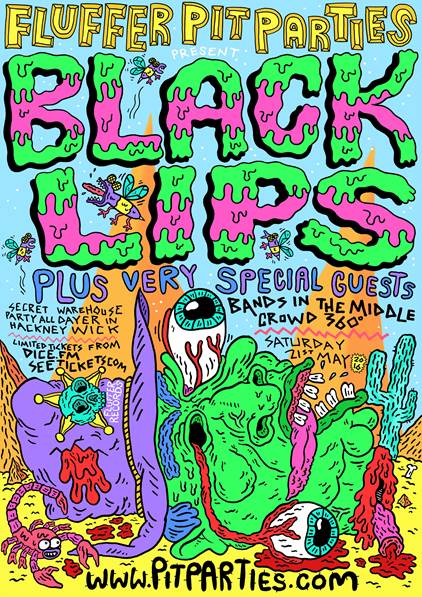 Black Lips/Bo Ningen and others

Tommy Mack checks out Fluffer Records brilliant gig/party concept on a  day off from  fronting spiky upcoming London based band White Ape  who have been described as ‘A musical fist-fight between Johnny Rotten Rockabilly, The Fall, big melodic choruses and enormous hooks’.

For five years Fluffer Records has been one of the finest new labels at the core of the revitalised UK punk scene. Their deafeningly loud Pit Parties have been packing out their warehouse venues for nearly two years, growing on a huge word-of-mouth buzz.

The Pit Parties are built on the punk spirit of breaking down barriers between performers and audience: There’s no stage, bands in the middle, crowd 360° and of course, the best and wildest bands from the UK and beyond giving full-on sweat-drenched performances.

Pit Party #7 is the most ambitious yet, a bigger venue, a stellar 12-hour line-up and of course, their biggest headliners by far, Atlanta’s irascible Black Lips. Sadly, there’s an actual stage, built around a set of columns in the middle of the venue but it’s a price worth paying for a line-up of this quality.

Black Tambourines warm the rafters up nicely with their noise saturated, groove-driven retro rock&soul racket. The guitars echo off the ceiling, reverberating around the concrete and metal setting the noise levels impressively high for an early start.

Up next, Wonk Unit wrong-foot us with the scabrous off-kilter lo-fi pop of Horses before letting rip with their Oi!-flavoured punk stompers. Short, sharp and nasty, anthemic minor key melodies powered by a maelstrom of noise. Crunching punk power-chords vie for attention with knowingly yobbish vocals and surprising blasts of trumpet and keys. Shaven-headed singer Alex prowls the stage, dispensing banter and pithy kitchen-sink wisdom, a charismatic frontman with a wry Viz-magazine sense of the absurd in the the grotty bit of life. His gutteral south London vowels spin tales of wearisome drunken mates (“everyone’s got one and sadly it used to be me a lot of the time”) and ‘Nan pissing with the door open’ but he isn’t afraid to chuck in a little poetry or a serious anti-domestic violence song. Finishing with the inverted-ska stomp of Elbows, Wonk Unit bring good cheer and wit to the sweaty surroundings.

Virgin Kids take things into much dirtier territory: the scuzzy Pavement-style lo-fi noise pop of their debut album bleeds out live into fuzzy Neo-grunge thrash, slyly infectious melodies peeking through the distorted wall of filth. Earlier, bassist Paul (Spurs) shares mutual football commiseration with White Ape guitarist Jim (Gunners) over a beer out back.  “I hate you all” quips Asher before unleashing another fearsome thrash.

Heck‘s brutal punk-metal continues the assault on the senses, screaming vocals compete with sludgy discordant guitars and pummelling drums to pound the eardrums. The likes of The Breakers lurch between all-out frenetic assault and doomy post-Sabbath moves as Heck hurl themselves around the stage. Out into the crowd too, Johnny straddling the bar to pull off a guitar solo and diving into the thrashing moshpit again and again.

Bo Ningen continue the heaviosity, their psych-metal drone rock obliquely resembles 21st century Hawkwind: Taut, twitchy trucker-rock grooves underpin sheets of squalling guitar and squelching psych-noises. Beautiful, brutal noise and unrelenting pile-driver riffs soar over the heads of the growing crowd, reverberating off the hard walls. The band’s odd, monk-like (and one nun!) appearance only adds to the sense of something otherworldly and transcendent.

The air hangs thick with sweat as the road crew haul Black Lips’ backline onstage. In truth it’s more like breathing steam than air. I can’t remember the last time I sweated this much at a gig and that includes on stage! Apparently the delay is a logistical hitch but it actually works a treat, winding the audience up to fever pitch waiting for the headliners to take the stage. Black Lips are introduced and the crowd explode, releasing the heat-crazed pent up tension of the last hour.

Bodies foam and surge as the drums clatter and the choppy guitars of Family Tree snap and snarl. A leather-clad woman surfs overhead once, twice, three times. Hoards more follow, barrelling over the top and stage-diving back into the crowd before the bouncers pile in, bodies go sprawling on the floor, sweat and beer flying everywhere.

Black Lips’ self-styled Flower Punk reeks of the seamy underbelly of boho America: bong hits in trailer parks, bathtub speed and moonshine, a hedonistic life on the road. They possess a sort of rascal-ish glint-in-the-eye danger somewhere between Ken Kesey’s Merry Pranksters and The Monkees. Early gigs were notoriously chaotic on stage and off but tonight the band play a lean, no-nonsense set with little in the way of hi-jinx or chatter.

When a band is this steeped in their own legend, it’s easy to overlook what accomplished songwriters they’ve become, their raw, trashy garage rock’n’roll sometimes punishingly fuzzed-up, sometime strung-out, sometimes touchingly tender.

O Katrina kicks off a seething circle pit, arms and legs flying everywhere as the huge spongy bass seems to soak into the rank, sweaty air while crowd holler along with the woozy swagger of Boys In The Wood. Dozens of people pile on stage for the closing Bad Kids, their bittersweet jangling ode to teenage delinquency and then we’re off out into the night, drenched in sweat and beer but grinning from ear to ear.

Kudos to Fluffer for putting on such great shows and doing something creative to play with the standard gig format. If you’re around London and you’ve a penchant for punk rock, you could do a damn sight worse than check out one of their Pit Parties.