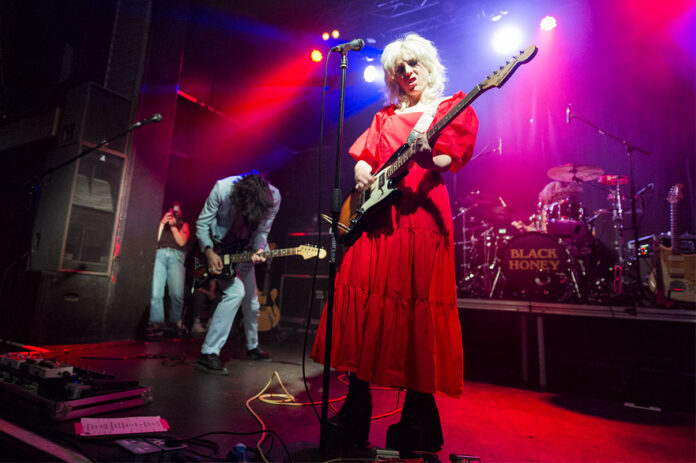 Brighton Indie rock band Black Honey were a few days into their UK tour supporting the release of their second album ‘Written and Directed’ as they touched down in Manchester. Louder Than War photographer Melanie Smith was there to capture the action.

Manchester was buzzing with live music tonight, everywhere you turned there was an amazing gig, Fontaines DC, The Skids, Doctors Of Madness, Blossoms and Rick Astley covering Smiths songs and Echobelly. However, out of all these shows I chose to photography Black Honey at Manchester Academy 2.

Unfortunately due to heavy traffic in Manchester, I missed the first support band of the night ARXX. Phoebe Green was the second support act, who burst onto the stage possessing a breezy infectious manner, although the sound mix didn’t do the band any favours with a lot of reverb and speakers vibrating so badly.

The Black Honey gang emerged onto the stage around 9:45 pm from the get-go they fired up the crowd with their own brand of indie-rock-pop mix of tunes. Showcasing new powerful tracks inspired by strong independent women from album Written and Directed, as well as songs from their first album.