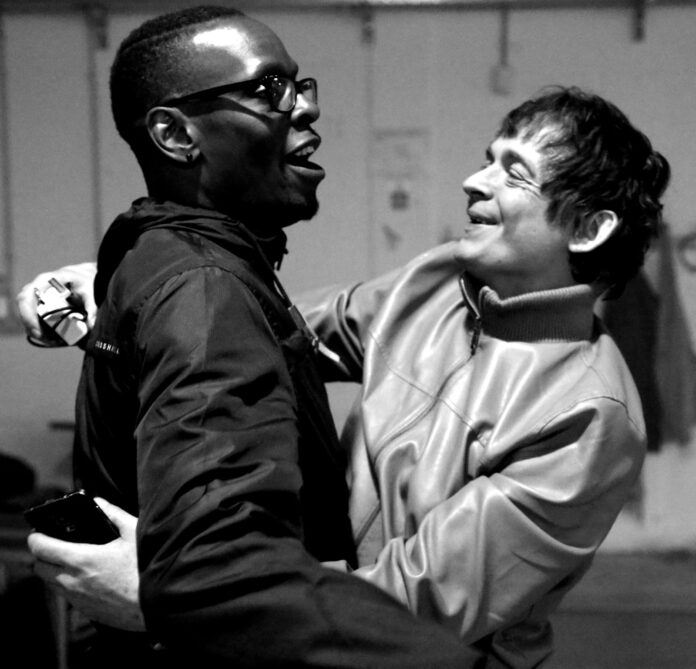 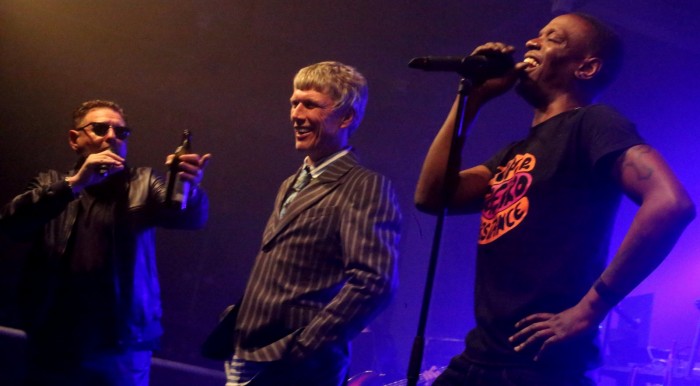 ‘Joyful and triumphant’ as the old song goes.

Black Grape’s old song in fact. Their scrunching, bouncing and perfect debut single, The Reverend Black Grape, the song that was the perfect calling card for the post Happy Mondays band. A joyous, bouncing piece pop funk soaked pop with sticky, black treacle groove and masterful surrealistic lyrics delivered with a neo Dylan sneer  stained with Manc excess. The version tonight is not even the best thing in the set- that’s how hot the band sound. it’s welcomed like an old friend though and the rammed out, sold out room full of craggy faced veterans and surprising amount of youth come to peer at a band who come from the times when the madness was real are all going crazy, grinning crazy.

This is the song that defines the mid nineties more than any other with its Parliament Funkadelic dredged through the northern rain and ‘fuck me I’m still alive’ sunshine of the time. 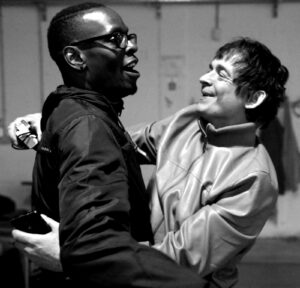 The song perfectly captures the evening as Shaun Ryder, the poet laureate of the mad fucker generation steps back out with his idiosyncratic schizoid funk crew and tears this new and latest Manchester venue apart.

Manchester is the music capital of the UK now. On this Saturday night there was more gigs in town that any other city including London. Your head turns left to right just trying to work out where to go for the high decibel fix but Black Grape are the clear winners as their debut comeback show has event written all over it. It’s got the oozing, mad fog of rough hewn, old school Manc night out – that creaking madness of the old skull, old school 24 hour party people.

The night is gloriously off kilter from the start.

A benefit for Bez’s Reality Party that sees Shaun’s perfect foil star in a money maker for his anti-fracking eco party who are standing in Salford where he is currently second favourite with the bookies to win the seat in the modern fractured post politics climate of the UK.

Bez is decked out in a sharp pin stripe tonight and does his speech bit but it’s when he takes the stage with Black Grape for the encore that the temperature really sores. With his added presence the glorious Grape frontline triumphate of Shaun, Kermit and Bez is on charisma overload and their goofing about to the dislocated bass heavy jive behind them brings the house down. 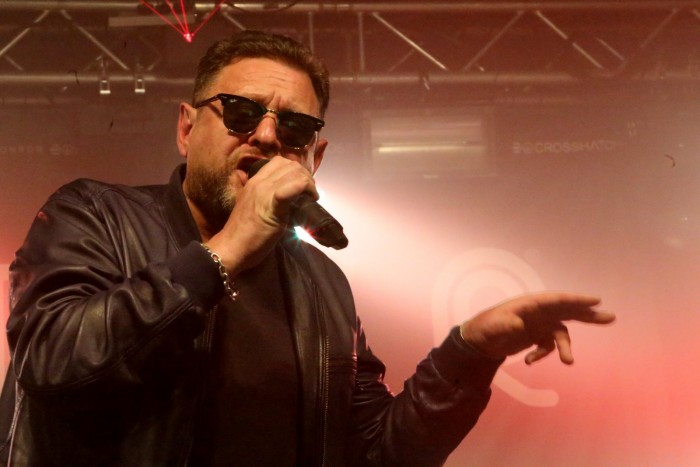 Previous to that the set had been primed for a glorious return. There was plenty of excitement in town and the new venue inside the old Granada buildings and named Factory in dedication to Tony Wilson – another of the city’s favourite sons was a perfect rough hewn setting for the concert.

Set inside one of the of the old TV studios which is now stripped bare and full of nooks and crannies of northern TV history was perfect for this comeback. Everywhere you look there is Granadaland archaeology – the Coronation Street TV set, the old studio where the Sex Pistols played their first TV appearance and the ghost of Tony Wilson hangs around the proceedings grinning that mad handsome grin and talking pretentious and ridiculous quotes at bemused Salford youth as he thundered around with his unique energy.

Another of those great indie mentors was in the house tonight, Alan McGee – who is managing this comeback and his own unique and dangerous energy was everywhere. McGee has found a new role as the saviour of the madcap- the Jesus And Mary Chain tour earlier this year was a high profile triumph with the band never sounding better and Black Grape seem to be set on the same road. I’m not sure what McGee does to these bands but he makes them feel vital again and just by being there he drags something extra out of his charges.

Ferchrissakes even Shaun Ryder seems to be enjoying this and the famously stage shy singer has a big grin on his face and looked leaner and meaner than he has done for years.  Like a lyrical prize fighter back to reclaim his crown Shaun is on fire and totally engaged. He already has the endless tour of the revived Happy Mondays in his back pocket so maybe he could afford to be more relaxed but I’ve never seen him look so happy on stage as he dealt out those sharpest of lyrics over the bouncing grooves of the songs with perm bouncing foil Kermit bounding around him like the lunatic pop star he was born to be. 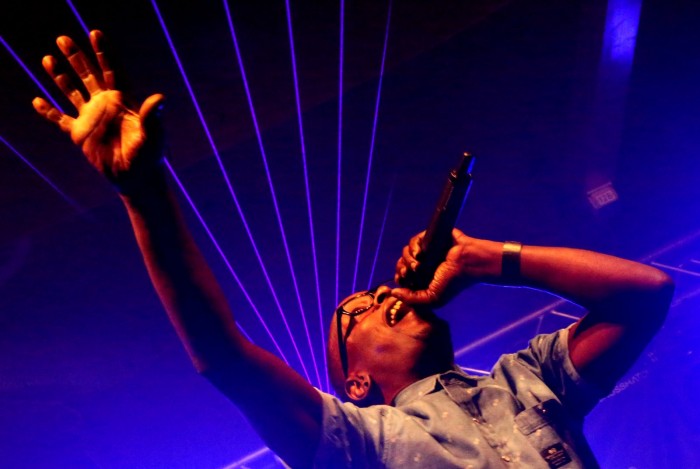 Kermit made his name in the early nineties in the Ruthless Rap Assassins – the Moss Side rap crew whose two brilliant alums were overlooked in the indie wars but really stand the test of time with their choice of samples from Cymanade to classic tripped out pop and tough grooves and sharp lyrics. Kermit was their Flavour Flav madder and smarter and his off kilter lifestyle saw him just about stay on the rails, impeccable charm and wild high IQ intelligence was always going to score somehow and he found the perfect home in Black Grape and it’s great to see him back with Ryder where the two of them perfectly compliment each other in a rare reflection of the true multi racial flavour of Manchester – a city that is the ultimate cultural melting pot. 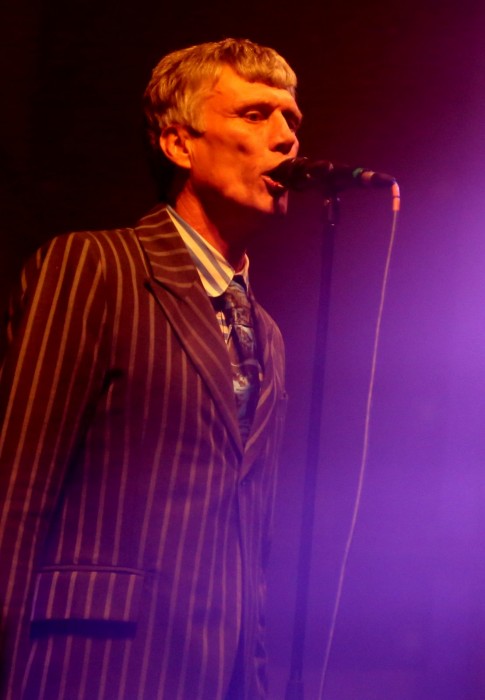 A pop melting pot that Black Grape reflect with their hip, rock, funk, pop, indie, metal fused monster groove. The can rock which made Metallica big fans and they can low down groove like Snoop Dogg and they can swing – the old songs sound great and surely there is enough left in this tank to make a 21st century album – maybe get Snoop at the controls?

The musicians may be different from the originals but they have nailed the monster grooves perfectly – the bass playing is superb and the slower heavy groove songs really sound heavy as the rhythm section locks in with the locked down perfect groove guitar swinging over the top. The cool thing about Black Grape is not only did they release killer singles but also these mental grooves with dark and dangerously funny lyrics stabbing over the top. Let’s not forget their debut album was number one and if the Britpop story was written without them then that’s all the better because they were too quirky, too weird and too cool for the more straight laced Britpop narrative.

They sung of the real lunatic life, the druggy weirdness of the street, the twisted reality of the great acid house comedown. This is was a live documentary full of cultural references and surreal stained weirdness of when the going got weird and it should not sound this good all these years later.

Surely this should be a fucked up and burn out ghost band and even if the audience look fantastically rough in sections with real survivor  faces  that tell many tales of crazed night outs who hug each other shocked hat they are still standing after that chemical lunacy of their fast fading youth the band somehow have come through fresher than ever.

Shaun Ryder may finally have found his space.

This could go anywhere.