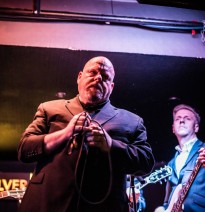 While many men of his age will either have given up live music altogether or settled for playing cover versions of popular hits , Mark Tilton has chosen to take a different path. There’s something he wants still to tell us , something inside that needs to come out. He’s been a post punker back when post punk was in its pomp – guitarist and writer in the legendary Membranes and later with Marc Riley’s Creepers. Since then, he’s scripted films and video shorts , written short stories and taken a large number of greenish tinted photos.  He may or may not have tried watercolours ,we just don’t know but what’s clear is that still there’s more he wants to say.

This time he’s chosen  a return to music – Black Crack is his new five piece outfit . What will surprise some is his delegation of guitar duties to others in order to take on the role of front man vocalist . Or maybe wild man would be more accurate- his very first act as Thursday’s set began was to leap from the crowded stage, kicking away the monitor speaker and hurling the mic stand  angrily aside. An impressive show of force and the fact of the mic stand hitting me painfully on the legs and torso meant I felt fully engaged from the start. It was like the the 70’s all over again as I flung it angrily back while the guy in the audience next to me shouted “Fuck off” in my ear , an instruction he repeated regularly throughout the evening.

All very edgy and punk and this seems to be the angle Tilton has chosen for Black Crack, song titles such as “Bad Bad Time”, “Hey Fucker” and “A.N. Other Hate Song”  further indicate the direction the band is aiming for. The sound is loud and tight with C.C.S. Meeke (rhythm gtr), Adrian Smith-Tuft (bass)  and George Milton drums creating a hi voltage backdrop while lead guitarist John Wygens explores a Robert Quine/Fripp approach to his solos, coaxing an intriguing series of textures from his Gibson SG and de riguer bank of pedals. In a set of around 40 minutes Tilton impressively keeps the energy levels high and his crazy dude persona intact. The lyrics are as inaudible as at most loud rock gigs but the words you catch appear to be describing unsavoury deeds conceived somewhere from deep within Jung’s “shadow” side of the mind.

The only moments when things sag a little come when Black Crack opt for the kind of generic hard rock  motifs that we’ve heard from countless guitar bands before, a tendency to “chug” you might call it. Also I found the sound too full-on for too much of the time. It might break things up a little to have, for instance,  a song featuring Tilton”s vocal paired with  Wygens’ ambient guitar wailings alone. This could further allow the vulnerability and sweetness in Mark’s voice, qualities which I have heard on his demo tapes, to cut through .Such nuances tend to be swamped when the band are at full throttle.

Overall though, a powerful and exciting set which was well worth making the trip to a cold and wet Finsbury Park to hear. As I drove home along a pitch dark A12, a small mammal of some kind suddenly appeared and froze in my headlights. A split second later a sickening thud confirmed that I had smashed into it . I felt shocked and upset by the incident but also found my myself wondering if the Black Crack incarnation of my normally thoughtful and gentle friend Mark Tilton might not have relished the moment, insisting that the car be stopped before lurching off in search of this fresh roadkill corpse for purposes which the sane mind simply will not allow itself to contemplate ….

Mere conjecture of course but one which emphasises that if it’s the cosy sound of bands like Coldplay and Snow Patrol that you’re after, you’d be best advised to steer clear of Black Crack. My instinct is that it’s fans of the likes of Iggy , Pere Ubu and The Birthday Party  that this band are far more likely to satisfy.