Black Bullets describe themselves like this: “The Black Bullets were formed in the dark depths of dec 2011. Four bastard children from hell locked together to produce the most filthy rock n roll to penetrate your ears.” Ged Babey’s a fan. Read his appreciation of them below.

“If it’s done properly, a clichÃƒÂ© can be a very powerful thing indeed.”Â

The Black Bullets are one great big, fat, walking, talking, rock’n’fuckin’roll clichÃƒÂ©. They do it properly with 100 per cent commitment and are a very powerful band indeed. On their facebook under Genre it says “Rock / Full Speed Rock n Roll / Punk Rock”Â. That’s only half the story. Between them on their collective skins they’ve got more ink than a legion of squid at a tattoo convention. 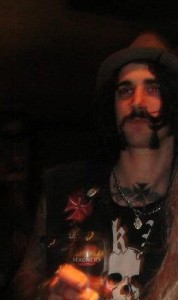 Rob Castle is their lead singer, guitarist and proud owner of the best mutton chops since Lemmys. He is a total clichÃƒÂ© but one of those people you only meet a couple times in a lifetime. He’s a born star, a heroically reckless inspiration but a bad example to the kids. Like a Thunders or a Vicious or a Stiv Bators; only without the complete set-to-self-destruct mechanism. Hopefully like Lemmy or Keef he has a hold on his brinkmanship and can pull back just before the edge. Instead of wearing a Maltese Cross round his neck he has one inked in his skin at the top of his breastbone. He dates the best-looking Burlesque artiste in town. He’s a cool motherfucker.

Too Loaded For Love ”â€œBlack Bullets

Rob Castle used to be in XX Cortez; the best punk rock band you probably never heard of,,. They played ”Ëœ77 Roxy punk at the speed of LA Masque punk and had song titles like ”ËœSlut’. They were obscenely good. When they split, former BMX champ Rob got into motorbikes, great big choppers and as a consequence of hanging out with bikers got more into Metal. The decent stuff; Motorhead, early Guns n’ Roses, AC/DC”Â¦ He found some brilliant musicians with ability and attitude and grew his hair and some face fuzz. Bassist Jim Bones is a hyperactive Mohawk with PUNK tattooed on his knuckles. Guitarist Stevie Pearce is a virtuoso guitarist and Carl Donoghue beats seven shades of shit out of the drums.

Metal has a million sub-genres. The Black Bullets Metal is Born-of-Punk Metal, ”ËœVery Metal”Â, Biker Pub Jukebox Metal and Full Speed Rock’n’roll Metal. It’s Knowing it’s a hairsbreadth from Parody Metal but Thinking it’s the Best Ever Metal. Slow Songs are for Pussies Metal. Its Heavy “Like your fucking Brain”Â Metal. If you get the picture”Â¦

The EP is a blast. Five songs. Cool Logo. Naked chick with a gun on the back. It’s live that they are in their element; all over the stage, climbing anything climbable, teetering on stacks, drumkit, monitors, jumping off the stage into the audience. They gurn and swagger and look cool and dangerous, all the time making a ferocious racket.

Amongst their original songs they do one cover; Killed By Death ”â€œ a brave, arrogant move; Motorheads best song in my book ”â€œ which gave its name to a whole genre of rare, mental punk singles collections. They play it to perfection. Killed by Death Metal!

I’m not denying the fact that they are Legends, heroes, but with Lemmy, Iggy, Charlie Harper and so on all at 65 or over, rock’n’fuckin’roll needs Young Blood. Young blood that’s not afraid to spill a bit occasionally. Young blood that knows better than to be record company lapdogs and politically correct pussies. Young blood that rocks as if its life depended on it. Thrill-seekers, nihilists, creators of Dope and Guns and Fucking In the Streets Metal. Rock’n’Roll needs the Black Bullets as much as they live and breathe rock’n’roll.

Well that’s a pretty unprofessional, fact-free, over-the-top review”Â¦ yeah well, that’s the effect the Black Bullets have on you, well, me. Load ”Ëœem up.

Now stream some music by the Black Bullets and see if you agree with Ged:

All words Ged Babey. More writing by Ged can be found here.