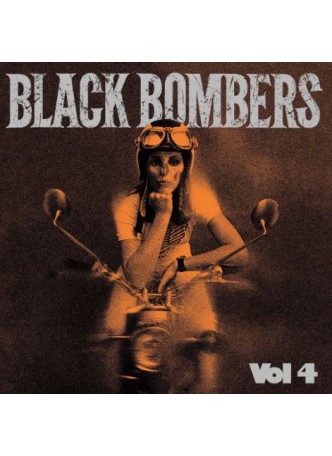 Brand new EP from noisy Birmingham trio the Black Bombers, who feature members of the Prefects, Gunfire Dance and Horsefeathers……this new 6 tracker contains a cover of Green On Red’s Hair Of The Dog rendered in a rocked up fashion….LTW’s Ian Canty investigates

Down the years the Midlands has always been home to dyed-in-wool Rock and Roll thud, with the participants ruthless in their pursuit of the ultimate grungy high, making their music as loud as it possibly can be. The Black Bombers are 2019’s model, primed for attack. Their lineage is top notch: David Twist drummed for the legendary Prefects and also Brum cult 70s band TV Eye and Nikki Sudden/Dave Kusworth’s Jacobites. In addition bassist Darren Birch played in Gunfire Dance who signed to Island and is a member with Bombers’ singer/guitarist Alan Byron of Horse Feathers.

Other activities the various band members have undertaken were alongside folk from the Heartbreakers, the Damned and Lords Of The New Church, which should give you some idea of the kind of devil-may-care Rock action that is on offer here.

The Black Bombers’ made their debut with the single Crazy in 2015 and followed up with another 45 entitled Rush and a self-titled debut album which arrived a year later (expertly reviewed by Gus Ironside here). Bristling with the kind of attack the Stooges and Radio Birdman brandished, they’re back here for another hot and heavy journey around Rock & Roll’s sleazier backstreets.

Sometimes the lyrics aren’t fantastic, but then again that’s far from the point of this band – the point seems to me is marrying their irrepressible energy and tough as nuts hardcore hammer to good tunes. The Black Bombers gleefully apply all of their vim and know-how here throughout. The songs of Vol 4 are not necessarily that fast, but always rock-solid and teak-tough.

They come storming out of the blocks with Day After Day, setting down their hard rockin’ mark from the off and this track is a real statement of intent. Relentless, which follows and could be termed their modus operandi, conjures a sound that is not a million miles away from being an update of the Pretty Things ’65 – which of course is always a good thing, hoarse vocals and jitterbugging Punk R&B mayhem with everything turned up to the loudest setting. The following Animals In Cages summons up a kind of Cook ‘n’ Jones feel (and anyone that knows me will realise I don’t say that kind of thing lightly), the slurring vocals an ideal fit for these dazed and contused veterans’ defiant stance.

Track 4, Gnarly, is a tense and atmospheric Rock ‘N’ Roll instrumental, some classy guitar work on this one. I love the bass playing on Sometimes, it really stands out and finally we come to that cover of Hair Of The Dog, rocking up the Green On Red song for all its worth. I enjoyed listening to Vol 4 and it really is 18 minutes well spent for any self-respecting rebel rocker and suspect that as a live act they “blow the bloody doors off” before coming back to give the doors one last kicking too.