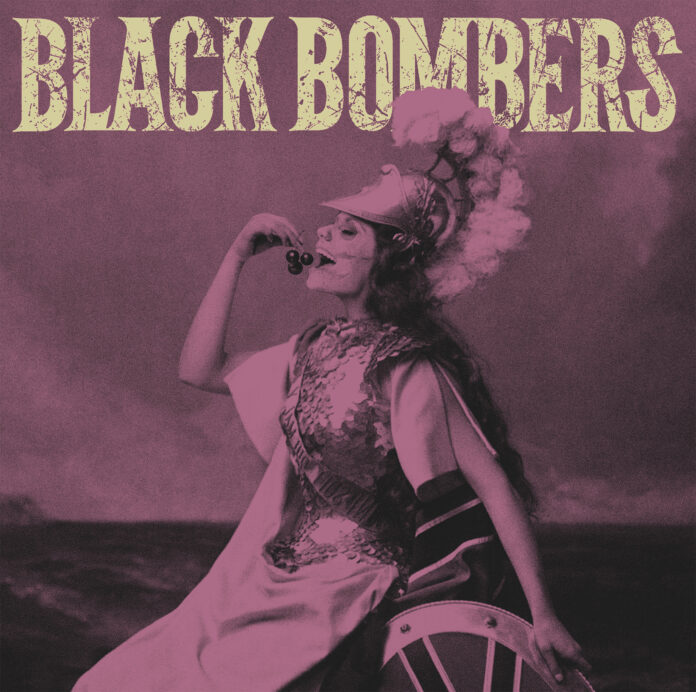 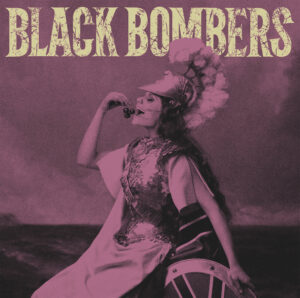 Birmingham Rock ‘n Roll veterans whose primal racket contains elements of both proto and post punk, drop a new 7″ on Friday, April 1st.  You’d be a fool to not get hold of a copy says Ged Babey as this is Maximum Rock’n’Roll Guitar heroism of a kind you rarely hear nowadays; a state of the nation eulogy that kicks ass and the best cover version you’ll hear all year.

I thought that Black Bombers were basically a ‘dope guns and fuckin’ in the street’ kinda rock’n’roll band, inspired by the MC5, Stooges, Heartbreakers etcetera. They take there name from a ‘regional term for black & white capsules containing biphetamine, a recreational drug popular in the 1970s’. But there’s more to them than just that…

The Last Bite 7 inch single is, to my mind an utter classic piece of heavy rock’n’roll.  It has the dark malevolence of a proper piece of early Gothic including a great guitar-sound not dissimilar to the one found on a lot of ’80’s classics. With the bass playing chords instead of notes, and the rhythm guitar shards it combines to make a multi-layered, epic sound. It’s a cliché but – Play Loud.

The lyric is an angry, despairing lament to the stupidity of roughly half of the population who left “Our pride as a nation in the hands of a clown”.  Depressing subject matter that takes flight on the chorus and electrical storm of guitar.  It really does have the dark euphoric energy of classic Gothic Rock’n’Roll.

All Fools’ Day 2022 seems the perfect time to release a track about false promises and the fantasy of returning to fading Empires. The recording for the single was originally carried out with engineer Simon Bishop during one of those brief respites from Lockdown in the Summer of 2020, and was then developed in the Soho studio of new Black Bomber guitarist Steve Crittall over the following few months.

The ‘B’ side of the single features Black Bombers’ cover of The Damned’s ‘You Take My Money’ – the much maligned second album being something of a band favourite. Bass player Darren Birch played with Damned guitarist Brian James in a short-lived lineup of his James Gang band.

All classic punk rock singles had an equally magnificent B-side – and the Black Bombers version of You Take My Money is totally fucking wild. It’s improves on the original by cranking up everything to the max. Steve Crittalls guitar-playing is histrionic, hyper and hysterical. In a good way!  He plays as if the world is about to end and he has two and a half minutes to make as much noise and bend as many notes as possible to create a sonic maelstrom that could just maybe prevent our annihilation!

Or maybe he is just showing off.

He has been described as ‘a rock’n’roll McGeoch’ and you can see, or rather hear, why on both sides of this vinyl.  He does need a fuckin haircut and a shave judging from his appearance in the Last Bite video, but he has added a touch of magic to an already very special band.

Here’s the video for You Take My Money.  Not suitable for those of a nervous disposition – or if you’ve just dropped a tab of acid.

The Black Bombers have dates around the country in the coming weeks and play the DIE DAS DER benefit show for Ukraine on March 27th at the Hare & Hounds, Kings Heath Birmingham.