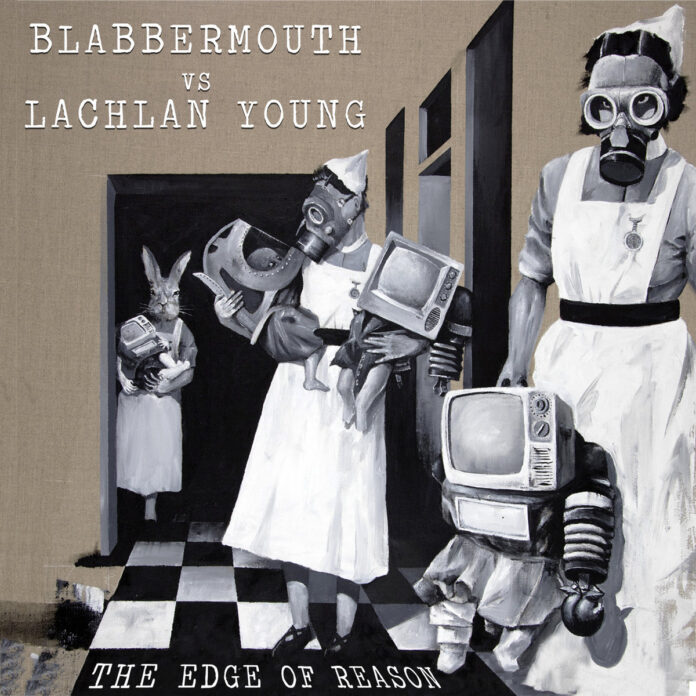 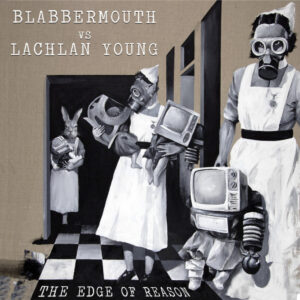 A welcome follow up (of sorts) to the 2019 Blabbermouth album ‘Hörspiel’ (LTW review) – I say of sorts as ‘The Edge Of Reason’ has suffered from a stuttered release due to the coronavirus pandemic.

Initially intended to have gained a full release via the Dirter Promotions label, this ultra-limited CD edition comes direct from the Blabbermouth Bandcamp page, though I understand a full LP & CD issue is intended later in the year.

In addition Blabbermouth, more familiar to you perhaps as Lu Edmonds (PIL, Mekons, & The Damned) on guitars and strings, alongside Mark Roberts (The Godfathers, Neneh Cherry, & Massive Attack,) on percussion, and keyboards have stepped aside and poet Murray Lachlan Young takes on the role of frontman… fear not, this is not some vanity parade.

Lachlan Young has previously supported the likes of Julian Cope, The Pretenders and has released numerous albums – at one point earning himself a £1M recording contract, more recently he has regularly appeared on BBC 6music which has been home to the albums opening track ‘And On The 7th Day’ a rhythmic exploration into the invention of tea and biscuits, educating on the creation of both custard creams and digestives, before (rightly) exalting the plain chocolate digestive over its lesser milk chocolate sibling.

You have got to see the video that accompanies ‘Cannibal Spanish Sex Slugs’ a cautionary tale relating to the voracious nefarious appetites of these particular molluscs and how “to lead them to their doom” all the while accompanied by breathy vocals courtesy of Brix Smith.

If you can get your head around the surreal lyrical material then there is much to gain from this album, Edmonds and Roberts provide the perfect platform for Lachlan Young to intone his stream of consciousness, his voice, a rich inviting coffee burnt baritone has real musicality – the result perhaps a mix of his Scottish and English heritage that adds bite to his pointed wit and observations.

The music is multi-layered, with shards of glistening guitar and strings, at times spacious, almost ambient as is the stage for ‘Dolphins (Take Over)’ with their “new clicky language” – surely they will rise up argues Lachlan Young.

Similarly ‘The Edge Of Reason’ provides the perfectly stand for Lachlan Youngs wordplay as he weaves images amongst the soundscapes peppered with percussive crescendos.

‘Cosmic3logy’ is both the standout track and the most conventional in its format and arrangement. Edmonds and Roberts propel the piece with hints of krautrock, a sticky bass and a stunning guitar riff that just shimmers exquisitely , whilst Lachlan Young steps up the lyrical pace, yet consciously rejects the option to actually sing as he examines where we as a species currently find ourselves, and at the speed we are travelling at.

‘This Poem Is Tired’ nestles on a jazz tinged piece that bizarrely sees Lachlan Young unwittingly impersonate occasional SUNN O))) vocalist Attila Csihar in his guttural delivery, whilst ‘Motorways’ sees Edmonds and Roberts offer up a glacial paced free jazz meander whilst Murry narrates the UK’s 70mph network “and that’s the lot… I dearly hope” before the “you may still need satellite navigation” retort.

Closer ‘Outro-Credits (Return Of The Slug)’ harks back to the “Hörspiel” album which utilised voice robots; for this piece the actual recording credits are electronically voiced over a wandering cinematic soundscape.

Once again Blabbermouth have crafted an album that sounds that like nothing else, an accomplished yet eccentric album that allows music and verse to perfectly coalesce.

Put the kettle on, make a cup of tea, press play, and enjoy another plain chocolate digestive.