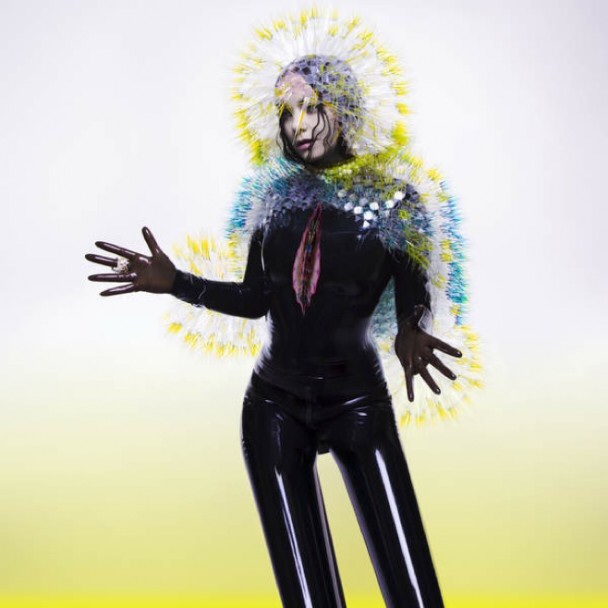 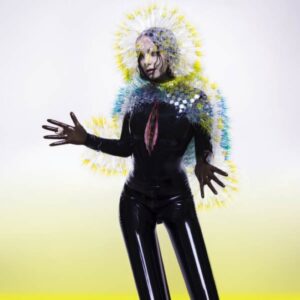 An album of heartbreak and imagination, of stunning musical boundary breaking and raw emotional power – and an album that appeared out of nowhere and in a rush. The title gives away the emotional backdrop of the album combining the latin word that means Vulna as in “wound” and “vulnerable: with cura or “the cure”.

So in that thoroughly modern way, here it is.

The new Bjork album was rush released to beat the internet, where it was leaked a couple of days ago. The whirring digital clicks of the endless freebie squad saw Bjork’s label at panic stations to get the album out before everyone bagged it for nothing, which nearly threatened to cloud over the fact that the album is an emotional masterpiece, a tour de force heartbreak album of love and loss sung over stark digital soundscapes created by the brilliant Arca and our own Haxan Cloak.

The sheer beauty and magic they created seemed to be tragically crushed by the bit torrent hooliganism like the Mona Lisa squashed through a photocopier, but here it is in full 3D form and an experience that is as emotionally draining and musically thrilling as hoped for.

Vulnicura is Bjork with all the masks off. One of the most creatively original people of her generation, in her long career the Icelandic singer has swerved from the child singer with a number one hit in Iceland to the anarcho punk experimentalist on Crass Records to the ice voiced goddess in the Sugercubes to the esoteric and adventurous pop star of her solo career.

It’s been quite a ride and seemed to have disappeared into a silence as stark as the interior of her homeland after her last brilliant nature soaked piece of Biophilia a few years ago until the sudden flurry around the new album. Inspired by the break from the father of her daughter, artist Matthew Barney, this is a record that drips emotion over the harsh and gorgeous digital sonic lava in that beautiful “human in the machine” clash that defines all great electronic music.

On her own press release she calls the record her ‘heartbreak’ album and it is a stark-staring-into-the-abyss of the pain and solitude of the emotional car crash of breaking up from someone you love and it deals with the powerful intoxication of love itself and the severe comedown when it almost inevitably goes wrong.

Written as a chronological story of the break up it starts with the nibbling uncertainty of the knowing it’s about to end to the break up itself and the dull pain of the aftermath with stunning vocals and lyrical shards and snippets that pierce the heart like knives.

There is the endless tension, fire and anger of the pre-break up in songs like Lionsong and then the actual aftermath of the break up itself in Black Lake, a song that drips an emotional intensity so rare in the blustering huff and puff world of pop culture.

Musically the album is beautifully sparse and full of new sounds and landscapes created by Venezuelan dissonant rapper, Arca who was the co-producer for most of the album and the brilliant British electronic wizard Haxan Cloak who mixed the album and conjured up his swirling electronic mist of imagination.

There are electronic bleeps and bloops, sweeping songs, sparse heartbeats of bit-sound and post electronic musics that create an adventurous new landscape for Bjork to fly free with her pain and melodies and still with that wonderful one off voice that can create a magic and emotion out of anything.

This is a musical world to get lost in and the first major work of the year.