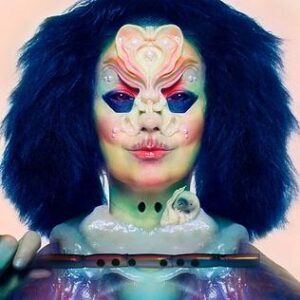 Björk’s tenth studio album sees her stepping out from the darkness of 2015’s heartbreak masterpiece Vulnicura and into a more positive world of her own creation. Simon Tucker reviews.

Trailed as a return to happier times after the heartbreaking and sometimes difficult to listen Vulnicura, and described by the artist herself as her “Tinder album”, Utopia promised to be a much needed step into lighter terrain for Björk and for her fans. Proceeded by two abstract and hauntingly beautiful singles (Blissing Me and The Gate) one got the sense that Utopia would return us to more familiar Björk landscapes. After one play through of this epic (in length and ambition) album you realise that it was a bit to presumptuous to believe that we were to walk down any previously stepped on musical path. Björk has been, and will continue to be, an artist unwilling to repeat previous works. She will never rest on her laurels and craft an album that is full of three minute singles. Always moving forward, Utopia finds Björk once more testing her audience. Willing them to join her as she maps out a complete 3D universe for us to navigate around.

Every single detail on Utopia is tangible and full of life. It is its own universe. An Eden in which it was Adam who bit the apple. Themes of new love and the rush of new moments of intimacy with another human being whether that be through physical acts or just sharing MP3’s are scattered throughout. However, Utopia is not some blissed out all you need is love ideal. There are moments of pain and suffering that have traveled with Björk from her last album and where that album was drenched in pain and of smashed promises, the lyrics about these moments on Utopia bite even harder as they are placed in a world of natural beauty and of optimism. This is most evident on Sue Me where Björk sings of her recent experience of being sued by the father of her daughter and the subject of Vulnicura. Björk’s defiant and powerful vocal (which is as flamboyant and charismatic as ever) strides through the song declaring that she won’t let her daughter “be cut in half again” and how he (her ex partner Matthew Barney) “took it from his father / who took it from his father / who took it from his father”. This theme of patriarchal damage to the female is scattered throughout and in Björk’s capable hands the issue about breaking down and defeating men but more about the empowerment of woman and what they can do to create a better world as she declares on Losss “Loss of faith just ignites survivors”.

For Utopia Björk has once again collaborated with the electronic producer Arca and it is this relationship which helps elevate Utopia higher. Together, Arca and Björk have developed an symbiotic relationship with each bringing enough of their own distinct personalities together so one does not dominate the other. This is certainly a Björk album but in Arca she has found an accomplice who not only aides her vision but one who has enough confidence in their own ability not to fall into a more engineer type role. Like the Visconti / Bowie relationship you get a sense that the duo are working in such harmony, each daring the other to go deeper and deeper into uncharted terrain with each release. On The Gate as Björk reaches the chorus with “and I care for you / care for you” Arca and her production rolls under her, helping to lift her vocals up before gently placing them down again almost like Björk is being lifted out from under water so her head breaks the surface with gleeful appreciation. The whole of Utopia is drenched in breeze and the lilting sound of the flute (created by a flute orchestra) but what stops the whole album drifting by is the off-kilter percussion which peaks on the magnificent Losss which begins with the sound of harp and flute before some aggressive almost gabber bass slams in underneath slowly becoming more and more ferocious. It is a glorious juxtaposition which in lesser hands would sound forced and untidy but here sounds like a most harmonious partnership.

As befitting the title, Utopia doesn’t have a fixed geography. A land with no borders. Sampled birdsong field recordings float throughout and the entire album is full of wind and light. A Midsummer’s Night Dream where new forms of humans and creatures can co-exist. This may sound too sickly sweet for some but like everyone who studies and adores nature, Björk knows that when you are in among the deepest and undisturbed landscapes danger can also be present for however good your intentions are when it comes to nature you are most certainly not the ruler. This point is driven home on the unsettling Feature Creatures and the extraordinary Body Memory where the instrumentation makes it feel like you are surrounded by wild cats perfectly highlighting the raw erotically charged union of two new lovers.

Utopia is not an easy listening experience. To fully grasp it takes time and patience. There is a distinct lack of melodies on a lot of the songs and many of them break the nine minute mark and whilst there is an argument that this could turn people off the album as a whole it is more important to approach this album as something entirely different to what has gone before. This is not to dismiss the three-to-four minute standard song structure as it takes a talent to create them, it is more like Björk has just chosen to take another route and it is up to us if we wish to follow her.

Utopia is a pastel chalk painting full of smudged edges. It is an album that takes a commitment on the part of the listener and will give you a different outcome each time you journey with it depending on what choices you make as a participant. It is an ambitious, deeply immersive and haunting album that promises you a better world is possible. Once again Björk has created an album that sits high and proud. Original, defiant, passionate and lustful. An absolutely extraordinary album.