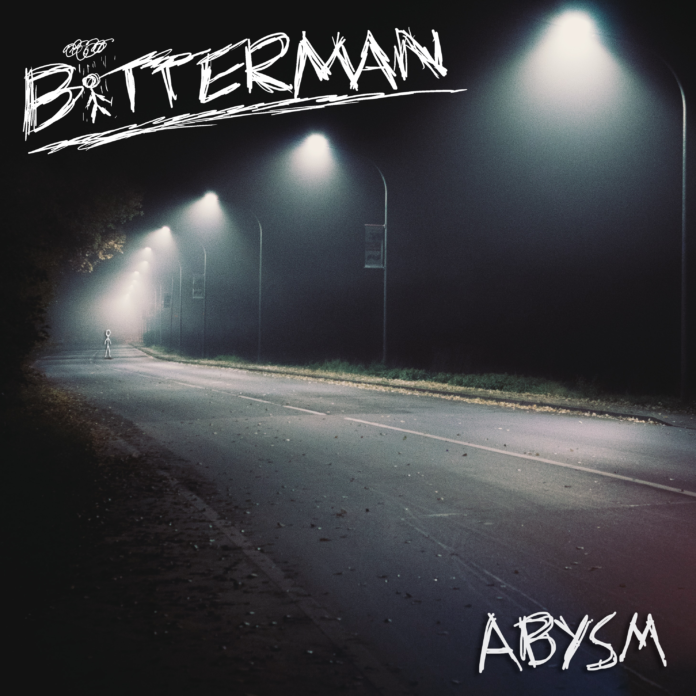 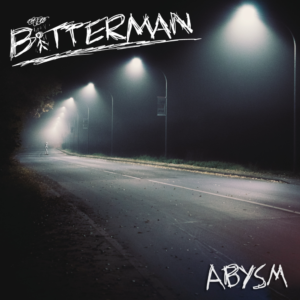 The latest offering from rhythmic rockers Bitterman is dark and heavy drawing on grunge and everything that has come since Tony Iommi first reinvented the sound of the electric guitar.

Bitterman inhabit the punk rock wasteland where grunge meets metal. It’s a little scary around here with dark skies, looming clouds and vengeful eyes watching you from the shadows. And the cover pic sits perfectly with this slightly oppressive underbelly – a deserted street with shadow invading the glare of the street lights. It’s the things you can’t see that are the worry.

Bitterman take an existential ponder over the meaning of life while exorcising their anguish and morbidity. Songs about planning your own death and the end of the world start to make sense sat alongside a song about sleep deprivation. Being awake when all others are asleep leads to dark thoughts.  Oh yes, this certainly is an abysm (noun. an abyss. “the abysm from which nightmares crawl”)

In truth, they are all very nice chaps, mainstays of the Portsmouth punk scene, highly talented, involved with various Portsmouth bands including Hack Job and The SLM. They can often be found at Portsmouth Punk Promotions DIY gigs in the area either playing, running the sound desk, or videoing proceedings for CBRG.tv. In guitarist Dave Sloan they have a talented engineer and producer.

The opening number of the 5 tracks, Ants, featured in the taster video above, is the lightest of the tracks, very much in grunge territory but there is always metal looming close.

The Bitterman sound is occasionally discordant but for the most part driving. Some of the heaviness is rooted in Sabbath (I mean, isn’t everything heavy worth a shit?). Not only in the guitar which delves Iommi tones on some of the damped downstrokes but occasionally there’s a little of Ozzy’s off-kilter deadpan in the vocals.

If you were looking for the For Fans Of recommendation I’d include The Melvins, Helmet and Prong for the rhythmic approach with the guitars alternately chugging and thrashing. Add in Alice in Chains, System Of A Down and maybe a little Machine Head and you’re probably in the right territory.

Get the CD from Bitterman on Bandcamp or Facebook

Or from Charlies Big Ray Gun Records also on Facebook