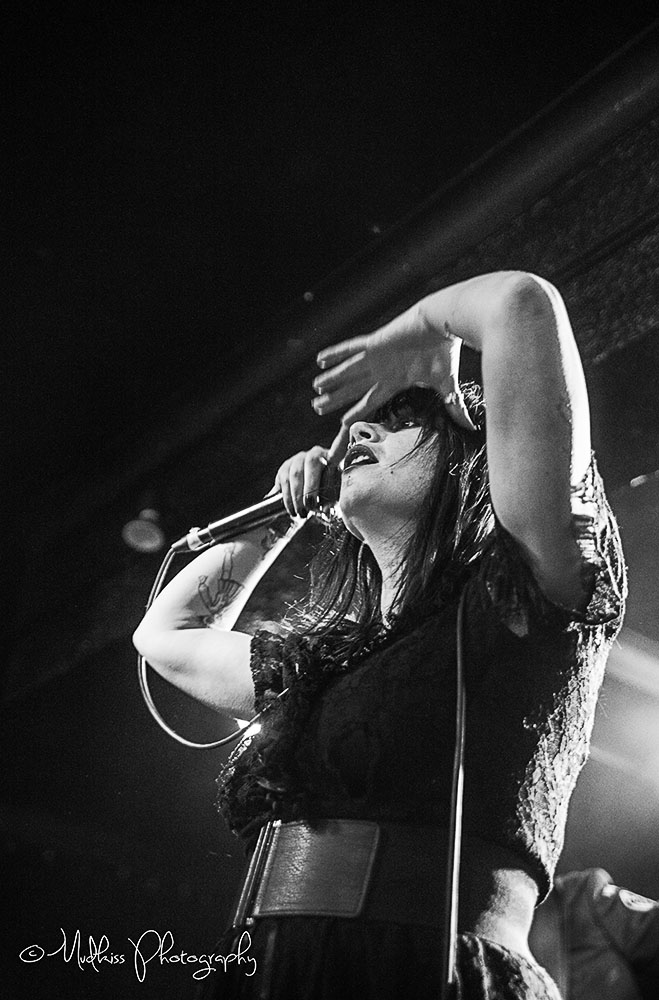 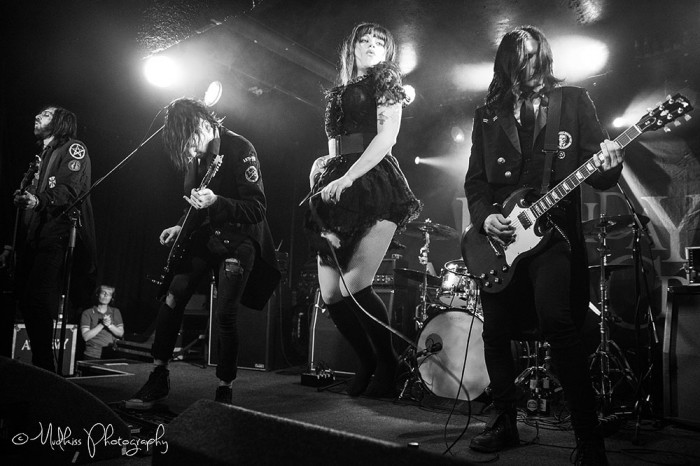 Melanie Smith (photos) and goth music virgin Clive K Hammond check out Canada’s innovative new-wave ensemble The Birthday Massacre, only to become more distracted by the darkened euphoria witnessed by their support. The pair report back from a sweaty Manchester Academy 3.

Founding member of the Romantic Movement of the 19th Century Samuel Taylor Coleridge saw Gothic architecture as “infinity made imaginable.” A thought that suggested that any constructions that relate to the East Germanic branch of the Indo-European language family could be conceivable. No notion repelled. Only championed. This conjecture followed me through my first steps into the realms of gothic music and validated Coleridge’s classic theory.

Greeting the flooding audience were headliners The Birthday Massacre (TBM). Re-branded in 2001 after a track they created, the Canadian outfit are chief contributors to the mid 90s goth movement and embrace all that is idyllic with the genre. Battering waves of distortion crunched guitars erupt amid warped spiritual melody lines and synthesized padding; and this before any live element is coloured before their audiences. Manchester’s Academy 3 housed the six piece dark wave unit, amid bewitching scenes from an extraordinarily attired audience.

Before TBM arrived, Manchester was entertained by Geelong, Australia based act The Red Paintings. The repressed euphoria expected from the evening’s main act quickly relapsed as the orchestral rock unit burningly meandered through their opening slot. A man decorated to symbolise what should only be described as Zeus’ Messenger, pranced around an imposing, tribally masked human statue; singer Trash McSweeny – himself a beacon of unorthodox delight, complete with an authentic Ushanka Russian hat and a sweaty R2D2 rucksack – capering throughout the air between drums and stage; violinist Alix Kol ruthless in her approach to bowing her now piercing instrument; all typified the ‘0 fucks given’ attitude that should be more common throughout the music we all watch.

To only describe the idiosyncratic nature of their appearance shouldn’t discredit the acute anxiety created they create through their tracks; the fluctuating samples that entangled within the discontented, brash severity concocted by the guitar – all key attributes to The Red Paintings monster. McSweeny as an orchestrator is uncontrollable. Softly muttering one moment; McSweeny would soon become maddened as The Red Paintings’ chaotic sound reached its climax. 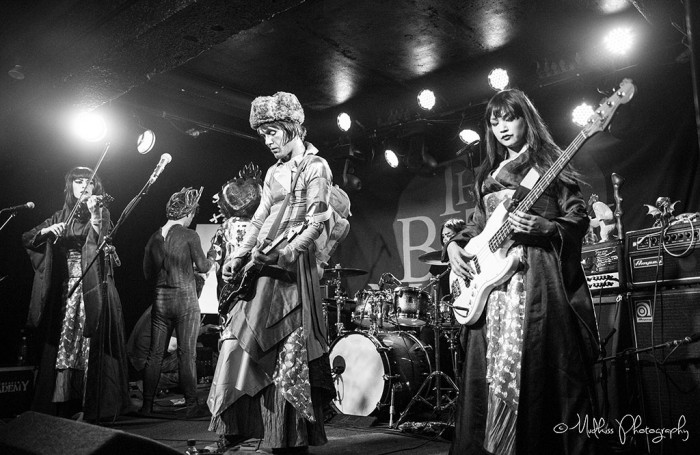 Front-woman Chibi was frantic; composing herself only when the tracks disintegrated in rounds of softening guitar and reflective analogue synth backed her. These passages portrayed her as a crushed individual, constricted against the narratives and diversity of the melody, Chibi became towering; once the 80s formulated thrash detonated; once tumult ensued. Jarring against the half-time choruses of ‘The Otherside’ and ‘Control’, the confessional undertone that struck throughout felt complimentary of the warped abrasiveness filtrating the group’s makeup. ‘Midnight’ defined it.

My own provincial self is now apologetic. I – like other parochial people – had been convinced gothic music was just make-up and long hair. I apologise. TBM and The Red Paintings stalled these damned stereotypes into extinction. A world more colourful than ever tenable had been generated. Coleridge was more than just a philosopher you know? He knew a banging genre 200 years before it even bared any of its fruits.