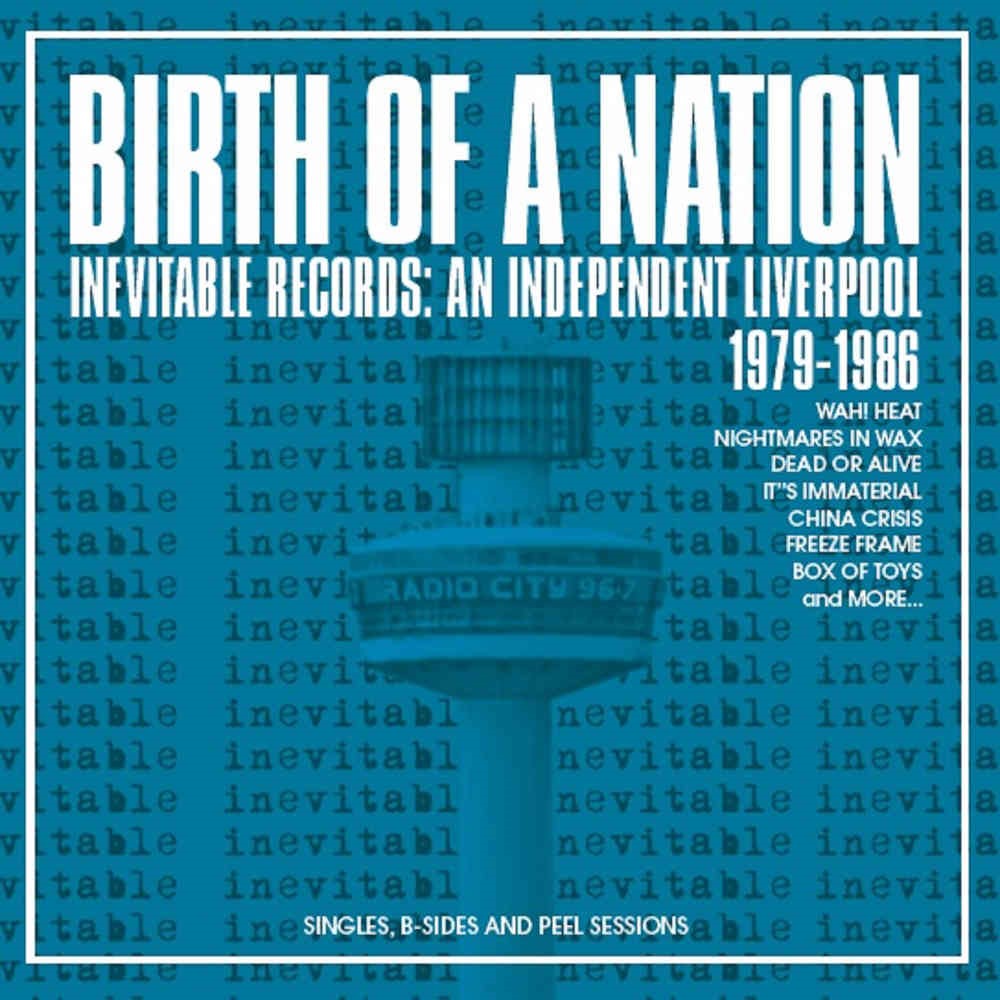 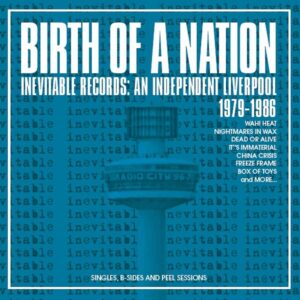 A 3CD set focussing on Liverpool’s long gone Inevitable Records, a label which was the home to the earliest material from an array of bands and artists including Wah! Heat, Nightmares In Wax, Dead Or Alive, and China Crisis.

The release is essentially the cousin of the expansive 2018 5CD boxset “Revolutionary Spirit: The Sound Of Liverpool 1976-1988”, that one came in a long form book with 50 pages of text and accompanying artwork. ‘Birth Of A Nation” is a slimmer volume, 3 CDs housed in an envelope sleeve with an 8-page booklet written by Jeremy J Lewis who formed the label alongside Pete Fulwell in 1979. Discs One and Two chronologically reflect the label output whilst Disc Three captures the artists BBC John Peel broadcast sessions.

Lewis was a familiar face in Liverpool, he had played guitar in a number of bands before he had started Amazon Studios initially based outside the city in Kirby before a move into the city centre in the early 80’s (the studio remains in this central location though is now known as Parr Street Studios).

Lewis had signed a band to CBS Records, it was this contact with a major label that sparked his interest in starting his own label; his access to local bands passing through the doors of the studio ensured he was ideally placed to get a first hand look and cherry pick the bands that piqued his interest.

The labels debut release Wah! Heat “Better Scream/Joe” came out in late 79, frontman Pete Wylie was a ‘face’ within the nascent Liverpool punk scene, a regular at Eric’s, and a member of the mythical Crucial Three alongside Ian McCulloch, and Julian Cope. Wylie may have frequented every punk gig in the city, ‘Better Scream’ however leant towards a psychedelic slant, though acted as an early indicator of the range and passion within Wylie’s vocals, the single received much critical acclaim within the UK press and also brought the band to the attention of John Peel who invited them to record their first Peel Session in the late Spring 1980, that said it pales next to the classic “Seven Minutes To Midnight”, the title is a reference to the Bulletin of the Atomic Scientists and their iconic Doomsday Clock. In 1980, in an atmosphere of increasing nuclear paranoia the Bulletin moved the clock forwards two minutes, to the eponymous seven minutes to midnight; the track itself matched Wylie’s vocal with splinters of iridescent guitar, and propulsive drums and despite the near 40 year passage of time it remains a refreshing and sadly overlooked gem. 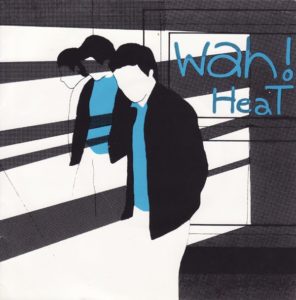 Pete Burns at this point was working behind the counter at the legendary Probe Records, when not amusing himself by terrifying customers he fronted Nightmares In Wax a proto disco/goth band, they appropriated KC & The Sunshine Band’s “That’s The Way I Like It” and morphed it into a filthy paean to muscled men in leather astride motorbikes, Burn’s semi-operatic voice a clarion call for depravity; the entire 3 track EP is included here as originally released.

This was followed up by Modern Eon “Euthenics” which was released in 1980 and then picked up in early 81’ by DinDisc, thankfully this is the original recording, a decent copy of which will currently set you back a least £10; Tim Lever provided the keyboards, a role he later took when Nightmares in Wax evolved into Dead Or Alive who released “I’m Falling” via Inevitable in late 81’ the single heading into the Indie Chart Top 20 with its swirling almost psychedelic keyboards.

Pete Wylie was also a member of Faction, as was Joe Musker who also leant his drum talents to Dead Or Alive, their self-titled debut is full of frantic vocals, mangled guitars and some off kilter piano that still sounds fresh all these years later, maybe that has something to do with the then nascent skills of one Gill Norton who was the Assistant Engineer, before later producing material for the Bunnymen, and Foo Fighters. 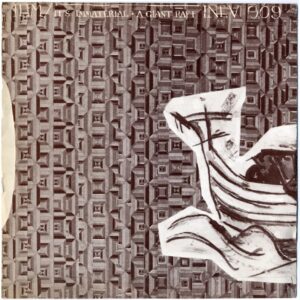 It’s Immaterial frankly deserved a hit with “A Gigantic Raft In The Philippines” – released by Inevitable Records in 1981, the band was formed by three former
members of Yachts – John Campbell, Martin Dempsey, and Henry Priestman (later The Christians), the bizarrely titled track was built around a rumbling looping bass and minimal drums, impassioned almost other room vocals wrapping around some to the point guitar work, the track was twice re-released in 1984 gaining WEA distribution, it still failed to chart. It’s Immaterial eventually reached the UK Top 20 in 1986 with the single ‘Driving Away From Home’

Disc One closes with China Crisis “African And White” which shows how Gary Daly and Eddie Lundon had progressed form being young punks around town to adopting a synthesizer and drum machine and producing a more new wave sound; the single did very well and brought the band to the attention of Virgin Records who were keen to re-release the track; the version included here is the original 7” mix that had the words ‘WAH! WHO WYLIE’ in the runout grooves, and not the awful Stock, Aitken & Waterman remix, that said SAW arguably didn’t do Dead Or Alive any harm when they departed the label for Epic/CBS Records.

Disc Two looks at what was left for Inevitable, I’d suggest they had lost their ‘big name’ artists, that said there was a plethora of talent clogging up the rehearsal rooms of Merseyside, the first of which to gain a release was Freeze Frame “Your Voice/Conversation Piece” in early 1983, a fairly whimsical pop leaning release that listening back now is clearly rooted within that whole early 80’s radio friendly vibe, and sits comfortably alongside the likes of Haircut 100; similarly with Box Of Toys who took the pace down a few notches but were able to add some distinctive sonorous vocals. 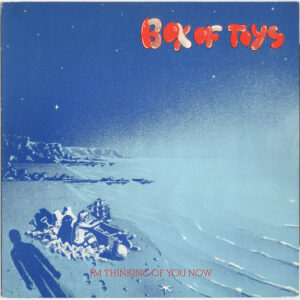 Both bands continued to record and release for Inevitable throughout the mid-80’s, its all included here; personally, there is little to get excited about, it’s all perfectly competent pop utilising the electronic innovations of the day; but that’s possibly its failing. A short walk away you would find Zulu Records who were responsible for releasing all the Pink Industry output, a band who also seized upon the ready availability of electronic instruments, however they experimented more creating at that time a unique sound that would much later be termed darkwave, and a sound that retains its ability to challenge and surprise to this date.

A real gem within the pop sheen however comes from Margox, a name adopted by local Kirby girl Margie Clarke; Clarke was drawn to Eric’s and Probe Records and linked up with a range of characters including Holly Johnson to perform her self-penned material. “Jimmy’s Grin” is the only recorded evidence of this work and wasn’t actually released as a standalone track, instead appearing on the Inevitable Records compilation “Small Hits & Near Misses / The Inevitable Compilation” Clarke later said the track was “inspired by ‘Born To Run’. . . longing to be a New Yorker! I recall hearing this in venues in Liverpool when it first appeared, its well worth a listen, Clarke has a surprisingly strong singing voice that perhaps leans a little heavily towards that other local Jayne Casey, and Siouxsie. It’s a huge shame that nothing else has ever appeared as on the evidence of this lone track Clarke could have just as easily forged a career in music as she went onto to do in in both film and TV. 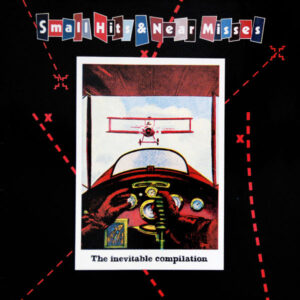 Box Of Toys collapsed, songwriter Brian Atherton continued under the name The Light who went onto release a couple of singles, they continued in the pop vein, though “Contrasting Strangers” has a certain charm about it, it’s a like grown up pop and harks back to the rich sounds of the Walker Brothers.

Disc Three is culled from the labels Peel sessions, and includes two previously unreleased Dead Or Alive session recordings, the first was broadcast in April 1981 and captures an early version of “Nowhere To Nowhere” which would see an actual release until 1982 when it was included on the “It’s Been Hours Now” EP which came out on Black Eyes Records named as a result of Pete Burns fondness of wearing jet black coloured contact lenses.

Another gem is the November 1981 session from It’s Immaterial, the version of “A Gigantic Raft” perfectly captures the twisted pop edge that the band had; a second Dead Or Alive session was recorded in March 1982, by now Wayne Hussey had joined the band which further fleshed out the depth of their sound and if you listen to his contribution within “Number Twelve” you can clearly see what he later did with The Mission, particular attention should be played to the track “Untitled” which is clearly the very large seed that later became the Mission’s clarion call “Wasteland”

What this album does is demonstrate how Inevitable and I suggest many other indie labels took on the role of cultivators, encouraging their artists to go forward, labels like Inevitable fostered raw talent often without reward other than the option to retrospectively say “we did that”.

All words by Phil Newall.