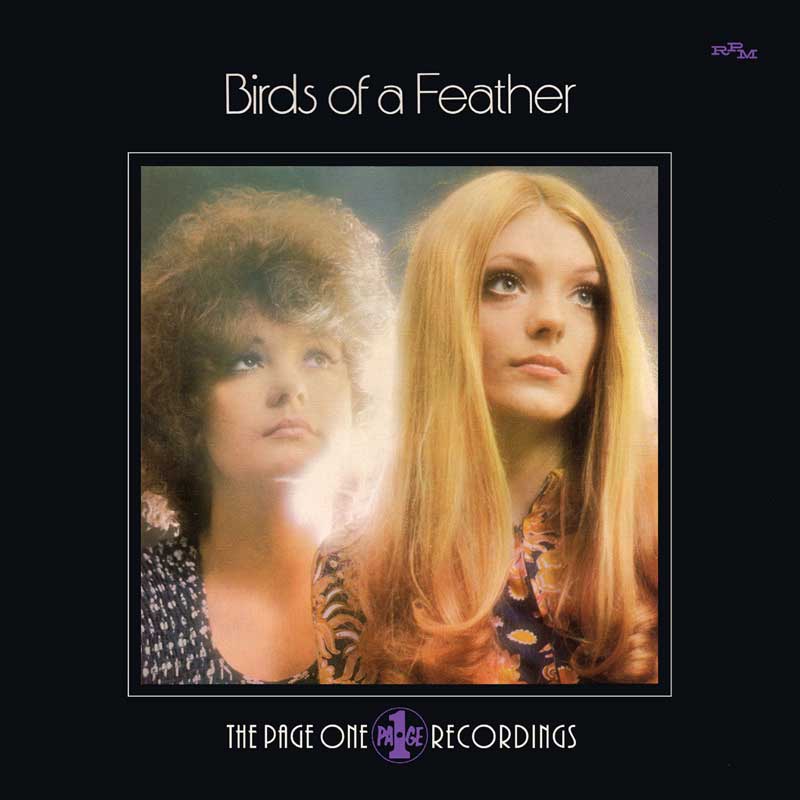 Birds Of A Feather: The Page One Recordings

First time reissue for the self-titled Birds Of A Feather album from 1970, plus the two sides of the Blacksmith Blues single that preceded it….Ian Canty sees another example of Elton John’s impressive early 70s work-rate and the offerings of the talented Chanter brood from Fulham…..

Firstly, don’t run away, it’s nothing to do with that sitcom! Doreen and Irene Chanter grew up in a musical South West London household and during the 60s joined with their male siblings Alex and Charlie (providing guitar and drums respectively) to launch their own band. Dubbed logically enough the Chanters, they entered and won an edition of the X Factor prototype Opportunity Knocks.

After that television exposure they were duly signed by CBS in 1966 and put out four singles over the next couple of years. The sisters’ soulful vocals came to the fore as they progressed, but their time at the label was not successful or particularly happy, so in 1969 the band moved over to Troggs’ manager Larry Page’s Page One imprint. After the successful audition for Page, a new name was sought for the band and the title bestowed on them was Birds Of A Feather. This audition took place at the DJM studios, which was to bring them into the orbit of one Reginald Dwight aka Elton John.

Though happy to be away from the clutches of CBS, their relationship with their new label wasn’t without its bumpy moments. Page One made it clear that they only wanted the sisters as part of the deal. Doreen and Irene were pretty annoyed at this, taking to the pages of the music press to announce they were not a duo, but a four piece band.

Despite tensions they went through with recording the album without their brothers, a Caleb Quaye led-band featuring keyboard wiz Rick Wakeman among others replacing them. For these sessions they were produced by future studio hotshot Stuart Epps. Elton John and Bernie Taupin, who had befriended the sisters, provided four songs into the bargain (keeping things “in house” with Elton being on Page One’s sister label DJM, also it was envisaged this would help his and Taupin’s profile as “songsmiths for hire”). Not to be outdone, Doreen was a composer of no small merit too and apart from the Elton songs and Blues/R&B standards, she wrote half of the album herself.

To be honest, though they album tracks are well put together and faultlessly arranged, the big band settings do threaten to swamp the sisters on occasion (like on opening track Take Me To The Pilot, though it’s a pleasant enough listening). When they lock in their dual vocals sometimes they sound like backing singers on their own record, which is unfair as individually they had really good voices and were real talents. One wonders if perhaps the simpler approach with their brothers would have brought forth more satisfying results. The quality of the two pre-LP bonus single tracks seem to add weight to the argument, with both songs being catchy and enjoyable. They got the balance just right here between music and vocals too.

Nevertheless the Birds fly on some of the album and the sisters don’t turn anything other than classy vocal performances throughout. They actually ended up on Top Of The Pops with the Bluesy rave-up All God’s Children Got Soul – this publicity and some great freaky guitar failed to push BOAF along to further success, even though the TV appearance was timed to coincide with the album’s release. The Doreen-penned Funk influenced Leaving The Ghetto was a highpoint of the LP, neat Hammond organ, great vocals and a solid pre-Disco thump, very danceable. What Is Life shows how well the sisters could deal with a Soul ballad and Get It Together has some pumping piano that compliments the Funky treatment of the song well.

As to why this record wasn’t successful, I can only speculate. Perhaps truncating the Chanters band to ostensibly a duo lost focus and didn’t give the general public much of an image to buy into. Though family bands were seldom “cool” they at least had a dynamic that Birds Of A Feather could have used, because with their low profile and many cover versions it was perhaps difficult for the general public to get a handle on exactly where they were coming from? For whatever reasons, the album or single didn’t make much of a mark, despite the touches of quality.

After the album struggled the sisters put out 3 further singles on DJM and also one under the pseudonym of the Electric Dolls. When these offerings also flopped they moved onto a successful career as backing vocalists, singing with Roxy Music and Pink Floyd among many others. Doreen kept her songwriting hand in, penning the hit Star for Kiki Dee in the 80s. Ironically this was also used as the theme to a relaunched version of Opportunity Knocks, which had featured the Chanters all those years before.

Putting all concerns aside for a moment, the album consists of elegantly produced, beautifully sung Gospel-influenced Pop. For a band born and raised in Fulham, Birds Of A Feather could knock out quality R & B and stand shoulder to shoulder with their US counterparts. That their efforts remained unloved by the general public could be put down to a number of reasons, some of which I have explored above, but it wasn’t due to any failings on their part. Including their one album along with the great Blacksmith’s Blues single, there’s plenty of diverting work on show on the Page One Recordings.