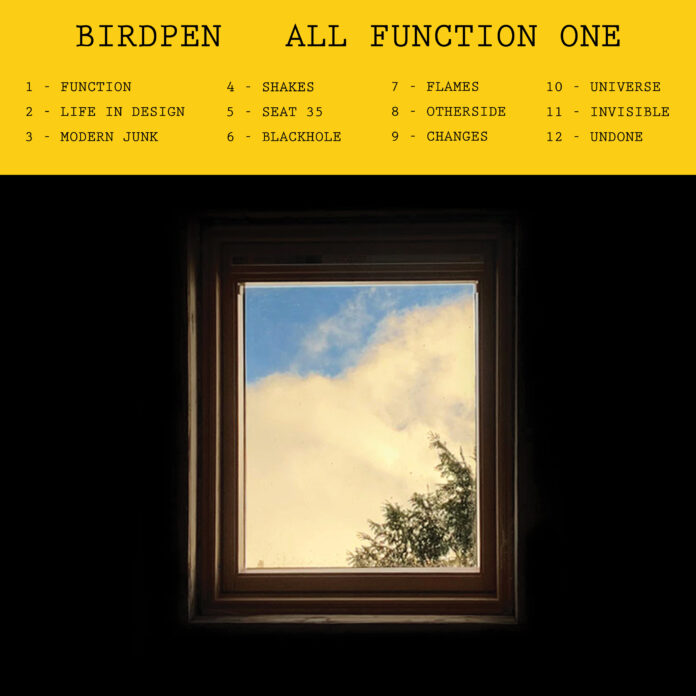 BirdPen bring us their sixth album and tap into a wide spectrum of atmospheric sounds and bleak imagery to deliver a body of work which may well be more relevant than they could ever have imagined when it was first conceived. All Function One proves to be an album symbolic of our time and may just be the one to really unlock their potential to a much bigger audience.

BirdPen is a Southampton based alternative electronic rock band formed in 2003 by singer/songwriter Dave Pen (also a singer and guitarist in Archive) and guitarist/keyboardist Mike Bird. As the band now approach their sixth studio album with all the experience that such a period of longevity brings with it, alongside their other projects, it’s fair to say that this description belies the wide sonic soundscapes that they have developed over the years for their ever-expanding fanbase.

With a sound and vibe that have drawn comparisons with the likes of Wire, My Bloody Valentine and Radiohead amongst many others, BirdPen bring together a distinctive blend of distorted psychedelic guitars, strong basslines, experimental electronica and Krautrock, often creating cinematic and uplifting moods, albeit with a defined narrative to deliver. And having received a nomination for Best European Independent Album at the IMPALA Awards for a previous album, Global Lows, there is a clear indication that this is a band on the right path.

The question remained, as the band ventured into the studios in early 2020 and stories of a virus started to dominate the news, what would BirdPen make out of all this potential? Ironically the central theme that dominated their song-writing was about people who spent most of their lives indoors due to a fear of the outside world. As the recordings came together and moved towards mixing in March 2020, there was an emerging recognition that this fear and sense of isolation was now becoming a reality not only at home but across the globe. So with this unexpected twist, I was keen to explore what BirdPen had produced in such character-defining times.

Opening song, and first single from the album, Function really sets out the underlying tone of the album with its slow build and staccato lyric. This allowed me to absorb every line as it makes a statement of the present times focused on vulnerability, remoteness and distortion. Backed by atmospheric strings, with Raphaele Germser on viola, the song leads towards a crescendo as the frenetic drum pattern comes to quite an abrupt end. They met Raphaele on tour as part of a band that supported BirdPen, and it seems she was to prove a constant companion throughout the album and to very good effect.

Life In Design is dominated by a jangly guitar sound and a dreamy harmonic chorus line as it focuses on a view of those who always extol the virtues and trappings of their dream life whilst not recognising their slavery to the modern treadmill of formulated life. Similarly, Modern Junk talks of the cold, fake and faceless side of society but this time underpinned with a strong rhythmic beat and a very danceable vibe. In common with previous albums, BirdPen have once again conveyed some disheartening messages sound-tracked by vibrant and upbeat melodic tones.

Shakes is acoustic-based and wrapped with a sense of desperation and lack of trust within the vocal. This is further enhanced through the melancholic string arrangement which brings such a beautiful resonance to the song. This tone continues through a flight to nowhere strapped into Seat 35, dominated by a drum and bass rhythm which reminds me very much of some of Joy Division’s most desolate moments as it gradually builds through atmospheric layers.

Blackhole forms the very dark centre of the album with its psychedelic leanings and its stark message of “staring into nothing”. And then, in what seems a rare sense of positivity, Flames is ignited with a heady mixture of electronica, staccato vocal and guitar distortion all of which evolves into an almost hypnotic beat alongside swirling chorus lines.

Otherside is a song riddled with darkness and an ethereal rhythm which conveys a feeling of desolation and resignation which you might see in someone with that fear of life beyond their front door. Changes takes things a stage further as an almost sinister and monotone vocal alludes to a total self-reliance on technology to keep us all safe. The threatening tone is heightened by the underlying synth and drum patterns.

Universe lightens the mood somewhat with its acoustic base and soaring melancholic strings. These strings are also used to great effect through Invisible as the chorus builds a sense of euphoria with a more positive message that there is a world out there for us all to find. But then Undone closes the album with a haunting vocal which conveys a sense of searching for something that may not be attainable.

All Function One is very much an album symbolic of its time and place as we all continue to face challenges in our day to day lives. Its narrative speaks clearly of isolation, loneliness, paranoia, the impact of a modern cyber life and a sense of emotional turmoil that I am sure most of us will have experienced over recent months. BirdPen really have tapped into a wide spectrum of atmospheric sounds and bleak imagery to convey a sense of fear and anxiety whilst also recognising there may be some hope beyond our current confines.

Strangely it appears that BirdPen are more widely acknowledged across the European continent than in their own backyard in the UK so there is still much to unlock from their undoubted potential. It may be that All Function One is just the album to do that and you are well-advised to have a listen.