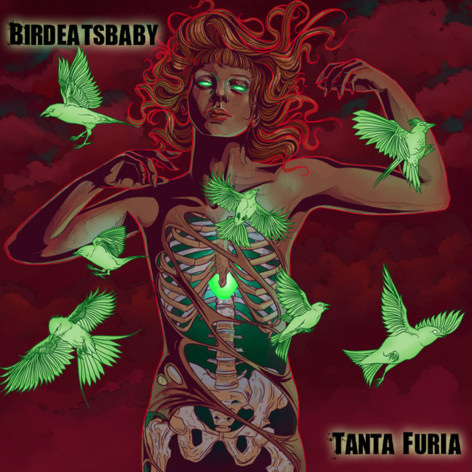 A band who have “hints of everyone from ELO to Marilyn Manson” according to one of the glossy music mags, is enough of a broad description to be classed as a catch all. They’ve also been tagged with the gothic nightmare / cabaret style art rock labels, which is enough to make Birdeatsbaby an fascinating proposition.

A band too who prove ‘hard to pigeonhole’ in the same way as a band such as  The Moulettes who’ve been courted by all manner of followers from the folk set to the prog audience with their musical expressions and explorations. Don’t be surprised if you see reviews of ‘Tant Furia’ in the glossy rock mags then.

Their fourth studio release confirms their position as a band with an originality in combining orchestral and intricate arrangements with a sense of the absurb and splashes of the weird. A musical oddity but all the better for their vaguely avant garde conceptions. And so it goes. “Now you’re going to see me as I am” sings Mishkin Fitzgerald in the opening ‘In Spite Of You’, with talk of love locked inside a cage and sweeping strings add a theatrical drama to proceedings. It’s one step from the epic sort of diet served up in overblown swathes of operatic rock by MeatLoaf and Jim Steinman.

‘Scars’ has a similar string swept and windswept openness dipping in and out of a sixties vibe,  adding to the quirky and strange quaintness which starts to emerge as  the main strength of ‘Tanta Furia’.  Darker moments are taken care of in ‘Temple’, a heavy groove filled guitar rock track fest and an angry defiant  sound developed before the lush strings and vocal kicks in on ‘Spit’ and up to the  more poignant and bleak album closer ‘Eulogy’. The latter all sparse and deceptively sweet sounding at times, disguising a desolate narrative.  Dreaming of coming clean but keeping the secret safe under lock and key – all very cloak and daggers and a summation of their view of life’s highs and lows.

A trip through ‘Tanta Furia’ with Birdeatsbaby confirms their indie noir offerings provide evidence to authenticate the claim that that they belong amongst  the shoal of musical beasts whose mission remains to resolutely swim against the tide.

Watch the video of ‘Temple’ from the album here: