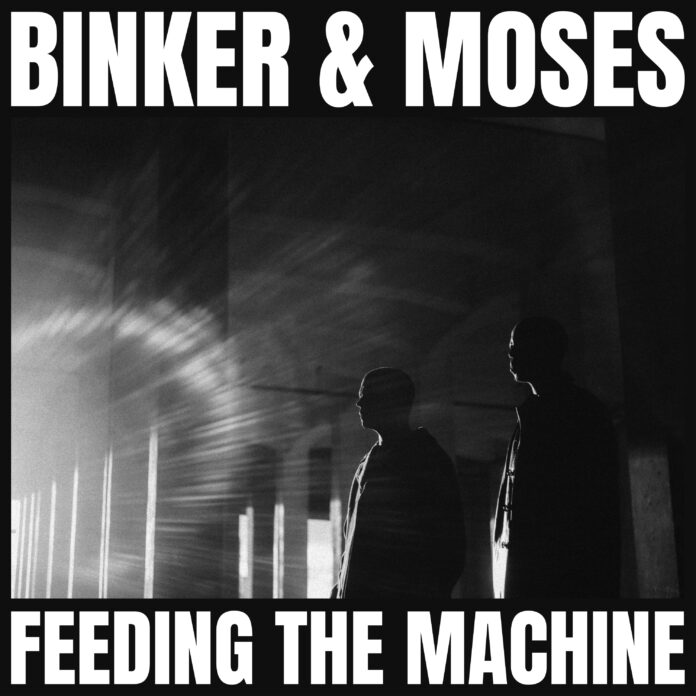 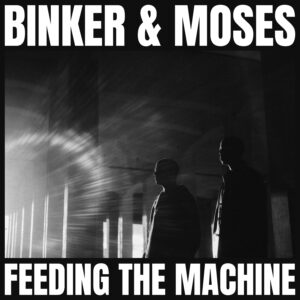 The Darklands is a fantastical and frightening setting in Marlon James’s brilliant novel, Black Leopard, Red Wolf. It is a dense forest where one becomes bewitched by spells and wicked magic until a point is reached where the boundaries between reality and dream worlds are completely blurred. The first time I listened to Feeding The Machine, the new album by Binker & Moses, I felt as though I had been spirited to The Darklands. Such a heady intensity. Such propulsive kineticism.

Binker Golding and Moses Boyd introduced themselves to the world in 2015 with their MOBO award-winning debut Dem Ones. This was followed by a second album, Journey To The Mountain Of Forever, in 2017, before the duo took the decision to concentrate on their own projects. These have reaped lavish acclaim, with Boyd’s 2020 album, Dark Matter, nominated for the Mercury Prize. Twelve months earlier, Golding lifted the Jazz Instrumentalist of the Year Award for his quartet’s album, Abstractions Of Reality Past And Incredible Feathers. The time has now come for them to reunite. However, they are absolutely not re-treading old ground.

To begin, they have introduced a whole new dimension to their work by collaborating with electronic musician and composer, Max Luthert. His mesmerising loops and incredible ability to distort acoustic sound takes Feeding The Machine into a whole new territory. There are ambient textures here and tapestries of electronica that weren’t present on the duo’s previous output. Augmenting the sonic palette further is the presence of the legendary producer Hugh Padgham behind the desk who, along with the album’s co-producer Darrel Sheinman, brings a touch of mastery. Taken holistically, all of the individuals combine to form a formidable force.

Boyd is quoted as saying that he felt the duo “needed some more experience under our belt to attempt a record like this”. That makes absolute sense, for this is a collection of such complexity that it is unfeasible to think that it could emerge on a first or second album. In many ways, Feeding The Machine reminds me of the Bell Orchestre album, House Music, which was released last year. Binker and Moses entered the studio to record this album with nothing prepared or pre-planned. The recording process was to be hugely experimental and improvisational. Requiring a level of experience and self-belief that comes from previous success, that’s an approach that would be very difficult to apply on a debut album. Irrespective of experience, it’s a hugely risky approach. There is much that can go wrong. However, it is one that has undoubtedly paid off for Binker and Moses here, because the spontaneity of the moment has resulted in the creation of a quite stunning record.

In describing this album, let me draw another comparison from 2021. Feeding The Machine shares the same hypnotic, bewitching quality as Promises, that tour de force by Floating Points, Pharoah Sanders and the London Symphony Orchestra. It possesses that same capacity to hold you enrapt for the entire duration of the album. The needle drops and you are immediately spellbound by virtue of Luthert’s repeating four-note loop at the beginning of album opener, Asynchronous Intervals. Asynchronous. It’s a fitting title for these non-concurrent notes which combine to create an edgy feel. Golding’s saxophone introduces itself, soaring celestially and bringing the vibe of hot summer nights in the heart of the city. Meantime, Boyd is rolling all over his tom-toms. It’s a piece that seems fixed in space and time even whilst it propels itself forward.

Binker and Moses seem to have applied the Ronseal principle when naming their songs on Feeding The Machine. The album’s third track is entitled Accelerometer Overdose and, like the opener, it describes the action quite perfectly. An accelerometer is an instrument for measuring the acceleration of a moving body. No wonder it’s overdosing, given the lightning rapidity of Boyd’s quicksilver paws and Golding’s notes. This particular track, however, takes its time to get to that point. It is a slow burner, building gradually and steadily. Luthert expands upon the sound by taking Golding’s wailing sax parts and looping them back. It creates an overwhelming sonic maelstrom, once again a vortex that is impossible to escape from. But who would want to?

On Feed Infinite, there is the joy of hearing the rich tones of Golding’s sax punch through the ether whilst, underneath, Luthert sets out bleeping synth notes. They combine artfully. There is some respite when After The Machine Settles gets going. This begins as an electronic treat, glitch and jittery and distant like Burial. If you enter Feeding The Machine at this point, you will assume it’s an ambient album. Three minutes in and your mind is changed as both Binker and Moses come crashing into the room. Golding’s sax is joyous and soaring, whilst Boyd’s goes at the kit with incredible purpose.

The album’s closer, Because Because, brings even more diversity. It’s introduced by a deep baritone sound. I can’t be sure whether it’s Golding on a tuba or a bassoon or whether Luthert is playing tricks on us. The music morphs into something dream-like and entrancing, featuring an instrument that actually sounds like a bagpipe. Halfway through, the track becomes intensely frenzied and it feels like the horns are locked in battle, furiously warring with each other. Towards the end, the warriors collapse in exhaustion. The baritone sound is all that remains.

Feeding The Machine is an incredibly intense experience. Akin to a tornado, it’s an album that sucks you deep into its heart and sweeps you skywards. At times smouldering and fierce, occasionally thoughtful and reflective, it keeps you enrapt throughout. Binker and Moses are experienced enough now to understand how to play with the light and the shade and they utilise both brilliantly. Just like The Darklands in James’s novel, you will be utterly bewitched.