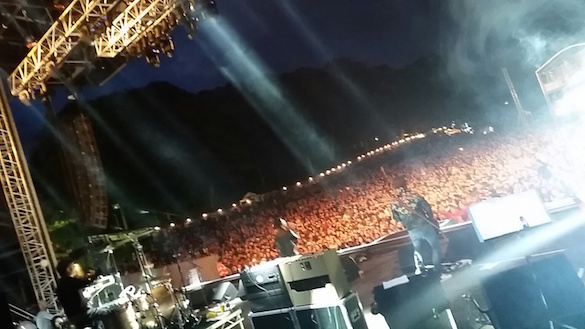 Photo of Shed 7 above © John Robb

This is quite odd.

Friday night headliners Shed 7 have hit a first gear with their cover of Brooooce’s Born To Run. What should have sounded like mice tackling a man’s work sounds powerful and pumped up like the young Bruce fresh out of his riff gym.

For far too long considered the runts of the Britpop thing way back in the eighties, Shed 7 have grown up into a pretty good rock n roll band. I don’t think they even realise it themselves as they still do a fine line in self depreciation and modesty and blink with disbelief at the the 16 000 rain soaked folk waiting to welcome them home to their biggest Yorkshire gig of their career.

The York based band stumbled into the Britpop scene just before it kicked off all those years ago. I remember seeing them play an In The City new bands show in Manchester to about 30 people in the early nineties with frontman Rick Witter waving a plastic doll around. There was a touch of the Smiths to their jangle pop and a hint of ruffian pop with a twist of big melody about them even then. They were even considered to be the better option by some than those rude Gallaghers who had not been invited to the party and were the bookies faves in the Britpop race before the Oasis combo juggernaut overtook them.

But lets not write them off that easily- they still smash and grabbed loads of hits before sliding away. When they retuned they cannily toured just the right amount of times and have found themselves one of the biggest bands from those Britpop times still out there. They have the right mix of everyman modesty and, in Rick Witter, skinny rock star charisma to cut it and those songs are dead catchy. They have grown into themselves as well and fully look like a stadium band with crowd singalongs and that personal touch that bounces to the back of the field.

Shed 7 are headlining a varied day of music at the annual Bingley music event that has been going from strength to strength and is one of a clutch of northern festivals that braves the weather to celebrate the culture in the rainswept norf.

Council backed, this is a great enterprise and puts Bradford and Bingley firmly on the map. This is one of those heartlands of music fans- the people who will sing and dance with pure joy for any style with a broadminded enthusiasm whether its the brilliantly twisted R and B pop of the charismatic MNEK with his joyous multi-storey flattop hair cut and really cool off kilter guitar twisting the modern pop into frankly far trippier spaces than it was meant be. They also are wrapped up in the plaintive and emotional late addition to the bill of Dave McCabe of The Zutons and Ian Skelly of the Coral and their tribute to label boss Alan Wills who died earlier this year after a cycle accident in his hometown of Liverpool.

The Coral have long been big faves at LTW and their Love strewn psych sprinkled garage rock shuffle has a certain dayglo magic to it whilst the Zutons crafted great pop songs like Valerie which has become one of the most loved songs of the period.

Both bands were key players in that Merseyside scene of a decade or so back- a scene vigerously promoted by the late Alan Wills and as the pair of them play their songs for their fallen comrade it’s a powful and poignent moment.

Post gig Ian Skelly locks me into one of those brilliant conversations about rock nroll- that deep trench of music love with the magic dust names coming thick and fast- from your favourite Beefheart moment, to the greatest Beatles solo album to the genius of Ringo Starr’s drumming to our mutual love of the Doors, Sly Stone, George Clinton and who is the greatest band to trip to- I love those kind of conversations- music freaks locked into the bright headlights of the magic stuff. Dave joins in and the talk gets deep into the mystic scally groove- it’s great, heady stuff- maybe they should just chat the chat on the stage!

The Selecter are the perfect festival band- these 2 tone classics have been honed to perfection over the years and yet still sound fresh and powerful and they just glow with the drilled perfection of a band that knows how to make you dance- watching bands like this is an education and Pauline Black still looks fab as she shares the lead vocals with Gaps. Dressed immaculately and with the ever present perfect hat Pauline and the band must be the sharpest band on the circuit in every sense of the word.

Gaz Coombes is one of the great British songwriters- I loved Supergrass and if they never made the stadiums it’s only because they were never ruthless enough to force it through. Nowadays, out on the circuit as a solo act, Gaz still has that perfect pop voice that is full of wonder and melody and overcomes some sound problems to build the set up to a crescendo that fully underlines his credentials outside the band that made him famous.

By the time Shed 7 come on the chants of ‘Yorkshire’ and Arctic Monkeys singalongs have reached fever pitch in a quaint regional celebration that everyone needs now and then whilst Shed 7 headline the opening day perfectly.