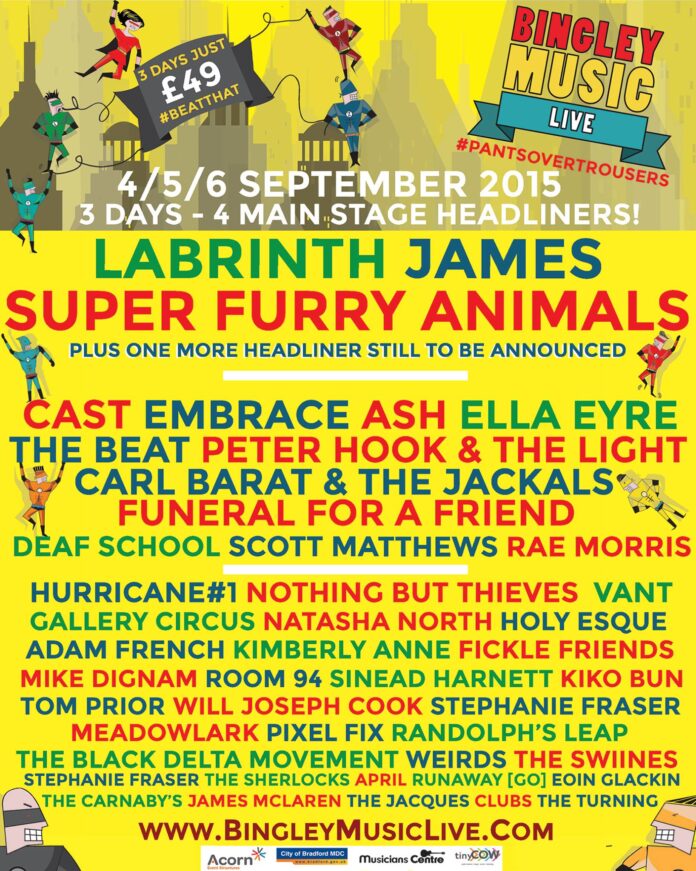 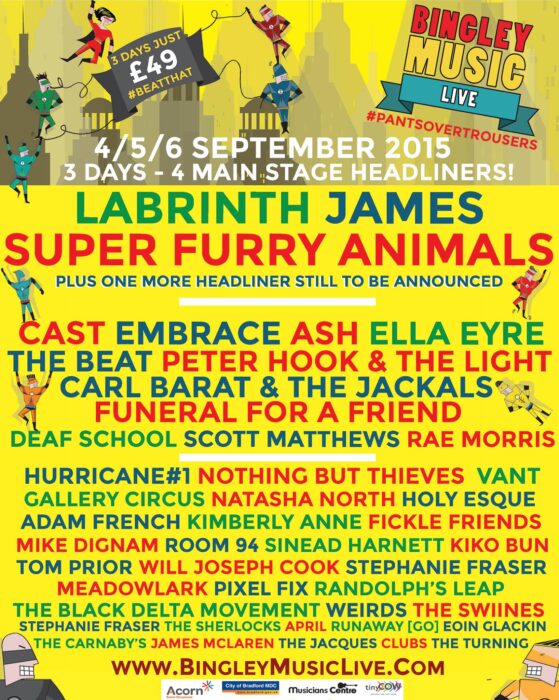 It’s coming around to festival time again and we are once again heading out to cover Bingley Music Live. We defy anyone to find a greater value for money, the line up has been revealed and tickets are now on sale. Check out last years review here:

Bingley Music Live 2015 looks set to be a fantastic festival, packed full with some of the biggest names in music, in addition to new and undiscovered musical talent. Just take a look at the headliners, you can tell there is a real treat in store.

For starters you have Labrinth, the massively popular multi-instrumentalists, who spawned three of the biggest hits of the last few years; ‘Express Yourself’, ‘Earthquake’ and ‘Beneath Your Beautiful’. Next up is James, arguably one of the biggest bands to spawn out of the Madchester scene. I, for one, can’t wait to be bopping along to ‘Sometimes’ as well as their impressive recent hit, ‘Moving On’ (and, of course, who doesn’t love a bit of ‘Sit Down?!)

Last but not least, you’ve got the recently reformed and utterly amazing Super Furry Animals. Set to play some of the biggest festivals in the world this summer, including Glastonbury, you can be sure that this is going to be a special performance to a band that has been hailed as ‘the most important band of the last 15 years’ by NME. “Super Furry Animals, who formed in 1993, have recorded nine albums. They are probably best known for singles, such as ‘Rings Around the World’, the Paul McCartney and Stevie Wonder inspired ‘Juxtaposed with U’, ‘Phantom Power’, ‘Radiator’ and ‘If You Don’t Want Me To Destroy You’. Leading American music magazine Billboard also heaped praise declaring the band as, “One of the most imaginative bands of our time”.

But there’s a veritable feast of other top quality acts too. Libertines front man and lead guitarist Carl Barat will be bringing his Jackals to the party, while Peter Hook and the Light will be playing the hits of New Order and Joy Division. On top of all that you’ve got the likes of Ash, Funeral for a Friend, Embrace, Cast, Ella Eyre, Rae Morris, and even ska legends The Beat. Remember their hits … ‘Can’t Get Used To Losing You” and “Mirror In The Bathroom”.

Liverpool cult band Deaf School will be making an appearance on the Discovery Stage. “The band has been together for decades and there may never have been acts like Blur without the influence of Deaf School. The band includes the wife of Madness star Suggs and Clive Langer – the man behind the production desk of all the hits of Madness and Dexy’s Midnight Runners as well as clocking up international hits with artists like Elvis Costello, David Bowie and Mick Jagger to name just a few.”

Discover some new music you might not have had the pleasure of before, with the likes of Kimberly Anne, The Sherlocks, The Turning, Rae Morris, Scott Matthews. Fickle Friends, Pixel Fix, Meadow Lark, Adam French, The Black Delta Movement, Weirds plus lots more. “True to mantras of ‘next year’s talent today’ and ‘your favourite new bands’, the Discovery Stage will continue this commitment that saw last year’s second stage give birth to acts like Prides, Port Isla, The Wytches, Neon Waltz, Woman’s Hour who have all gone on to great success.”

And if you thought it couldn’t get better than that, hold on to your hats. The three-day festival, which runs from 4-6 September, costs just £49 for an adult weekend ticket and £34 for a child ticket, with options to pay in installments. Bingley Music Live Artist Booker, Lee O’Hanlon, said, “I challenge anyone to find a better three day festival with such strength in depth for £49 anywhere in the country.

With more announcements yet to come, including a co-headliner, be sure to snap your tickets up while you still can.

All words James Lowther. More writing by James on Louder Than War can be found at his author’s archive.