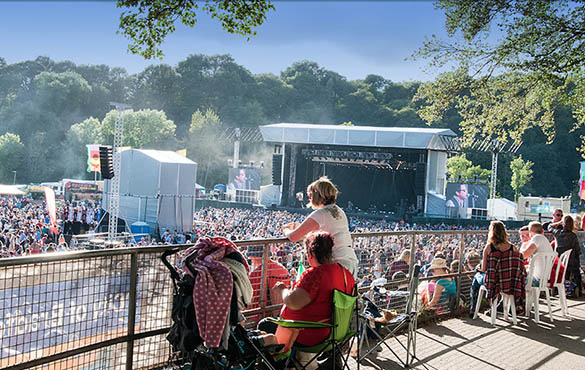 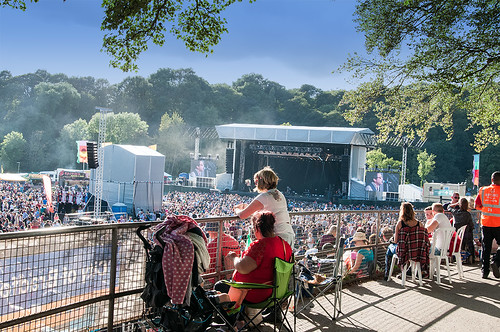 Bingley Music Live is a family festival in Bradford’s Myrtle Park, it has something to suit all ages, with various genres of music. All tied up with a friendly atmosphere – even the security are relaxed and sociable. It must be the cheapest festival in the UK at £40 for the weekend, so incredible value for money.

The main stage tends to have more established artists performing whilst the second stage are the bands to watch out for. Although I think this year some of the second stage bands should have swapped places with the main stage. I always enjoy a trip to the smaller stage, and I had some on my check them out list. 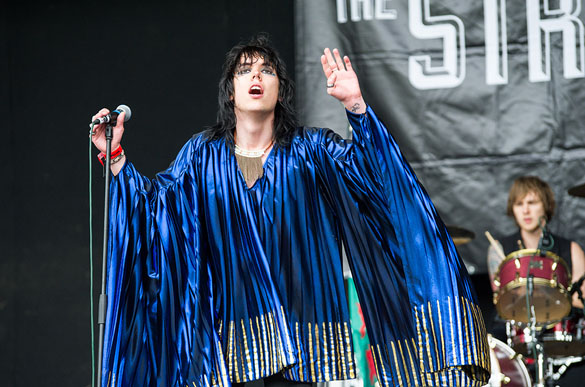 Friday: One of my favourite rock’n’roll bands The Struts, returned this year as a last minute replacement, to open the Festival. Last year they were virtually an unknown band playing the smaller stage, but potential for greater things was apparent. Recently they supported The Rolling Stones and unleashed their superb debut album, so they are getting a lot of media attention. They kicked off proceedings on the main stage, just as it began to lash down with rain at 4pm. Singer Luke Spiller looked every inch the rock star, in an electric blue satin 70’s inspired flowing cape. And how they set the standard for the day, which in my humble opinion was hard to beat.

Woman’s Hour were definitely on my radar to photograph and I managed to get a few shots of the beautiful music coming from the second stage with other bands such as Prides, and We Are Catchers. Bolting over to the main stage we had an acoustic performance (acoustic guitar and bongos) and a bit of cheeky banter from Dave McCabe (The Zutons) and Ian Skelly (The Coral) – dedicated to Alan Wills (Deltasonic Record label founder) who tragically died in May after a road accident. 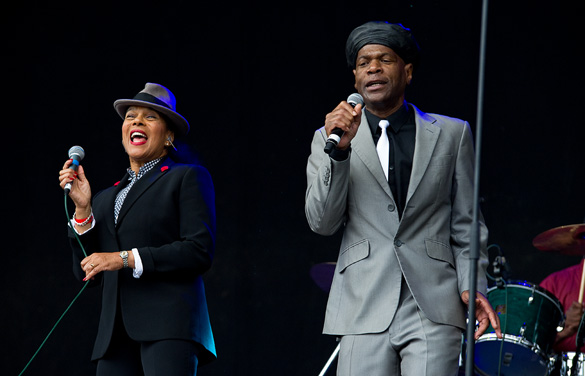 The mighty 2 -tone Ska band The Selecter featuring Pauline Black on vocals, belting out the hits on the main stage. Down at the second stage at 7pm we had Champs, a new name to me, but they were gathering a lot of interest, with their beautiful vocal folk -pop range. Singer and producer MNEK was a massive hit with the younger elements of the festival and screams, whoops and cheers were sprinkled through his set. 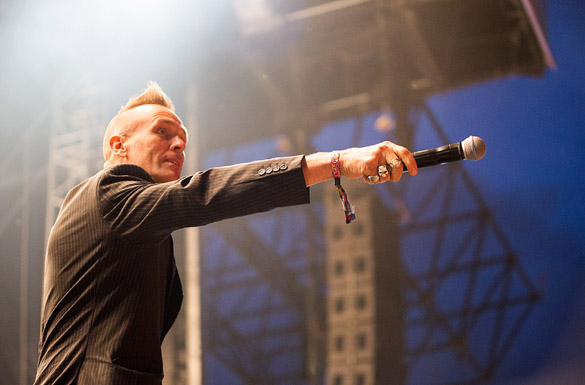 We saw our very own John Robb, introducing Gaz Coombes as one of the best songwriters in the UK. Heading back over to the second stage for their final band it was the popular Eliza & The Bear. Finally it was the turn of 90’s indie boys Shed Seven, who were given a big cheer by the welcoming crowd, and the pilot light was fully ignited. My flame was slowly diminishing so I headed back to the hotel to chill out and plan for the next day.

Saturday: The sun is shining on Bingley today, as powerful rock band The Barmines open the main stage around lunchtime. Yes, this is more like it ….

More on the main stage were – Avec Sans, a two piece electro pop band from London, with some deliciously sunny tunes. The young but self assured singer John Lennon McCullagh and for the first time with a band The Escorts, and solo artist Nick Mulvey who told us stories through his chilled out acoustic song set. 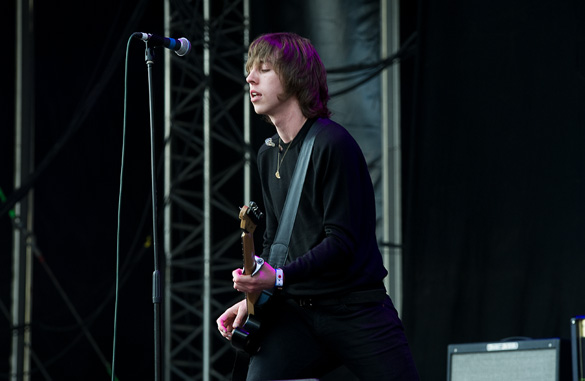 To liven the party up we had an explosive set from Llandudno based Catfish & The Bottlemen who can do no wrong at the moment and seem to be everywhere. Bipolar Sunshine another band doing the rounds of the festival circuit this year, brought some colour to the stage, and his charming persona, culminating in some audience participation down at the front. Flame haired London based Jess Glynne belted out the pop numbers to an appreciative crowd. The Strypes one of my favourite R&B bands were incredible and have really come on a lot since I saw them in February at Academy II. Gorgon City the London producers Matt & Kye, played their electro club music. A long session of Ultimate Power DJ’s gave us hard working photographers some respite before we picked up our gear again.

Over at the second stage – Tropical Contact went down a storm (its apparently one of their last ever gigs) the new talent at the second stage, include The Mispers, Warme, Bridie Jackson & The Arbour, the much-loved Music 6 favourites, Bird To Beast from Lancashire. We witnessed the incredible singing voice of Emma Garrett, Britney Spears younger sister (not really) Esther Turner, who is tipped for big things. Other bands who played to a packed out crowd were Dexters and Young Kato. Headlining the second stage was Natasha North, who I unfortunately missed. It’s been fantastic to see so many female artists/ female fronted bands considered for this festival.

Example closed the day with their massive hits and equally massive light show, a triumphant success with the crowd. What a great way to end the night, with streamers, and an explosion of lights. 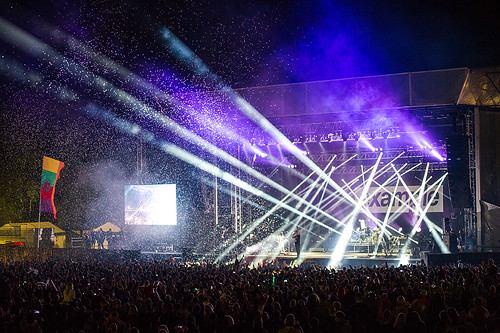 Sunday: It’s 11.50am down at the main stage and Down Reno open the show with their folk/pop sounds, whilst people trickle their way into the main area, still dazed from yesterday’s shenanigans. Solo artist Charlie Cunningham played us some mellow tunes in the sun. Night Engine tried to raise the spirit of David Bowie with their half hour set. Music wizard D/C entertained with some electro ballads fusing jazz and soul. Etta Bond, certainly looked the part, great to photograph, but come on love, it’s not cool to swear in front of young kids, talk sex and drugs, then call people boring. Needless to say she got booed off the stage – less said the better! One for the teenage fan club Chloe Howl is another matter altogether, looked brilliant, great attitude and sounded amazing. 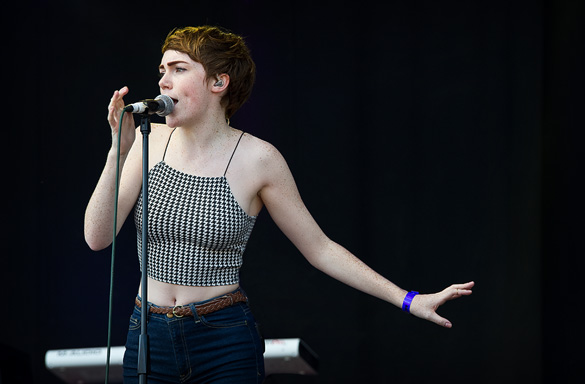 Simon and Oscar (Ocean Colour Scene) gave us some acoustic numbers and we all had a little sing-along from the ramp. It’s amazing how many songs you actually know from their back catalogue, without even buying them. Finally it was the turn of chart topping record producer, artist Shahid Khan aka Naughty Boy behind the large decorative deck, hip hop, rap, and R&B music thrilled the crowd.

Let’s not forget the second stage; this area was rather packed today, with happy smiling faces, picnic mats laid out, deck chairs, and lots of exciting new bands on offer. It’s where you land if you want to discover new music, and we had – Happy Daggers, The Sherlocks, the band tipped for greater things Port Isla, The Voice contestant Georgia Harrup, Ramona Flowers, Neon Waltz, the incredible guitar band The Wytches (another highlight for me), the beautiful Kyla La Grange mesmerised us all with her uplifting set. And finally The South (the other half of The Beautiful South) closed the second stage set, but we had to wait 15 minutes for the privilege as they had sound problems.

The electronic duo Pet Shop Boys closed the festival with an absolutely epic film and light show, plus a thrilling set. From up inside the soundboard second tier tower I shot photos for the first four songs, then off to watch the whole show from the ramp. The set culminated in a massive explosion, and that’s another Bingley festival over for this year. Bring on next year! 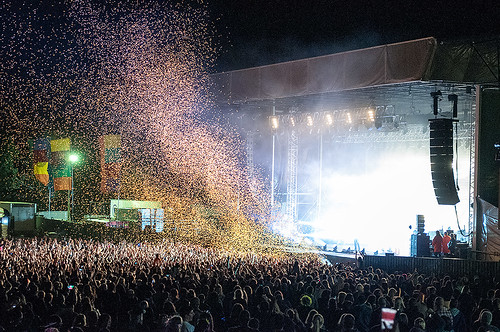 All words and photos by Melanie Smith – www.mudkissphotography.co.uk You can check out the full gallery here