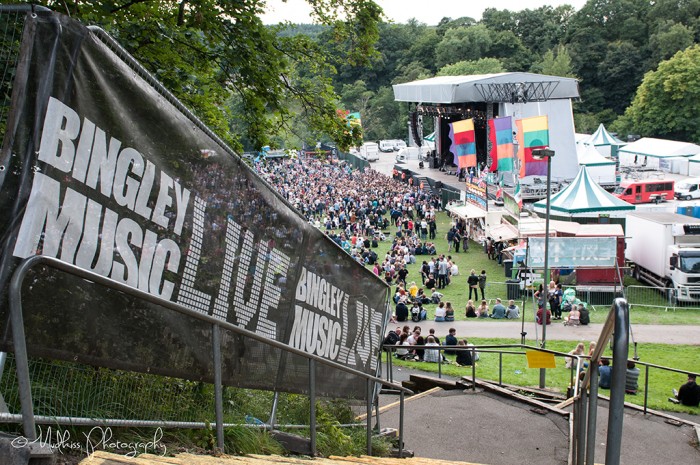 Louder Than War photographer Melanie Smith headed down to the Annual Bingley  Music  Live festival for her final festival of the year. She captured the action for three days where she saw the likes of James, Labrinth and Super Furry Animals headlining. Plus other established artists such as Cast, Ella Eyre, Peter Hook & The Light, Ash, Carl Barat & The Jackals, and Embrace, plus loads more artists/bands, read on…

This is my third year at this family friendly festival in Myrtle Park, Bingley Bradford. It’s hailed as one of the best value festivals for your money. For £49.00 you get a full 3 day weekend pass, which can’t be bad when you consider the price of a ticket for one of these artists alone. The great British festival weather was fantastic, with not a cloud, or a drop of rain in sight.

Friday: And so we start on the main stage with 4 piece Glasgow band Holy Esque, electro pop and sunshine is guaranteed to be a hit. Discovery Stage next for impressive youngsters Model Aeroplane, who were recently signed by Island Records . Hot footed it back to the main stage for identical twin combo Daniel and Graeme Ross, who are Gallery Circus,  (they call their genre ‘twin rock’) and attack their instruments in the vein of The White Stripes, and Slaves. Certainly some serious rock stuff going on there. 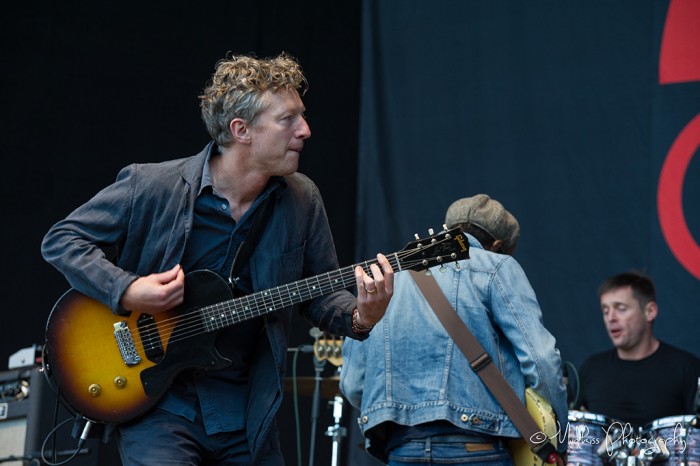 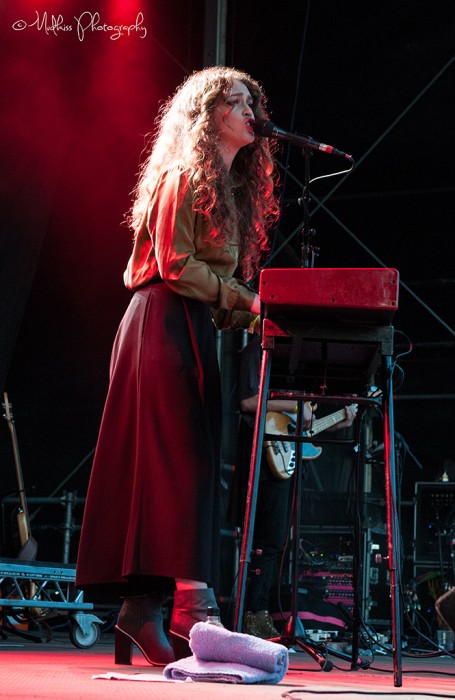 Ska band The Beat are always a fun, festival band and they didn’t disappoint this crowd with their dancing beats. Just at this point a few of us photographers were interviewed live on air for BBC Radio Leeds, – hope you were checking in? I did give Louder Than War a little cheeky plug.

The pace continued with lovable cheeky Liverpudlians Cast, giving us some blasts from the past, but we’d also got a cheeky backstage acoustic performance ,which was being filmed live on the radio (next to our press tent) prior to their set.

The effervescent Rae Morris was charming the crowd down at the discovery stage, with a halo of light catching her striking beauty,  enhancing her glorious musical talents. All hail Rae Morris a truly beautiful voice.

And finally the headliner they had all been patiently waiting for James, singer Tim Booth enters the stage in his usual casual manner, before three songs are up he’s in the crowd and surfing face down. James were certainly a massive crowd pleaser and Tim’s a very charismatic performer, who set the tone for the weekend. 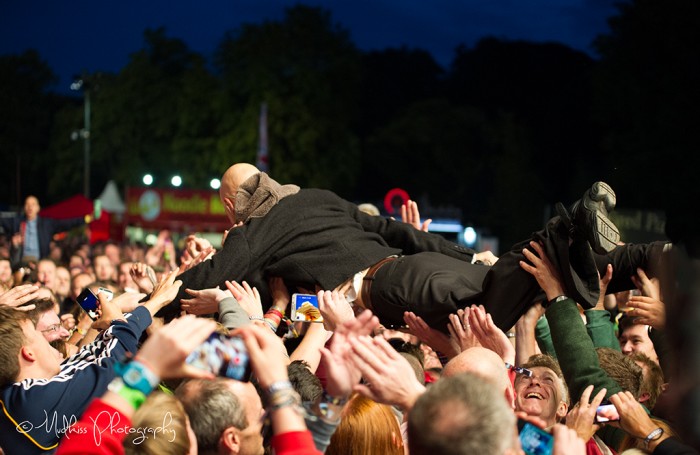 And that was me done for the night, headed back to the hotel for editing photo duties.

Saturday: I decided to pace myself a little today and be a little more selective about the bands I shot, so I arrived at the festival in time to catch 90’s retro indie band Hurricane #1 on the main stage. They seemed pleased to be back performing, and the audience appreciative.

On the Discovery stage we had – Hull 5 piece The Black Delta Movement where they proceeded to throw out some dark, growling guitar tunes., although they were mistaken for The Swiines by a few as they had moved up a slot.

Down at the main stage South Wales hardcore band Funeral For A Friend were throwing some shapes and assaulting our ears, with singer Matthew having to apologise for his squeaky voice. Now I know why ear plugs are mandatory at festivals. Now this is where it all really began personally speaking, Carl Barat & The Jackals,  all swagger and attitude, the epitome of rock n roll, this is what it is all about. I could’ve watched the whole set, but alas my work has to continue, and its onwards to the Discovery stage where two piece Kate McGill and Daniel Broadley, collectively known as Meadowlark are laying down their sparkling, poppy electro tunes in the glow of the afternoons sunshine. 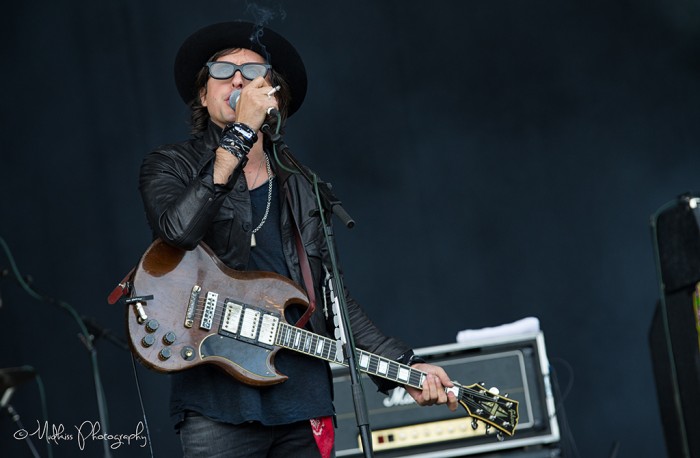 We also had Radio 1 DJ’s Scott Mills, and Chris Stark, playing a couple of sets in between the acts this afternoon, and they warmed the crowd up nicely in preparation for the lioness singer/ songwriter Ella Eyre. The front row is packed with excited youngsters, holding plaques dedicating their love for Ella, and the excitement begins for these new followers. Ella is one of the most dynamic performers in the main stream currently, and I have to say I love photographing her immensely. I’ve watched her go from strength to strength, over the past two years, she’s a very talented performer, who can’t half belt out those tunes. Needless to say Bingley fell under her spell and was one of the best of the weekend. 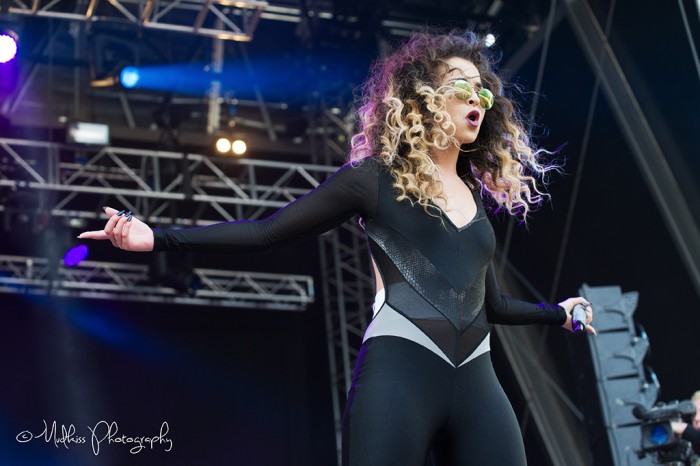 Another turn for the heavier bands, rock veterans Ash, which was pretty exciting, although the security couldn’t count and we only had two songs in the pit instead of three.

One of my all time favourite bands from Liverpool Deaf School were headlining the Discovery Stage, so I managed to capture some mad cap theatrical action before finally calling it a day with pop, soul, hip hopper maestro Labrinth on the main stage at 8.30. As you can imagine the crowd were going wild for more, but I made my exit stage right and headed out to work on my shots. 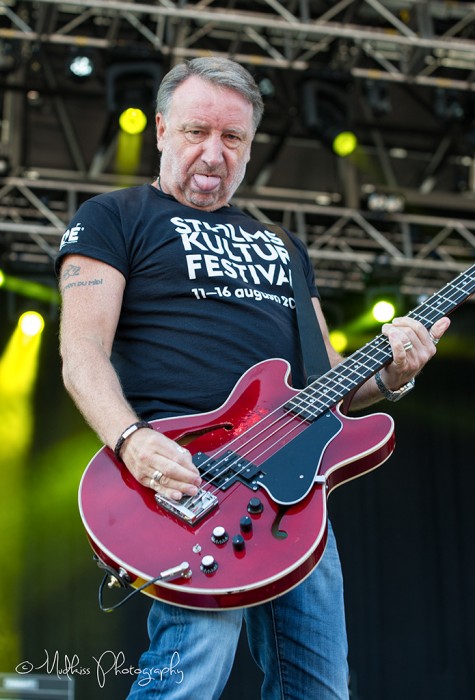 Sunday: No rest for the wicked, and we are back on site. Kicking off down at the Discovery stage this afternoon one last time, with a band unknown me –  The Carnabys proved to be a dynamite, energetic bunch from down South, owning the stage, they are on tour now,  so go catch a show. The main stage bands this afternoon and evening presented us with alternative rock band from Essex Nothing But Thieves, playing a well received lively set, with a debut album to be released in October, they seem guaranteed for success.

Yorkshire’s own reformed band Embrace, were welcomed back with open arms, and Peter Hook & The Light, also on top form playing all those anthemic tunes which took us back to our teenage angst years, and of course Hooky still has punk attitude.

An interesting relatively new indie /punk guitar band with attitude Vant, were an exciting distraction and I’m sure we are going to be seeing a lot more of them.  Alternative rockers doing the rounds of festivals are reunited 90’s Scottish indie rockers Idlewild, who played a lengthy explosive set and finally the Super Furry Animals closed the show with a spectacular performance, strobes, psychedelic meanderings, outlandish stage costumes and props. And very kindly we were allowed to photograph the whole set. 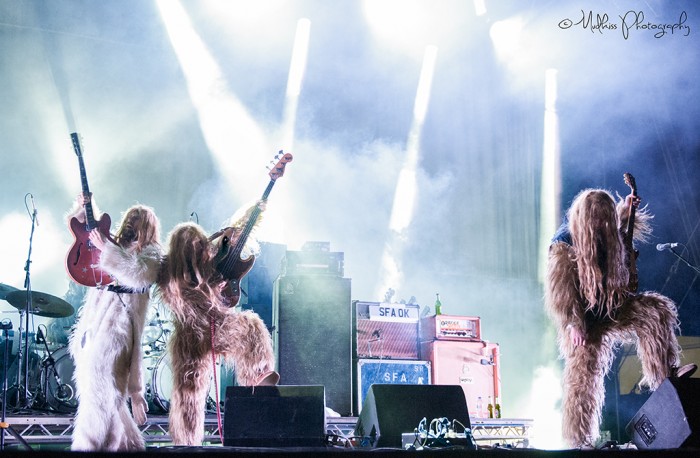 And that’s it for another year, my only little gripe is that I would have liked to have seen more female artists/bands represented on the main stage this year. We have a raft of immensely talented female musicians and artists, why is it always male bands? I guess this argument can run and run, in all areas of the music / creative industries, its time we gave recognition to women who rock. However all in all a fab weekend, great music, friendly people, plus a wonderful camaraderie amongst the photographers and press. Fancy going next year? Well you’ll be pleased to know early bird tickets are now on sale.

Words and photos by Melanie Smith. More work by Mel on Louder Than War can be found at her author’s archive. You can find her on Facebook and Twitter. Photography portfolio can be found here: mudkissphotography.co.uk.