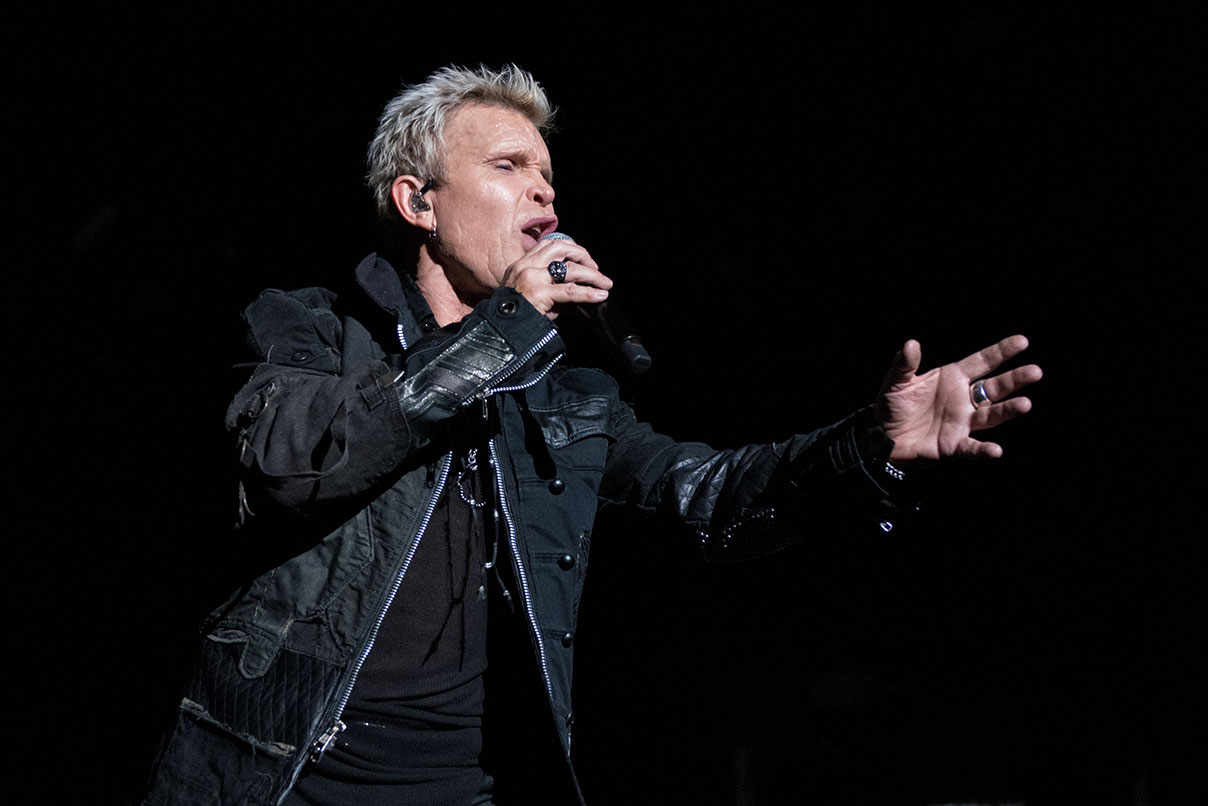 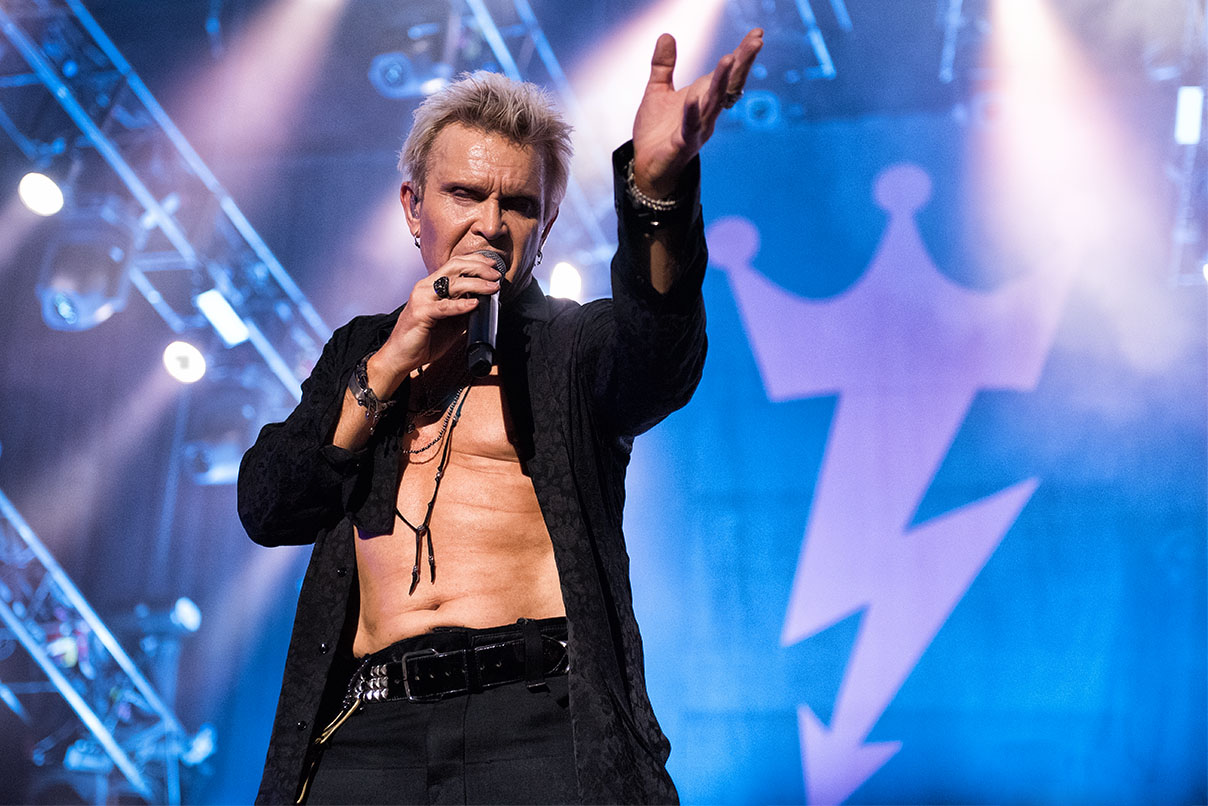 Billy Idol was originally a member of the illustrious punk rock band Generation X, he went on to enjoy further triumph with his solo career as part of the Second British Invasion with enormous success in the USA. It has been four years since Idol’s last UK tour and this latest has proven popular with sold out dates and a lot of anticipation. Louder Than War’s Katie Clare (words) and Melanie Smith (photos) went along to Manchester’s O2 Apollo to experience Billy Idol’s latest live show. 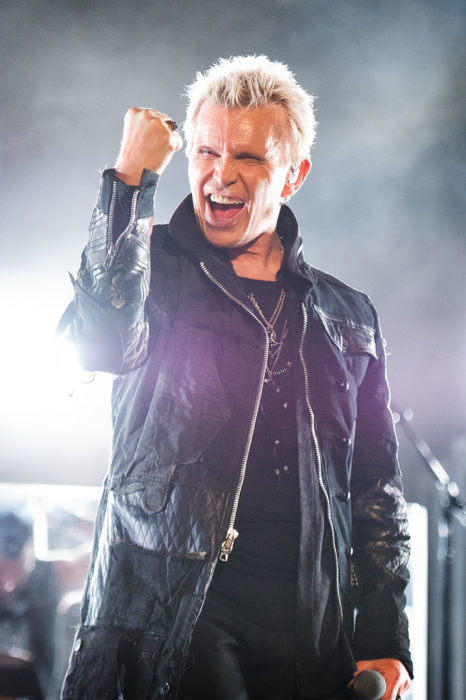 Billy Idol has always been a considerably more multifaceted performer than his punk rocker label expresses. Tonight, in Manchester, delivering at times lounge crooning, pop star fizz and even drive time middle of the road smooth rock, he swept through this mix of genres with his characteristic swagger and sneer. Idol (whose age is completely irrelevant yet every writer feels the compulsion to mention) personifies not only a rock star but a seasoned performer. Ultimately that means we are getting a great show even if, at times, it is a little bit by the numbers.

The build-up of lights and Steve Stevens gently riffing culminates in Billy Idol hitting the stage to thunderous applause with ‘Shock to the System’. A curious choice from the Cyberpunk album, to start the party off. However, within minutes the good times are fortified by ‘Dancing With Myself’, as the 80s music on MTV and a neon-accented mural in a John Hughes movie, the audience it would appear have been transported back to their exuberance filled youth.

Taken from his 2014’s Kings & Queens of the Underground album ‘Can’t Break Me Down’ it is lightweight pop punk and live that “bang bang bang” refrain perhaps did not pay off as perhaps one would expect with the audience. It is somewhat a patchy start; however Idol soon settles into providing that special musical magnetism which is what everyone has come to see. ‘Catch My Fall’, ‘Eyes Without a Face’ and ‘Rebel Yell’ follow, Idol, teasing throughout with shirt shedding only to re-dress with a jacket, lace shirt or guitar at varying times throughout the set.

Idols right-hand man Steve Stevens is provided with multiple opportunities to platform centre stage his renowned adroit guitar playing, all the while his glam rock hair blowing in the fan breeze. He wow’s with some stunning flamenco riffs, windmill-ing (al la Townsend) as well as throwing his guitar behind his head and continuing with the dedicated deliverance of each melody: Idol participating with reverence to Stevens presentation. 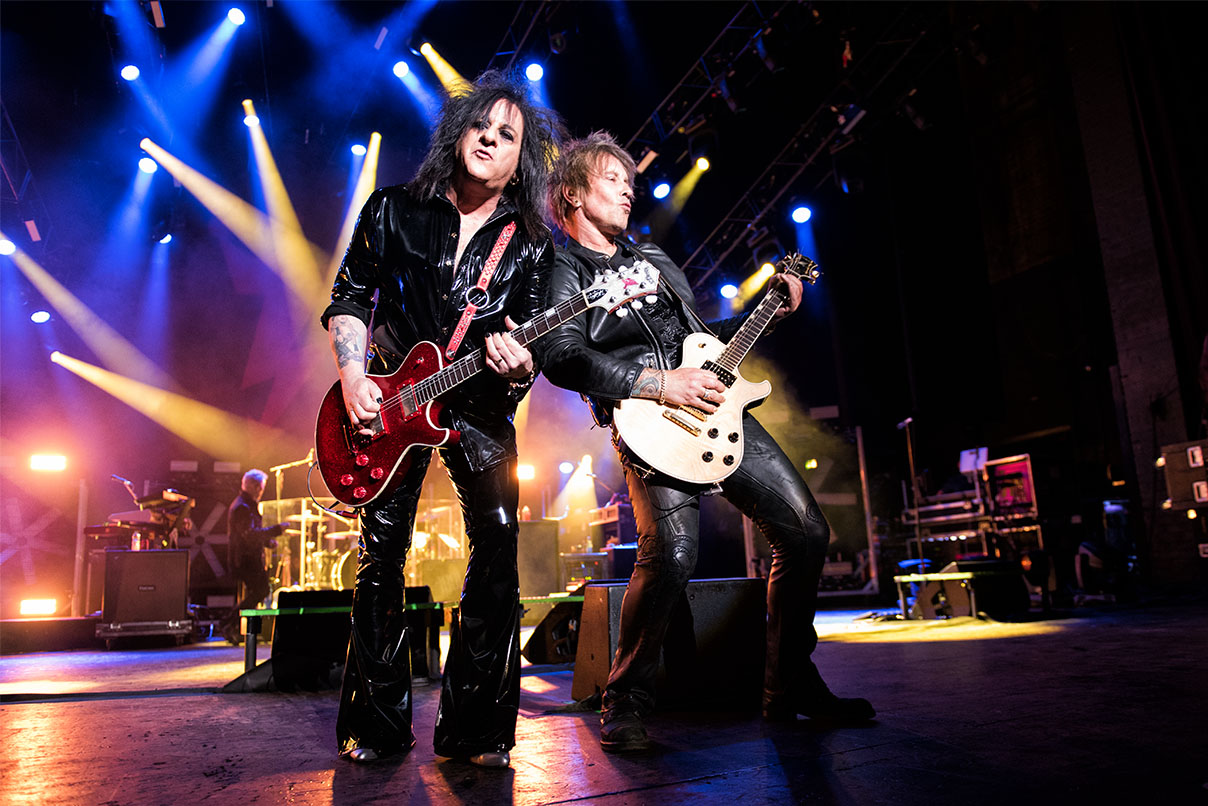 Eventually, we come to the encore, the musical money shot if you like, starting with Idol and Stevens delivering a pared-down intro to White Wedding. Within seconds of the full band returning, the crowd are jumping up and down, grinning while singing each “white wedding”. Finishing with ‘Mony Mony’, which is, a perfect decision – full of vivacity and bouncy momentum giving the audience the chance to actively and vocally join in with the performance and leaving everyone with a grin. Idol has a great voice, stage presence in abundance and while these days visceral rawness is not present it really isn’t something that anyone attending was demanding. Set lists and drumsticks were thrown into the audience, Billy thanking everyone from Manchester and well everyone from anywhere for making “my life so fucking great”. Everyone’s smiles, as we head out of the venue, the testimony to a good show.

Please note: Use of these images in any form is illegal. If you wish to contact Mel please email mel@mudkissphotography.co.uk

Tickets including VIP Meet & Greet options are on sale now from the usual ticket retailers including Billy Idol’s official website.

Live Review by Katie Clare. More news, reviews and interviews by Katie on Louder Than War can be found at her Author’s Archive. Katie can also be found on Twitter where she tweets as @tokyo_katie. Also, Katie can now be found on Instagram as tokyo_katie_captures this new feed is devoted to captures from shows past and present.