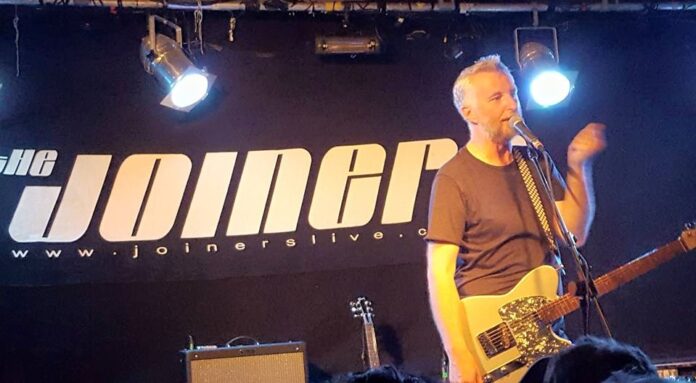 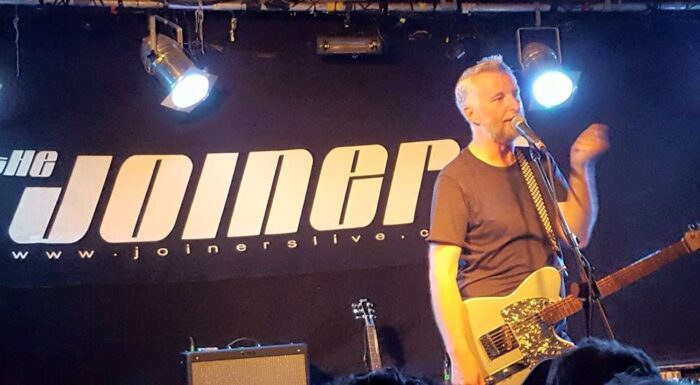 What is the Bard of Barking doing playing to less than 200-odd people in a ‘Ampshire pub venue?  Ged Babey finds out.

I’ve seen quite a few of my heroes at Southampton’s Joiners over the years; the Manics, Peter Perrett, TV Smith… a former pub turned rock venue, it’s small, needs some air-conditioning and won the NME’s Best Small Venue competition in 2013.

Pat Muldowney who runs the place is a long-time Billy Bragg fan and has pestered him online for the past five years to play a ‘secret gig’ at the Joiners, which like all small venues struggles to stay afloat and needs regular full-houses.

“Dreams Come True Tonight For Me. Billy Fucking Bragg is Playing in My Pub.” He posted on Facebook, the moment he woke up on Tuesday 2nd June 2015.

The wife had secured some tickets, which sold out in record time when they went on sale, so against my better judgement and despite a bit of  a fall-out with Pat the week before, I went along. Now, I’ve never been a big fan of Billy Bragg.  I’ve always thought he was ‘alright’.  Heart-in-the-right-place, but a bit worthy and dull and not rock’n’roll enough for my tastes…

As the set unfolded in a jam-packed sweaty Joiners I was surprised at how many songs I knew;  To Have and to Have Not , “Just because I’m Laa-zee…”  I knew from the Lars Fredriksen and the Bastards cover. Sex-u-ali-ty,  Greetings to the New Brunette “Shuuuurr-leeeeeee!”, Levi Stubbs Tears… and, of course, the one which everyone knows A New England.  Billy has got a great back catalogue of inspiring, emotional songs…. it’s just I prefer them maybe when some-one else is singing them.  That said, 2015, and as an elder statesman rather than spokesman for his Red Wedged generation, Bragg’s voice is stronger, more melodic and soulful than perhaps it ever has been.  And on stage, he is funny, avuncular, self-deprecating and overall the nice-bloke that his fans have always said he is.

I was sucked in to the whole specialness of the event. The intimacy and love flowing from devoted longtime fans to artist and back again.  Choruses became massive sing-alongs and all the hardcore Bragg-watchers were loving being in close proximity to the man.

“Uncle Bill” royally took the piss out of Hampshire ( or ‘Amp-shurr’) and no one took offence.  He can mess up the odd song and no-one minds, it just makes him all the more human. 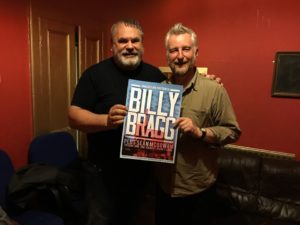 Of course, he still imparts his socio-political opinions about the media, the Tories, the power of ‘Socialism of the Heart’ and how “the tabloids interpret freedom of speech as the freedom to be cruel and bigoted.  Freedom of speech comes with responsibility….  it’s the Daily Mail’s job to make you feel like there is no one on your side.”

To my mind, the highlights of the night included an eloquent tribute to former Lib-Dem leader Charles Kennedy (who’s death had been announced earlier that day) spoken and in song. Scousers Never Buy The Sun,  and Half English, two of Bragg’s finest songs which I’ve never really heard properly won me over completely.

The support acts were Vicki Musselwhite who I missed, but comes very highly recommended and Sean McGowan.  The latter deserves a full review of his own and is proud to be described as being ‘like Billy Bragg’.  His heart-on-his-sleeve, impassioned, personal-is-political songs does owe something to Uncle Bill, but he is a supremely talented young man with plenty of quirks of his own and some wonderful, emotive songs.  Onstage he has grown and grown (like sideman Deano’s hair!) in confidence and has a well-earned reputation nationwide through his sheer hard graft and determination.  His dad, absent tonight due to illness, introduced him to Bragg’s music when he was twelve and ‘changed his life’.  When Bragg dedicated Tank Park Salute to him, I’m sure there were tears in his eyes.

My friend Oliver Gray noted , “I think that Billy may be starting to get arthritis of the fingers, several times he mentioned it was hurting him to play guitar”. I hope that he’s wrong and Billy has many more years ahead of his playing inspirational nights like this. A night Pat will never forget.

Thanks to Oliver Gray and Fahad Siddiqui for helping with some of the quotes/content. Charlie Hislop and Tim Betts for the photos More Photos by Steve Little-Triggers here.

All (other) words Ged Babey whose author profile is here.  If you enjoy Ged’s reviews and have cash to spare please donate here towards Jess Hensford’s Operation Fund.  Thank you