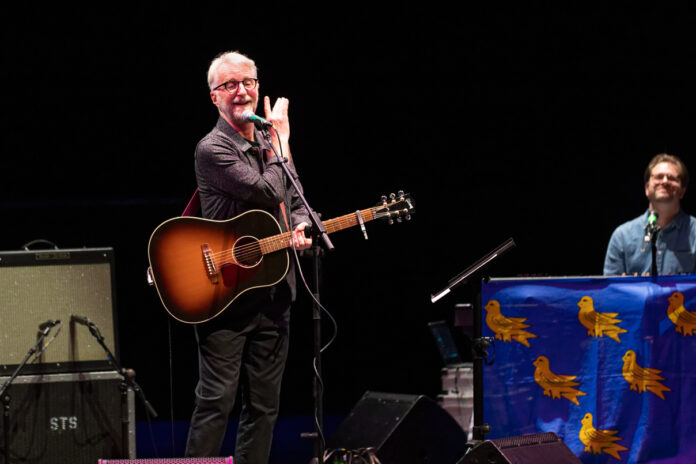 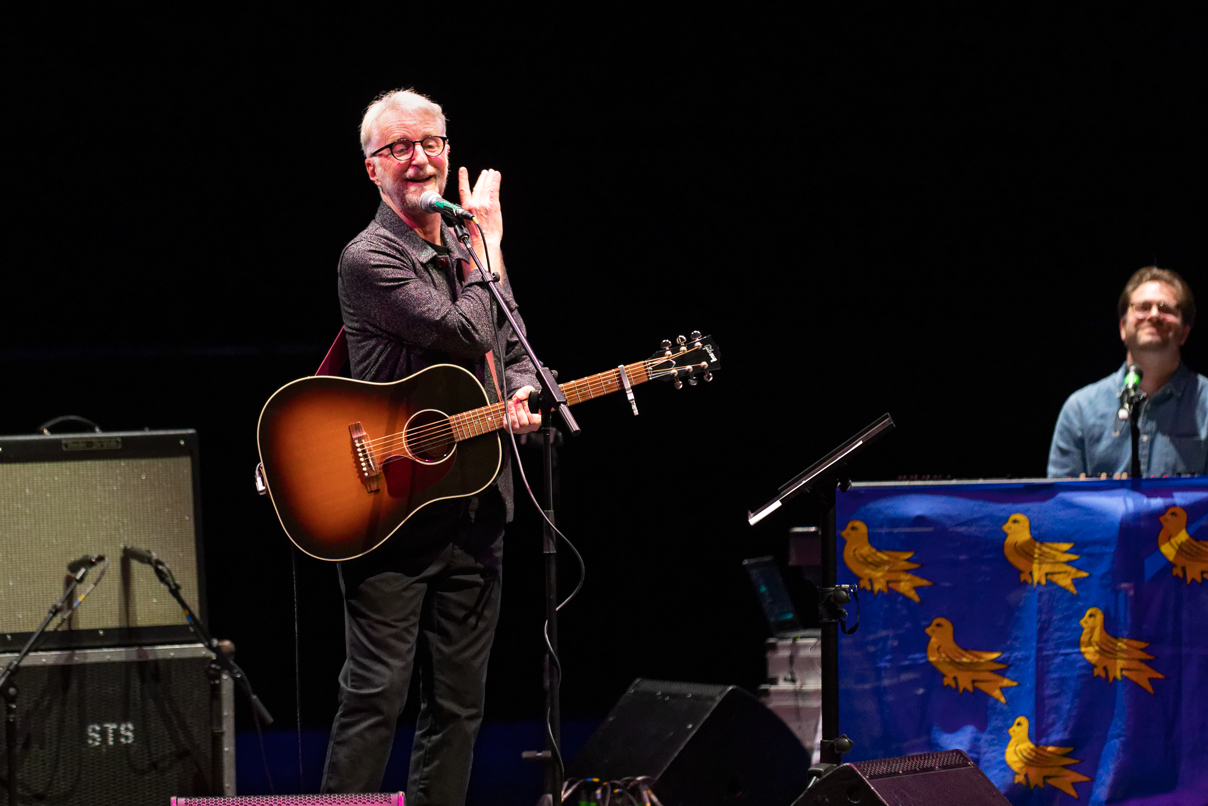 Billy Bragg has been around for a long time now, having released his first record in 1983. This means he has pretty much grown up in public and his fans have grown up alongside him, an almost constant presence in their lives for the last 38 years.

My first experience of Billy Bragg live was when he wandered into Liverpool’s HMV with a guitar and a practice amp and played his Life’s A Riot album right there and then. As a solo performer he was able to play gigs in an almost guerilla sense, turning up and blasting things out before heading into the night. For a while, our paths crossed fairly often at gigs and festivals and he was always entertaining with his songs of love and politics and the best between-song banter we were likely to hear. And then, somehow, a gap of many years opened up where I never caught him live. I kept up with his records, but I suppose I moved to the emerging dance music scene and shoegazing, both unlikely arenas for Bragg to operate in.

So catching up with him live again is a long overdue experience. We have both aged in the meantime and the Billy Bragg that walks onto the stage at Liverpool’s Philharmonic Hall is an older, wiser model, complete with grey hair, glasses and beard. 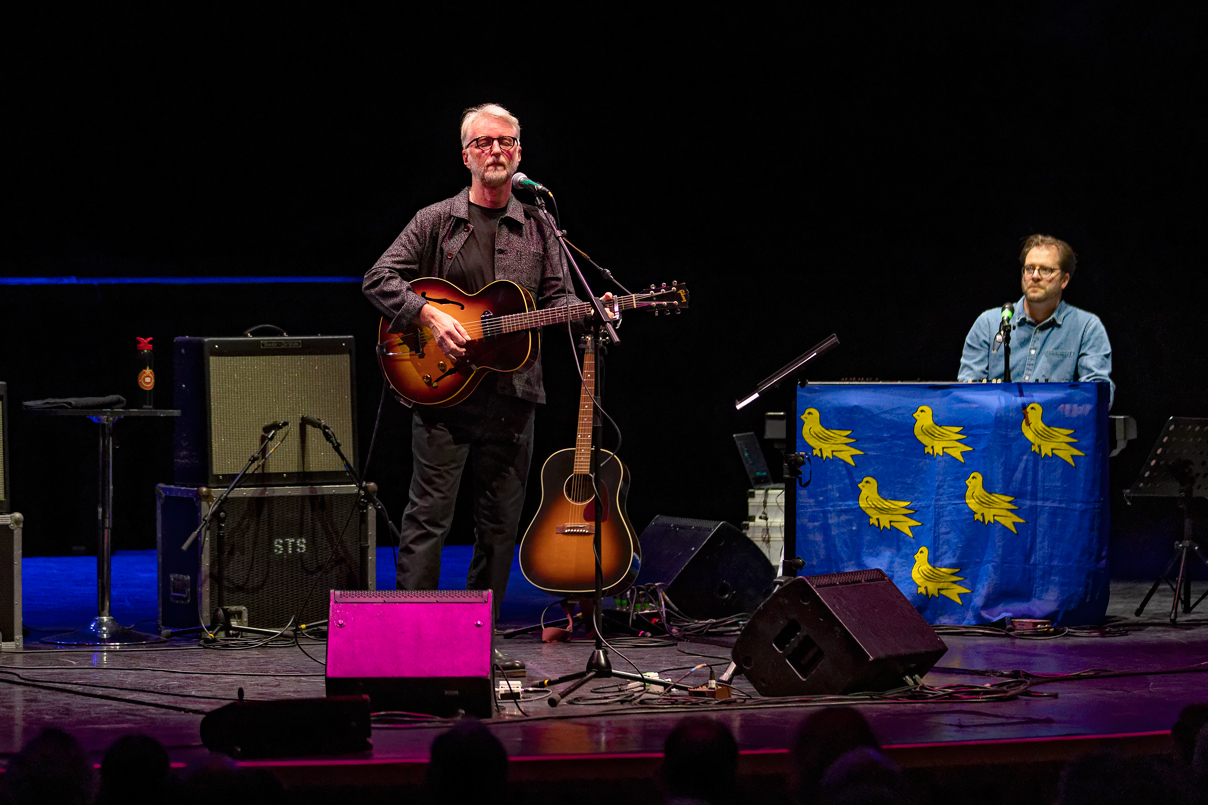 The stage set-up is suitably minimal, with two guitars, two microphones and a keyboard for Tom Collison, who ably adds texture and backing vocals to tonight’s set. The first song Must I Paint You a Picture starts us off with Billy’s romantic side to the fore. One effect of the spartan nature of both the stage set up and song is that every pluck and scrape of his guitar is evident in the sound, giving things an intimate feel: his music can still connect to an audience as much as it ever did.

One feature of a Billy Bragg live show is that the between-song links are as much a feature as the songs themselves. After the first, he tells us that one side effect of him growing his hair in lockdown is that he discovered it naturally parts differently from how he has been styling it all these years and that now “even my hair leans to the left.”

He has progressed a good amount since I last had the pleasure of his company and his guitar playing has matured along with his voice, both now filling the Philharmonic easily. His vocal range is also impressive, moving from his natural lower register to falsetto throughout the night.

The setlist tonight is a run through Bragg’s back catalogue, bringing out many fan favourites along with a selection from his forthcoming album, The Million Things That Never Happened. And he has plenty of classics to choose from, as Levi Stubbs’ Tears, The Milkman of Human Kindness, Moving the Goalposts and The Price I Pay are among those included in tonight’s set. 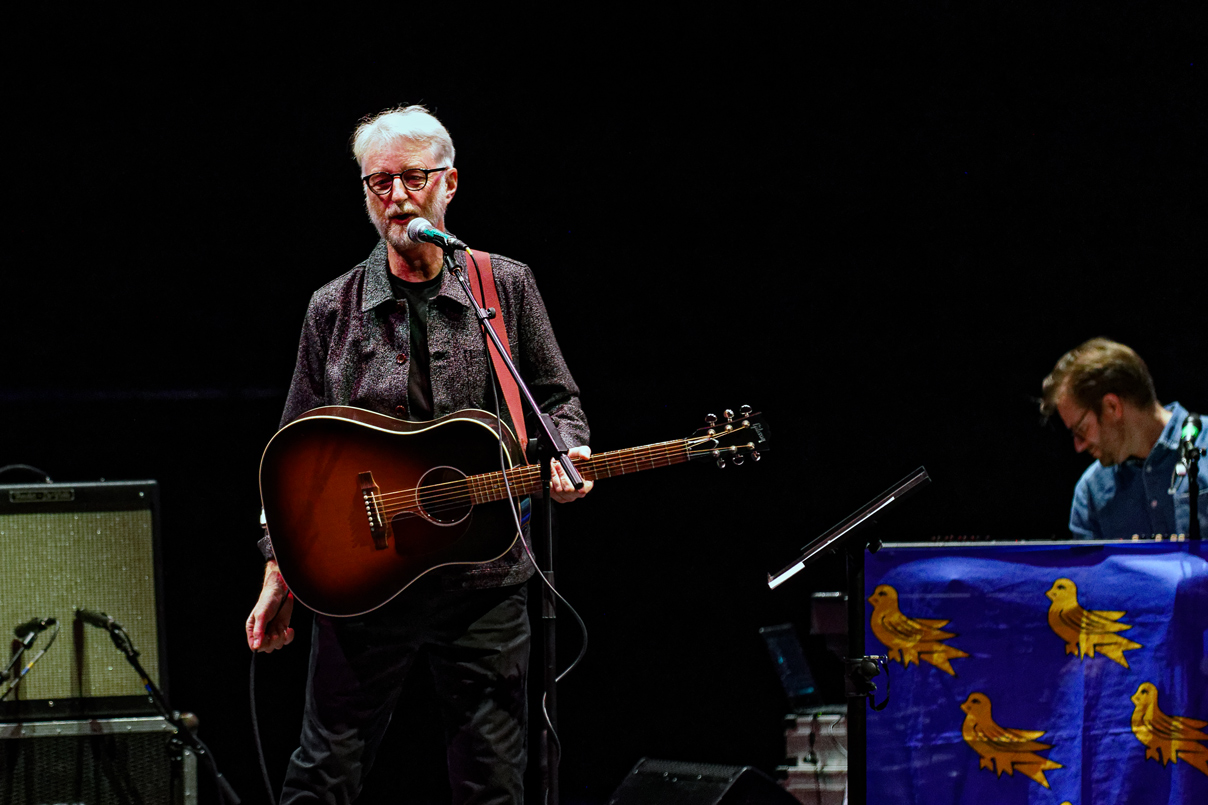 The pandemic and its lockdowns obviously figure highly in his mind, as they are frequently mentioned throughout the show and his new songs. This is not surprising as he tells us that this is the first tour he has done that could be cancelled at any minute if somebody falls sick, or if lockdown rules suddenly change. He also apologises that as a result of this he is unable to take part in a meet and greet after the show, as it may result in him catching the virus that would pull the plug on his tour, advising those planning on buying a t-shirt from his merch man: “Don’t cough on him for fuck’s sake.”

During one long between-song talk (or ‘raps’ as he calls them) about the pandemic and how we should wear masks for the good of others, because a society works when people go out of their way to do just that, an audience member shouts out: “Just play a song Billy!” Bragg points out that this is all part of the show and that this must be the punter’s first Billy Bragg gig if he doesn’t know how it works. Later he will tell us that he often gets heckles in that particular rap, along with people walking out of his shows and, in one worrying development, people looking at him and drawing their fingers across their throats. All these years later, Bragg’s passion and politics can still divide it seems. “You can choose your friends but you can’t choose your fans” he tells us.

Tank Park Salute has to be one of the most moving songs ever committed to vinyl and tonight’s rendition brings this to the fore. At its conclusion, another audience member stands up and tells Billy what this song means to him. I am too far away to hear the details, but from what I can gather, this man lost his father and both this song and Bragg’s commitment to the unions mean a lot to him as a result, finishing with “I fucking adore you!” Bragg responds by saying “Solidarity brother!” and later dedicates There Is Power In A Union to the man’s dad.

The set passes along on a fairly constant, relaxed level for most of the night, but towards the end something happens and the intensity ramps up, as Bragg’s impassioned talking hits home with the crowd. Liverpool is a city that comes primed for his brand of passionate politics and during There Is Power In A Union, fists are raised and people sing along to the chorus. 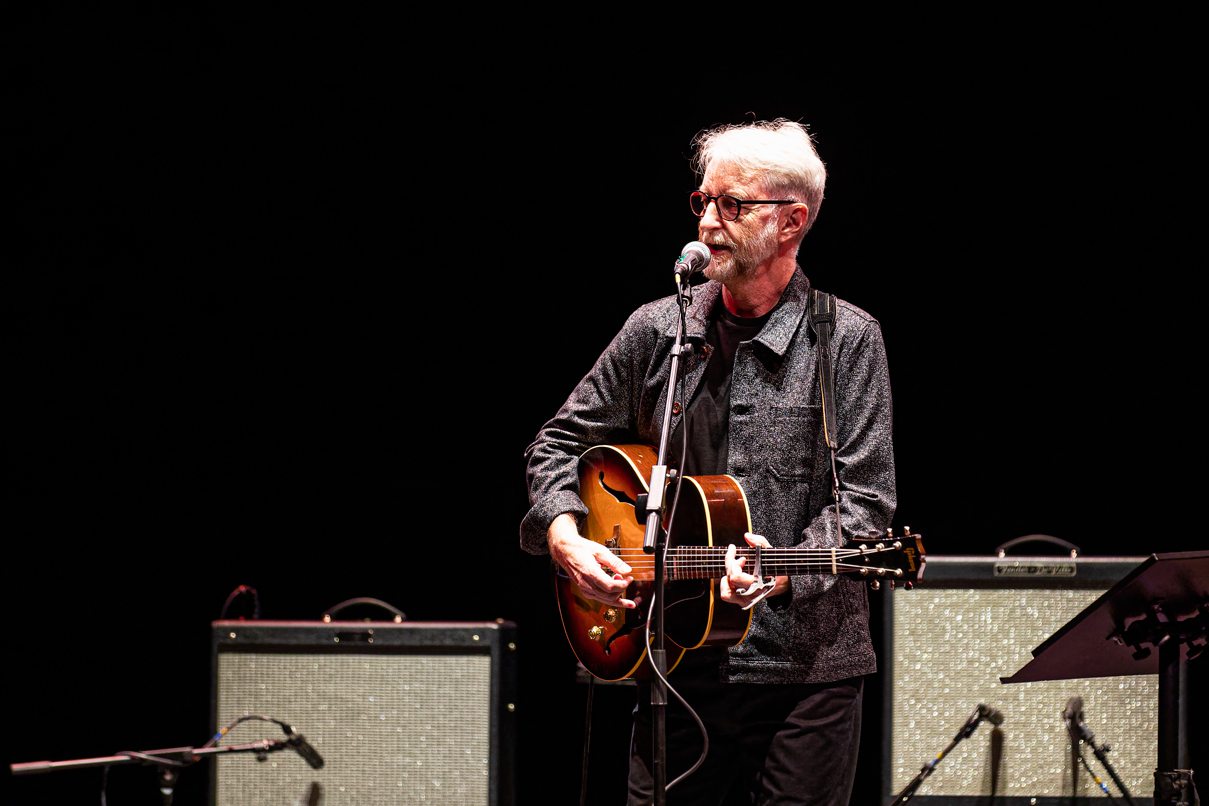 The new songs tonight include I Will Be Your Shield, which looks at how we can protect those we love physically and emotionally and gives truth to reports of Bragg’s new album being his most personal yet. Ten Mysterious Photos That Can’t Be Explained, co-written with his son Jack Valero, looks at Bragg’s tendency to be distracted by clickbait and sensationalist links on the internet, describing it as “heroin for autodidacts.”

Pass It On is introduced as a look at Bragg’s decision to copy the family photographs and distribute them among family members so he wouldn’t have to rush into a burning building to rescue them should the need ever arise, but also how the stories of our parents should be passed on to future generations so who they are does not become lost.

Bragg leaves the stage to thunderous applause before starting the encore by playing Scousers Never Buy The Sun to an almost non-stop cascade of cheers. It is easy to see why Bragg likes the way that Scousers have chased Murdoch’s tabloid rag out of the city, creating one of the longest and most successful boycotts the UK has ever seen. It is an example of what people can achieve when they come together and how they can defeat even mighty enemies with a show of solidarity.

Solidarity is a much-used word tonight, as is empathy, Bragg’s reasoning being that this quality is essential to how we should operate as people and how music is able to connect so many of us. Tonight he and the people of Liverpool demonstrate both of those qualities in spades. He may be older, but Billy Bragg’s fire burns as bright as it ever has, and tonight we could say the same about his audience. 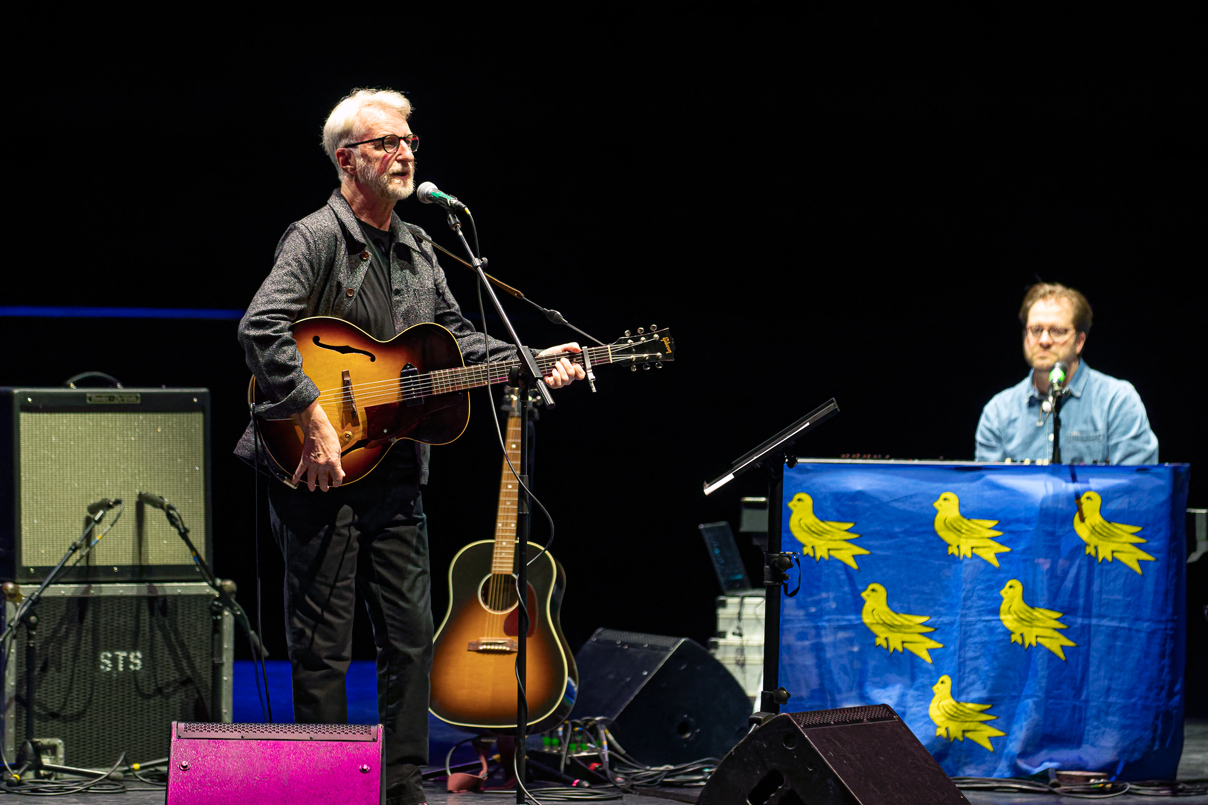 Words by Banjo, you can find his Author profile here: