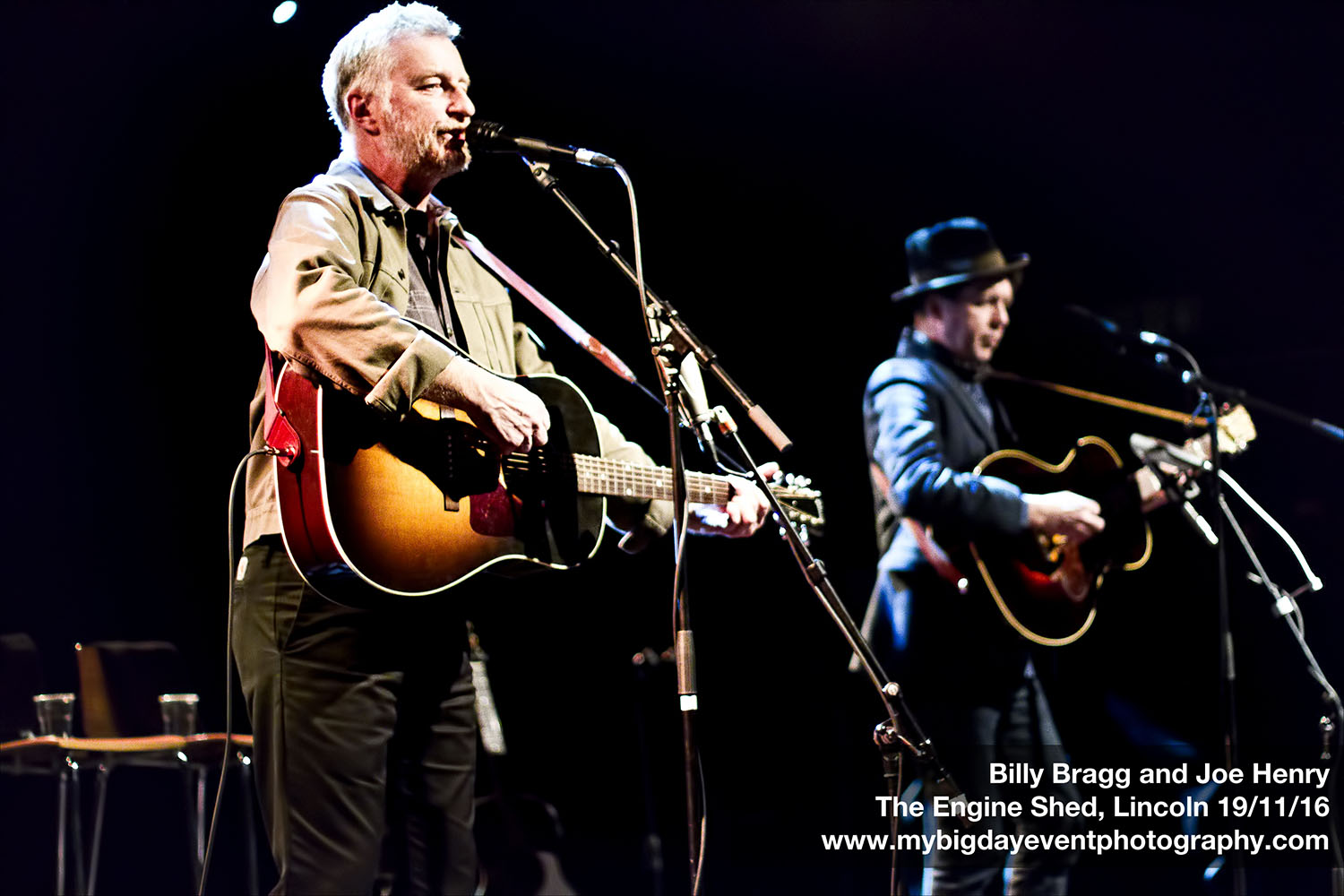 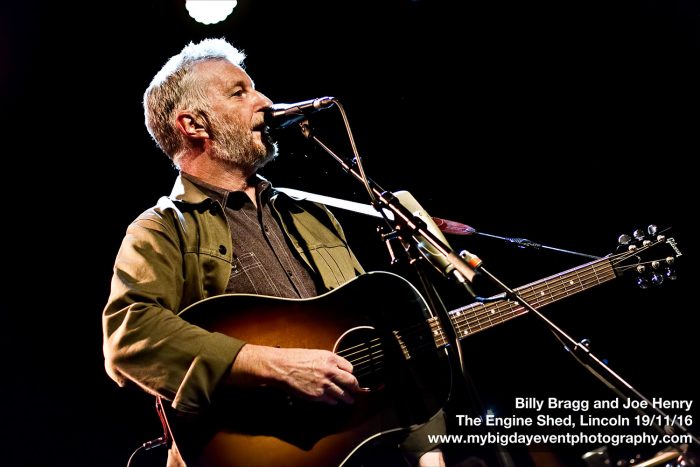 It’s been a Billy Bragg sort of week in our house. Firstly the new album dropped, (and an excellent album it is too), then I got to do an interview with him (for a different publication I’m afraid) and finally on Saturday it was time to go and see the man himself, at the Engine Shed in Lincoln, alongside his current collaborator, US jazz/Americana artist Joe Henry.

Their new release is Shine A Light: Field Recordings From The American Railroad, a collection of songs infused with the spirit of Lead Belly and the tradition of the American hobo, which was recorded live in waiting halls, ticket offices and by the trackside during a 2,700 mile rail journey from Chicago to Los Angeles. They even managed to record in Room 414 of the Gunter Hotel in San Antonio, scene of Robert Johnson’s legendary 1936 Brunswick Records session at which Sweet Home Chicago and many other blues standards were recorded. 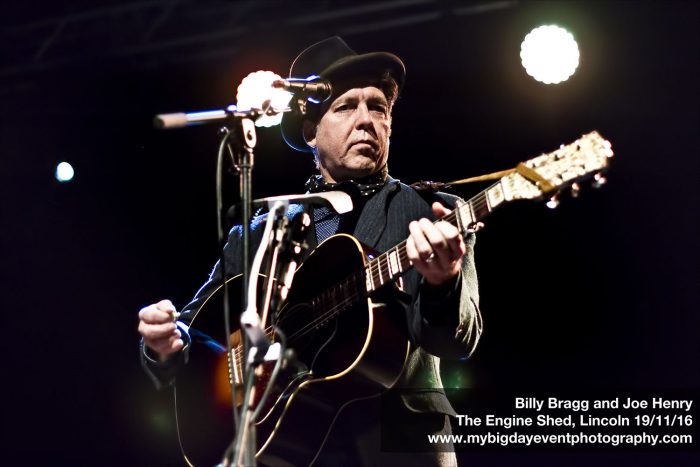 So we’re going to Lincoln for an evening of train songs. Nothing niche about that. You sort of think that, back in the days when the project was being put together, Bill and Joe, may have thought that it would be politically fairly low key.

But that was before messrs Farage and Trump managed to turn the world on its head and all of a sudden this tour seems like a very different thing. When I spoke to Billy Bragg earlier in the week he told me about how he had been at Glastonbury at Leftfield when the Brexit news came in and how, when he went on stage the roar from the crowd was like the one he usually finishes with as if people just felt the need to connect with like minded individuals.

And that’s how it feels at the Engine Shed, which is not a huge venue, but it’s pretty well packed and this is not an audience of trainspotters or folk music enthusiasts come for a pleasant reminisce over some songs culled from some old 78s. This is a group of angry people.

The evening is divided into four sets – Railway 1, Henry solo, Bragg solo, Railway 2 – and all four are shot through with comment on the situation on both sides of the Atlantic. “We’re to be pitied, not hated” Joe Henry says of the election while Bragg, points out that our own refusal to welcome refugees, the closing of the Calais Jungle and the EU’s policy of paying Turkey to keep refugees from crossing the Bosphorus effectively removes our right in the UK to mock Donald Trump’s wall. 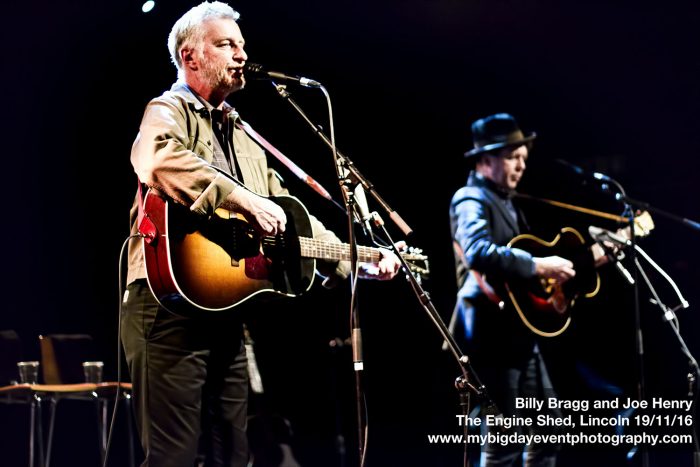 There’s plenty of chat as they explain the background to the songs and to their own journey and their determination to keep the project from becoming just a Bill And Joe Like Trains album. The material has been carefully chosen and in most cases the versions sung are the originals, or close to it, so that Rock Island Line is a call and response work song, as in the Alan Lomax’s 1934 recording at the Cummins work farm. Similarly their take on In The Pines owes more to the Louvin Brothers recordings than to later remodellings, although Kurt Cobain gets a name check.

Joe Henry’s set probably comes as a revelation to many of those present – not just because of what a good songwriter he is – (we knew that already) – but more for what a terrific singer he is. Sometimes you need to hear a performer live to appreciate their voice fully and although I’ve listened to Henry’s albums in the past I’ve already found myself appreciating them more since this gig. Trampoline in particular, which appears on the eponymous 1996 album has a fine bluesy soul vibe and his brand new song for Mohammed Ali – Shook Up The World – is a heartfelt and moving tribute to the greatest. He finishes with a cover of Allen Toussaint’s Freedom For The Stallion – a song whose time I honestly thought might have passed, in what we have been careless enough to call a post racial world, but Henry makes it all too relevant again. Help us find a way. 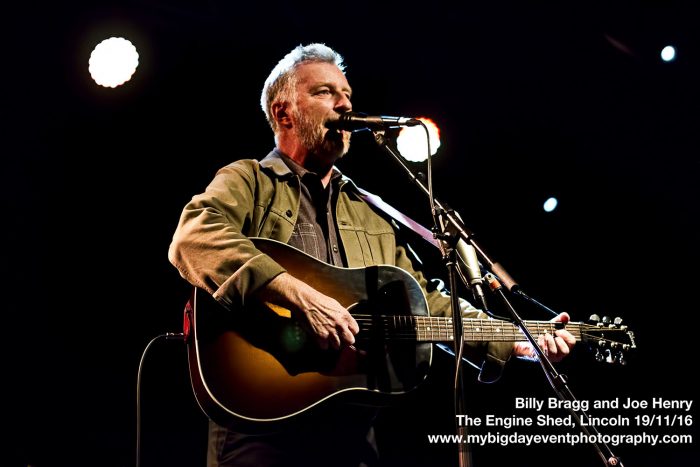 Billy Bragg’s set opens with Between The Wars and it’s a great choice because it’s a no nonsense spit in the face of the ruling classes anthem and at a time like the present Bragg and many others seem to think that this is no time for politeness. He follows with Help Save The Youth Of America which he rounds off with three lines of Washington will burn instead of the usual incendiary diversity and then Accident Waiting To Happen which fits the mood particularly well. The dedicated swallower of fascism line, which sometimes seems like a dirty joke too far (rather like it’s first cousin the impressionable wet cement) now seems like a telling and prophetic piece of commentary.

If Bragg sounds angrier and more urgent than usual then so do the songs – they seem to have changed since I heard them last. Even the old warhorse Power In A Union seems to have new shine to it and a spring in its step. People are not exactly singing along, more breathing along, but breathing furiously.

Then it’s back to the railways for a second time including Hobo’s Lullaby which we’re invited to hear not as the voice of a 1920s American drifter but as the voice of the dispossessed of any era and especially our own – the voice of the Calais Jungle. The evening ends with a lovely, gentle take on John Hartford’s Gentle On My Mind, a doff of the engineer’s cap to the new Nobel laureate with Tonight I’ll Be Staying Here With You and finally a heartfelt rendition of Woody Guthrie’s Ramblin’ Round, one of the great outsider anthems which serves to tie up the diverse themes of the evening.

We all leave suitably angry and at times like this that’s the way it should be.