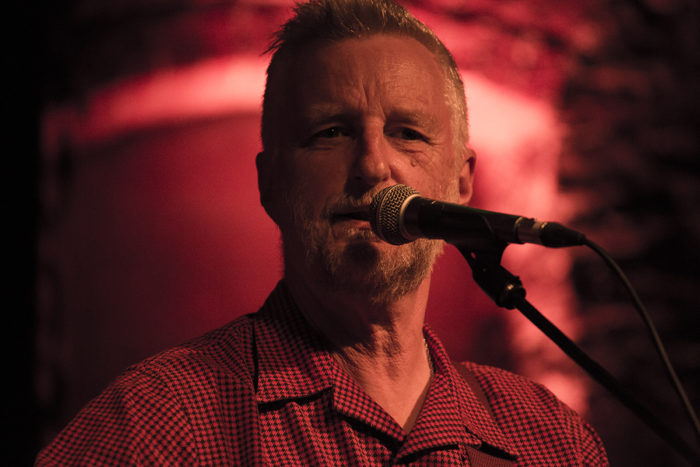 ‘What fucking times we live in!’ exclaims Billy Bragg five songs into this Bristol-leg of his three-night retrospective, the One Step Forward Two Steps Back tour. Indeed Billy, and ripe for the pointed poetic polemic of our most famous political troubadour.

What we get is basically three shows in one each night: music, stand-up and a sort of political rally. Bragg has always been about this, exuding humour, warmth, candidness and sound politics through his songs and his personality.

“It’s like playing to a bunch of Billy Bragg tribute acts,” he says, opening the first night with Sexuality (with its subtle line change ‘don’t threaten me with Morrissey’) as each member of the audience seems to sing along to every line of the song. Indeed it’s the same for all the old numbers on each of the nights, a communion of singing, a unison of voices with Bragg’s jagged guitar and Barking vocals leading the way.

While the first night is a kind of minesweep through his first half dozen albums and stuff from throughout his 35-year career, a ‘bish bash bosh’ as he puts it, night two is  the ‘chop and clang’ of his first three albums, 1983’s Life’s a Riot with Spy v Spy, Brewing Up With Billy Bragg (1984) and Talking With The Taxman About Poetry (1986), and the final night is a journey through his next three albums, the jangled moods of Workers Playtime (1988), the poppy Don’t Try This At Home (1991) and the back-to-basics William Bloke (1996).

In there, of course, are covers of his great inspiration Woody Guthrie’s Ingrid Bergman – and a long explanation of the eroticism of that song – and the charged polemic of All You Fascists Are Bound To Lose. We get the latter more than once, the second time on Friday dedicated to what would have been Guthrie’s birthday this Sunday, and as a dig at the imprisoned fascist Tommy Robinson.

It’s the nature of the three nights that certain songs are repeated, and between-song chat also, and there are some of the same faces at each night along with new ones, the age demographic meaning that we’ve all been round the block for roughly the same time as Billy too. But age withers not the passion. On night two while bringing up the thorny anti-Semitism issue in Labour he turns on and gets a member of the audience ejected for yelling out ‘We hate Tottenham, We hate Tottenham’. “You can say what you like but you’re going to be held to account for saying that at my gig,” he says before tearing into a coruscating Help Save the Youth Of America, and then praising his old original (and heavy!) guitar for its heckler-spotter qualities.

Typical of Bragg he then goes into a moving The Man In The Iron Mask before telling us that he’s always sung about love and protest even during the macho political climate of the 80s: “I was the only one in Red Wedge singing about wanking and politics”. Levi Stubbs’ tears follows…

That’s always been the strength of Bragg, that he mixes the personal and the political. He really comes from a tradition of left-field political folk, inspired by punk (a blend of ‘The Clash and Max Miller as he puts it…). A protest singer, his material has always been fairly straightforward, his messages direct and heartfelt, his love songs poignant. There’s a simplicity and honesty of emotion that cuts through the crap. At best it hits home with a subtle power. 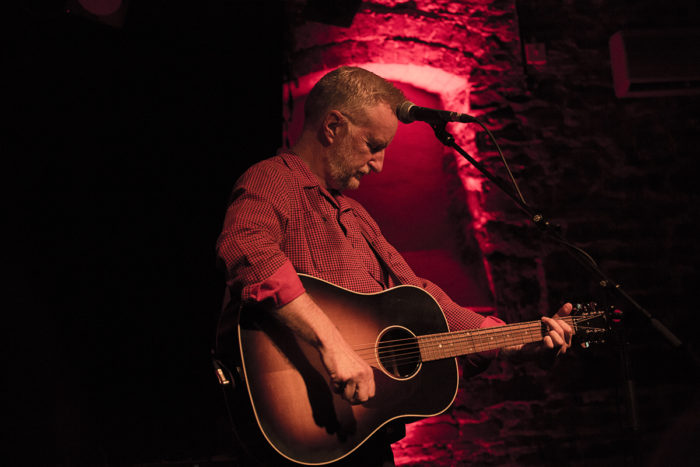 Accountability is big on his agenda, and how it is missing from modern politics. Morrissey comes into this too, how he has to be held accountable for his right-wing rants. Coming at it from a fan’s perspective Bragg explains that he is saddened and feels let down as much as anything else. He explains how music is the currency of empathy and emotion and how Morrissey has rubbished that. But on the more positive side of the coin each night he talks about how his activism gets a boost every night when he sees the empathy of audiences towards his songs, and hopes that we too are given strength and hope in return to go and challenge cynicism everywhere, including our own, and to try and change and stand up to the shit that surrounds us.

“Socialism is nothing if it is not organised compassion,” he says, praising to the hilt the schoolkids protests and Extinction Rebellion. “If they’re looking for a Pete Seeger, I’m yer man.”

For all the brilliant renditions of Milkman Of Human Kindness, Upfield, Greetings To The New Brunette, the stirring Great Leap Forward, the country twangs of Everywhere (he also does a great few lines of The Who’s Tommy a-la-Johnny Cash, to explain chord changes…), the climaxes of New England on the first two nights, the full length and breadth of his material (even his version of the EU anthem, Beethoven’s Ode To Joy – valid and telling in these Brexshit times) the laughter and tears, the gut-wrenching beauty of Tank Park Salute, his powerful rendition of There Is Power In A Union stand out. It ends the set pre-encore on the first two nights and ends the whole caboodle on the third. Fists are clenched in solidarity and raised in the air, the audience sing as one, the guitar chords chime out almost like bagpipes, and we feel united.