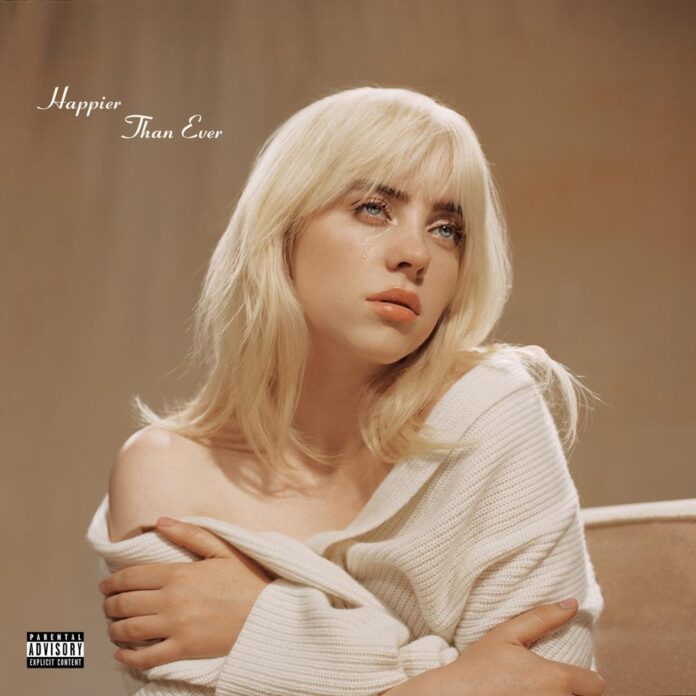 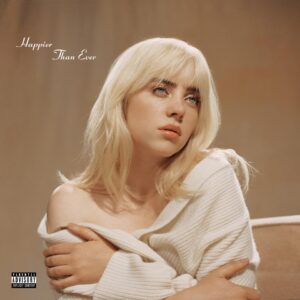 Billie Eilish: Happier Than Ever

Billie Eilish released her second album, the highly anticipated Happier Than Ever, on 30th July. Still only nineteen years old, the Los Angeles native remains one of the biggest stars to emerge in the 21st Century. Iain Key listened to the album for Louder Than War.

Unless you’ve been living on the most far-flung planet of the galaxy for the last couple of years, it will have been practically impossible for you not to have heard of the teenage wonder that is Billie Eilish. Even if you’ve not knowingly listened to any of her music, you will have seen social media posts, magazine covers and newspaper stories.

My first introduction to the all-conquering Billie was in 2018, when I saw the video for the track You Should See Me in a Crown (a title taken from a line in BBC’s Sherlock of all places). What first drew my attention wasn’t the music, but the fact the artist had spiders climbing over her face and out of her mouth in the video. As a sufferer of self-diagnosed arachnophobia, I was compelled to find out more. Quickly, I found that I had been actually living under a musical rock. The prolific (then) seventeen-year-old was fast becoming the most talked-about artist on Earth, already releasing twelve ‘singles’ before this, which would be the first track from her debut album, When We Fall Asleep, Where Do We Go?

I felt like I was missing something and needed to catch up. After reading a couple of interviews, I was intrigued to find that, rather than being a manufactured act, born out of hundreds of focus groups with a team songwriters, she was a genuine talent. Not only did she write most of her material with brother Finneas, but she also shared some of the production duties with him too. By the time the acclaimed, game-changing album arrived in late March 2019, I was on board. There was something about it which gave it an edge that appealed to the indie fan in me.

Then came Glastonbury. Bumped up the bill by Emily Eavis, Billie owned the Other Stage with an energetic sixty-minute set (with some technical issues) broadcast on the BBC, dressed in a colourful, exclusive Stella McCartney two-piece. The plaudits were unanimous: ‘a mesmerising, life-affirming set from a future headliner,’ they said. From that point, the much deserved ‘hype’ seemed to step up a notch, ultimately leading to countless awards across the globe and being picked to record the theme to the latest James Bond movie.

No Time To Die, backed by legends Hans Zimmer and Johnny Marr, would give her her first UK number one single, despite some purists being dismissive. Despite this, and even in a world that gone to shit, her popularity has grown and grown, the debut album holding 4th place in the UK’s best-selling albums of both 2019 and 2020.

After performing the aforementioned Bond theme at the 2020 Brit Awards, the now eighteen-year-old was awarded the Best International Female Solo Artist. During an emotional speech, she admitted, “I’ve been feeling very hated recently,” referring to boycotting social media in order to protect her mental health. This would appear to have been a watershed moment, paving the way to Happier Than Ever.

In a recent interview with the BBC, she spoke of her growing confidence, no longer feeling the need to hide under a hoodie and feeling more comfortable with who she is. This can be heard throughout Happier Than Ever. The opening track, Getting Older, sets up what is to come and the honesty we’re about to hear: “I’ve had some trauma, did things I didn’t wanna,/ Was too afraid to tell ya, but now, I think it’s time.”

The first couple of releases, My Future and Therefore I Am, actually signposted this. The former is a positive feminist anthem, the latter a confident, catchy track disregarding others’ views of her and enforcing the message that she doesn’t require anyone to run her life for her. The third, the soft acoustic Your Power, is at odds with its subject matter.

Dealing with sexual abuse, coercion and control, these are not Billie’s experiences, but “about many different situations that we’ve all either witnessed or experienced.” The final singles released ahead of the album, Lost Cause, returns to the signer apparently writing from the heart, a breezy kiss-off to a would-be suitor and NDA, with its pulsating beat, dealing with the tough side of fame, it references the stalker she successfully got a restraining order against earlier this year.

Oxytocin wouldn’t have sounded out of place on Madonna’s Erotica album (I’m showing my age here). It’s the most sexual thing Billie has done to date. Named after the love hormone, it tackles desire and lust. The lyrics are pretty on the nose: “If you only pray on Sunday, could you come my way on Monday?/ ‘Cause I like to do things God doesn’t approve of/ If She saw us.” Love, rather than lust, is the subject of Halley’s Comet. It’s a gentle piano-led track, almost a lullaby, telling a story of falling in love and dreaming about a future with someone: “I’ve been loved before, but right now in this moment/ I feel more and more likе I was made for you.”

This is followed by Not My Responsibility, a darker piece originally shown as a short film during her world tour. In the video, it depicts Eilish slowly taking off her clothes whilst addressing and criticizing public body shaming of her and others. With or without the visual, it’s an uneasy listen.

Happier Than Ever’s highlight, for me, is the title track and penultimate song on the album. The opening 2:25 is a gently-strummed ballad which then transforms, with a bit of a Day In The Life riff, into to a monstrous foot-stomping rock scorcher. It’s cathartic and about getting someone out of your life, as the singer briefly discussed in her documentary The World’s a Little Blurry: “The whole song is just more like nothing even specific that they did, you’re just not happy being with them. Can’t even explain it.”

The title track had originally been set to conclude the album, but Male Fantasy was chosen instead, Billie not wanting to “end on an angry note.” The final track is a love song about a love that is indestructible, even if the association between those involved has disintegrated. I’m sure whatever age we are, we have all had one of those and can relate to it.

For people expecting another When We Fall Asleep, Where Do We Go? there may be some disappointment. Much of Happier Than Ever appears subdued on the first listen. There isn’t anything as instantly catchy as Bad Guy or Bury Your Friend, but the more you listen, the richer and more rewarding it gets. What Billie has delivered here is a confident second album, which will resonate and be a soundtrack with fans of a similar age, while being enjoyed for what it is by those of us older.

I set out listening to this album thinking, ‘I wonder what it’d be like for her to work with a different producer,’ but in hindsight, with the variety in the songs she and Finneas have produced over the last few years and the growth that Happier Than Ever delivers, I want to hear more. With two successful albums under her belt, whatever Billie does next will be interesting.

I’d put a bet on her being a Glastonbury Headliner in 2022, though…