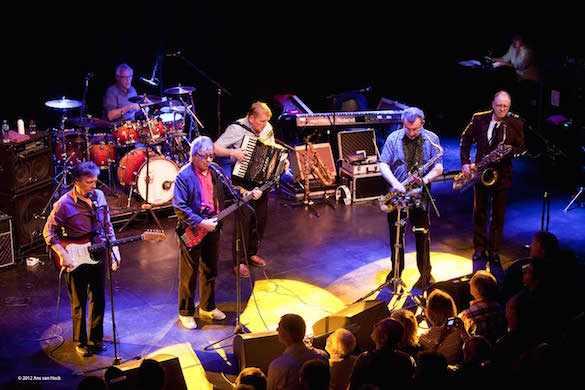 The Rose Theatre, Kingston Upon Thames

Bill Wyman’s Rhythm Kings take to the stage at the Rose Theatre, Kingston Upon Thames for a two hour set of classics featuring musicians at the very top of their game. Louder Than War’s Craig Chaligne reviews.

Bill Wyman has spent the last 18 years touring Europe’s theatres with his band. A loose collective, it has featured some outstanding musicians (Gary Brooker, Georgie Fame) and served as launchpad for others (Mike Sanchez, Martin Taylor). The Line-up for the show at The Rose Theatre featured returning member Andy Fairweather Low who had a few days available in his busy schedule with his own band The Low Riders and newcomer Hamish Stuart from The Average White Band and a member of Paul Mccartney’s band from 1989 to 1994. Stuart was deputizing for an absent Albert Lee who was touring America with his own band. Others members include horn players Frank Mead and Nick Payn, singer Beverley Skeete, drummer Graham Broad, keyboard player Geraint Watkins and the band leaders Terry Taylor (guitar) and Bill Wyman (on bass of course).

The Rose Theatre is a 900 hundred seat auditorium and can be reached walking from Kingston train station in less than 10 minutes walking (or 4 minutes running as I hat to catch the 22.48 train to Waterloo after the gig…). My seat wasn’t the best in the house as I was in the far left of the upper circle which means I didn’t see much of Andy Fairweather Low apart when he took centre stage to sing. Bill Wyman came on  first and thanked everybody for coming and introduced the band members one by one. They have got a singer for every style of music, Beverley Skeete can tackle every soul number that you could think of (excellent version of It’s a Man’s World and I Put a Spell on You). Hamish Stuart with his sweet voice can do anything from soul (He Was Friend Of Mine) to Rock’n’roll (I’m Ready). The musicians are all top notch which resulted in some particularly fine performances. Andy Fairweather Low’s sung a superb version of Route 66 on which he replicated Keith Richards’s solo note for note. Geraint Watkins as usual was outstanding whether tackling the boogie woogie classic Chicken Sack, a Howlin’ Wolf cover (300 pounds of Joy) or a Chuck Berry number (Johnny B Goode, the arrangement of which was a carbon copy of the one he does with his band The Mosquitos).

The evening was divided into two halves and you can see that great care had been put into the set list, as the two hour show just flew by. The between song activity was also great with Frank Mead and Watkins competing on who would make the most long winded song introductions. Watkins’ Howlin’ Wolf story was a cracker. The evening finished with another Chuck Berry Cover (You Never Can Tell), featuring Bill Wyman on lead vocals.