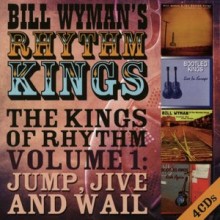 The Kings of Rhythm Vol 1 : Jump, Jive and Wail

Walking away from the biggest rock’n’roll band in the world mustn’t have been an easy thing to do but it’s without a second glance that Bill Wyman officially announced his departure from The Rolling Stones in 1993. What was going to be his next project ? Reprising an idea that he had developed in the mid-eighties with his “Willie and the Poor Boys” collective (also reissued by Edsel recently) was what he did. Originally assembled for Ronnie Lane’s ARMS concerts for the research against MS, the band featured former Yardbirds guitarists (Clapton, Jimmy Page, Jeff Beck), Steve Winwood, Lane’s former colleague Kenney Jones, a brace of Stones (Bill Wyman and Charlie Watts) as well as the likes of Andy Fairweather-Low, Ray Cooper, Chris Stainton and Simon Philips. Wyman kept the concept for The Rhythm Kings.

Built around the core trio of Wyman, long time friend Terry Taylor on guitar and drummer Graham Broad, the band released their first album “Struttin Our Stuff” in 1997. Featuring a plethora of guests the album sketched a template that the band still follows to this day, mixing obscure and less obscure covers with original songs composed by Wyman and Taylor. Some of the musicians featured still figure in the band’s touring line-up that Louder Than War witnessed a couple of years ago (Geraint Watkins, Frank Mead, Nick Payn, Beverley Skeete).  It’s a testament to the duos songwriting chops that their co-writes (“Stuff (Can’t Get Enough)”, “Bad To Be Alone”, “Going Crazy Overnight”) fit in seamlessly with the covers. Mike Sanchez’s take on “Jitterbug Boogie” steals the show but there is plenty to enjoy including a rocking version of “Tobacco Road” featuring Paul Carrack on vocals and Peter Frampton on lead guitar.

The second album “Anyway The Wind Blows” named after the JJ Cale classic originally came out in February 1999. The band was now a well oil live unit following the touring period after the release of “Struttin Our Stuff”. Georgie Fame does a good job on the title track but the southern swamp charm of the original gets a bit diluted by the female backing vocals. If one reproach can be made about the Rhythm Kings studio recordings is that there is sometime a bit too much sugar coating on the backing vocals.  The swinging “Walking One and Only” penned by the now sadly departed Dan Hicks is tailor made for Mr Fame and Dave Hartley’s excellent piano playing. Berverly Skeete takes a greater share of the lead vocals singing lead on all the original songs apart from “Struttin’ Our Stuff” sung by Mike Sanchez. Two excellent tracks featuring harmonicist Geoff Grange on lead vocals originally left off the album make an appearance as bonus tracks (Buster Brown’s “Sugar Babe” is still a regular feature in the bands live shows, usually sung by the great Frank Mead).

The Rhythm Kings have released numerous officials bootlegs and two appear on this first set. The first “Live In Europe” was recorded during the band European tour in 1998 (mostly at a show at The Vega Club in Copenhagen). Gary Brooker and Georgie Fame share the lead vocals on a set of entirely new covers. An excellent version of “Let The Good Times Roll” sees Fame and Brooker share the microphone with some extra courtesy of Mrs Skeete. A combination which is used again on a 15 minute medley of “Hit The Road Jack” and “Fever”. “Mystery Train” sung by Georgie Fame features some nifty Johnny Burnette guitar picking courtesy of Albert Lee and harmonica (probably Nick Payn as Frank Mead wasn’t on this tour). The album closes on a rip-roaring of Johnny Burnette’s “Tear It Up” sung by Albert Lee.

The second live bootleg was recorded during the bands 2000’s UK tour with a similar line-up. Only “Mystery Train” appears again and we are treated to another  completely new selection of covers (these guys weren’t lazy in renewing their setlists). The band tries some different things with an almost reggae number entitled “Lead Me To The Water” from Brooker’s 1983 solo release of the same name. As usual Albert Lee excels on guitar (and vocals) as proved by his takes on “I’m Ready” and “Jump, Jive and Wail”. The rather fantastic version of “Georgia On My Mind” featuring only Georgie Fame on vocals and Martin Taylor on guitar closes the proceedings on a very high note.

~
Bill Wyman’s website is here: billwyman.com. He’s also on Facebook and he tweets as @bill_wyman.
All words by Craig Chaligne. More from Craig can be found at his Author Archive. He tweets at @ChaligneCraig.