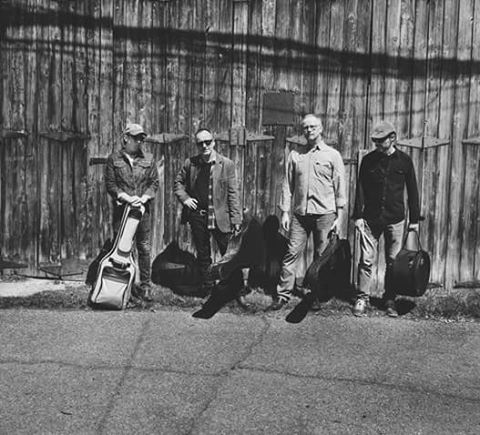 It’s for such discoveries that we will always be grateful to have small music venues like The Green Note. While visiting it last month to see Boo Hewerdine, I picked up the August to October program and was intrigued by the blurb for the 9th of October with two northern American artists on the bill. First band Bill Wood and the Woodies was described as “killer pop rock songs that draw comparison with Nick Lowe and early Elvis Costello” and Jonathan Byrd as “one the top 50 songwriters of the last 50 years”. Right up my street I said to myself and proceeded to purchase a ticket. Bill is something of a Rock’n’roll Survivor, having fronted Canadian pop-rockers Eye Eye in the 1980’s. After the demise of the band, he spent the next 20 years devoting his time to his family and building a career in property refurbishment. He never stopped writing songs and made his return with the excellent “Take It” in 2007. The Woodies were formed in 2012 and the songs for their latest LP  “Oh Look” were developed during local gigs in Canada. The album was picked up by independent label Fish Records which led to the first Bill Wood and The Woodies UK tour where they have been opening for Jonathan Byrd (also a Fish Record artist).

The Woodies barely managed to squeeze on the tiny stage of The Green Note, Bill thanked his musicians for coming over to tour with him and then launched into the first song of the night. The set list featured songs from both  “Take It” and “Oh Look”. The Woodies are an excellent band with guitarist Chris Bennet  shining with some tasty solos and colouring the songs with subtle touches (in a way not too dissimilar to Mike Campbell on Tom Petty’s songs). Bill seemed a bit nervous but genuinely pleased to be playing in London and thanked the audience profusely in-between the songs. He told that the inspiration behind “Beautiful Boys” was a glam-rock outfit called “Palace Laundry” (name inspired by a photo of Mick Jagger wearing a t-shirt with that mention on it) of which he was part of in the seventies. The single of the album “Push Ahead” features a chorus that sticks in your head. “Silver Wings” (sounds like a Charlie Rich out-take) and the the rollicking “Let’s Get Out Of Here” closed an all to short set. Special mention to the rhythm section of Mark Shannon and Paul Spencer who were actually playing together for the first time and did a splendid job.  Hopefully they will be back on these shores soon.

It was then time for Jonathan Byrd’s performance and after a meticulous set-up, he started the proceedings with “I Was an Oak Tree”, a song from his 2010 album “Cackalack”. He has been touring steadily for the last 15 years and it shows in his singing technique and his between song banter. He manages to keep his audience enthralled with a perfectly balanced setlist and just the right amount of stories. Jonathan seems to be quite the history buff. He takes great care in the audience knowing what he is singing about and some of the historical background he gave was almost as interesting as the songs themselves. Particular highlight was “Diana Jones”, a very sad tale of a Cherokee woman that Byrd  links to the the Indian Removal Act, managing to encapsulate the fate of an entire population in a four minute song. Still there were some lighter moments during the gig with the jaunty “Chicken Wire” or an a cappella version of “Poor Johnny” with the audience deputizing for the gospel backing vocals you find on the recorded version. The set featured a couple of songs co-written or written by Toronto based singer songwriter Corin Raymond. The excellent “A Big Truck Brough It” is begging for a cover version by Bill Kirchen. Again like Bill wood, we hope Jonathan will be back in the UK soon and with his trio this time or with Danish band The Sentimentals with whom he has been collaborating.