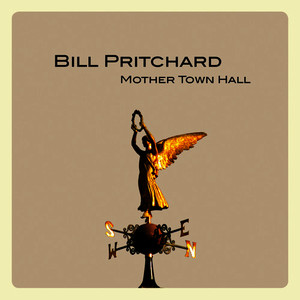 Literate eighties and nineties songsmith Bill Pritchard confirms his great return with his album “A trip To The West Coast” with his new effort “Mother Town Hall”. Louder Than War’s Craig Chaligne reviews.

After a decade long absence from the music scene, Bill Pritchard came back in 2014 with an excellent album released by the German label Tapete records. Tapete  possesses quite a stable of what for lack of a better word you would call “eighties literate singer songwriters” : Lloyd Cole, Robert Forster, Stephen Duffy and of course Bill.  Pritchard found some success in France in the late eighties, early nineties. After the demise of his band  “Beatitude” (French word for bliss) in the mid nineties, Bill quit France and returned to England to become a teacher. He released “By Paris, By Taxi, By Accident” in 2005 that came out on the French Market and saw him touring the country and opening for Daniel Darc at the Olympia theatre in Paris. Bill’s return with Tapete seems to be destined to last this time as “Mother Town Hall” was recorded hot on heals of the release “A Trip To The Westcoast”.

As did its predecessor with “Grantham” it boasts a great single with “Saturn and Co” which contains a fine chorus of “la-la-la’s” maliciously synchronized with a guitar lick. The breezy “Mont Saint Michel” with its jangly arpeggios and the jazzy sparseness of “My First Friendship” with its brushed drums, electric piano and crooned vocals show the maturity of Pritchard’s songwriting. The album is sonically more ambitious than its predecessor, the perfect example being the horn section on “Vampire To New York” that coupled with an insistent banjo in the background colours the song nicely. “15A Holy Street” sounds like a latter day Echo and The Bunnymen track (wouldn’t have sounded out of place on “What Are You Going To Do With Your Life ?”). “Deja  Vu Boutique” is a perfect slice of Chamber pop with its few sparse notes of piano interwoven with chord arrangements while “Heaven” is as good a pop song you’ll ever get with nice jangly guitars firmly anchored on a bed of organ. The groovy “September Haze” is perfectly arranged with just the right amount of strings, Pritchard’s slightly nasal tone suits the song really well. “Victorious” and “Mother Tongue” put the horns to good use again.  Mother Town Hall really is an excellent record, hopefully Bill won’t do another one of his disappearing acts again !!!